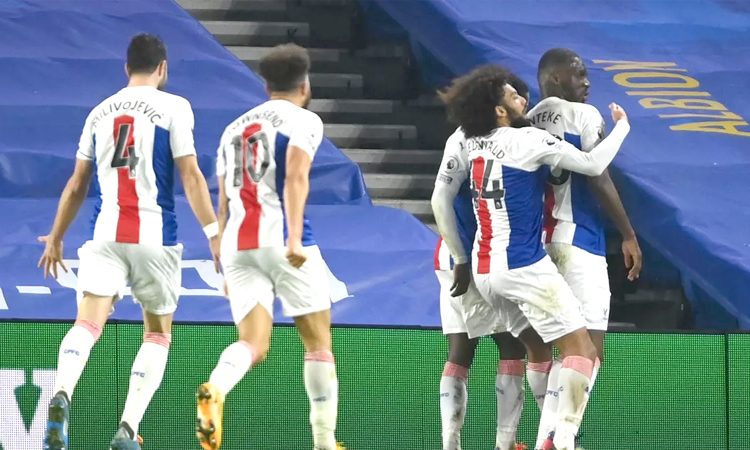 BRIGHTON, February 23: Christian Benteke’s stoppage-time volley earned Crystal Palace a dramatic 2-1 victory at Brighton & Hove Albion in the Premier League on Monday, despite the visitors being second best for much of the contest.

Palace took the lead as loan signing Jean-Philippe Mateta scored his first goal in English football with an improvised finish in the 28th minute.
Brighton improved after the break and pulled level in the 55th minute through Joel Veltman, who swept home his first goal for Graham Potter’s side as the ball broke loose in the penalty area.
The chances kept coming for Brighton as they finished the match having had 25 shots at goal.
But Palace, from just three efforts, scored twice, with Benteke popping up with the winner to break Brighton hearts in the 95th minute.
The win moved Palace up to 13th in the standings on 32 points. Brighton remained 16th on 26 points, four points clear of the relegation zone.
New COVID-19 cases remain low in Premier League for third week
For the third week in succession the Premier League announced only two new positive COVID-19 cases during its latest round of testing.
A statement said 2,633 players and club staff had been tested between Feb 15-21.
Positive cases have fallen sharply in the Premier since they peaked at 36 in early January when the UK went back into lockdown. (Reuters)