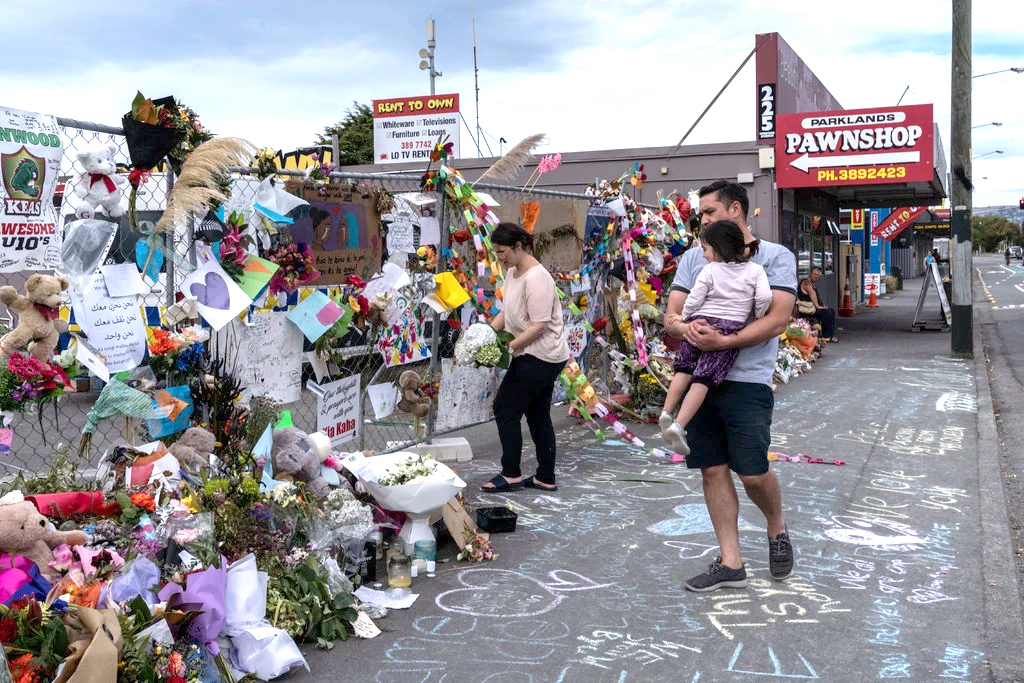 A makeshift memorial to victims of the shooting in Christchurch, New Zealand, in front of the Linwood Mosque in March.Credit... Adam Dean for The New York Times

NEW DELHI, AUGUST 27: New Zealand mosque gunman Brenton Tarrant was sentenced to life in prison without parole on Thursday for the massacre of 51 Muslim worshippers last year.
Judge Cameron Mander said Tarrant’s crimes were so wicked that a life time in jail could not begin to atone for them. He said they had caused enormous loss and hurt and stemmed from a warped and malignant ideology.
While announcing a sentence unprecedented in New Zealand legal history, Mander said, “It is incumbent on the court to respond in a way that decisively rejects such vicious malevolence”.
The Judge said Tarrant had failed in his aim of promoting right-wing extremism as he gunned down victims in cold blood but the New Zealand Muslim community had still paid a terrible price.
“It was brutal and beyond callous. Your actions were inhuman,” the judge said.
On imposing a sentence of life without parole, Justice Mander said, “If not here, then when?”
A sentence without parole means the offender will not be given the opportunity to leave prison after serving only a portion of their total sentence.
Last year, Tarrant was charged with “terrorism”, according to the police.
The March 2019 attacks targeting people praying at the Al Noor and Linwood mosques shocked New Zealand and prompted new laws banning the deadliest types of semi-automatic weapons.
Tarrant pleaded guilty to 51 charges of murder, 40 counts of attempted murder and 1 charge of terrorism in March this year.
The terrorist filmed his actions for 17 minutes and published a long manifesto of more than 70 pages, justifying his extreme right-wing ideology and hatred of Muslims, which together with the video were published on social networks.
According to the prosecutors, Tarrant had flown a drone over the Al Noor mosque and researched the layout as he meticulously planned his attacks. He arrived with 6 guns including 2 AR-15s.
New Zealand Prime Minister Jacinda Ardern said Tarrant deserved a “lifetime of complete and utter silence”.
Ardern had earlier described the attack as one of New Zealand’s “darkest days”.
During the 4-day sentencing hearing, 90 survivors and family members recounted the horror of the attacks and the trauma they continue to feel.
Sara Qasem, whose father Abdelfattah Qasem died at the Al Noor Mosque, spoke of the last moments of his death, saying: “I wonder if he was in pain, if he was frightened, and what his final thoughts were. And I wish more than anything in the world that I could have been there to hold his hand and tell him it would all be OK.”
She struggled to hold back her tears, before looking at Tarrant and saying “these tears are not for you”.
(TS with inputs from agency)