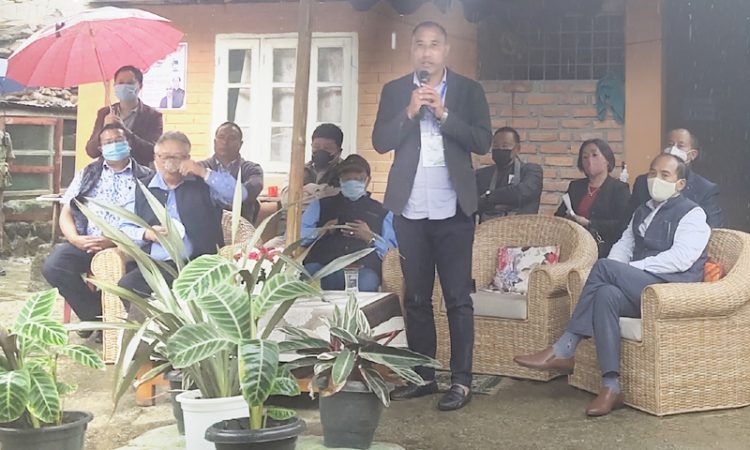 KIGWEMA, OCTOBER 22: Nationalist Democratic Progressive Party (NDPP) president Chingwang Konyak today called upon the electorates of 14-Southern Angami-I Assembly Constituency to continue to remain in the ruling Party.
Speaking during the NDPP flag hoisting ceremony in the residence of its official candidate at Kigwema village, under Kohima district, Konyak said NDPP is in ruling while the sitting MLA of the Constituency Late Vikho-o Yhoshu was also of the ruling Party.
Lamenting his unfortunate demise, Konyak said now the Party has set up Medo Yhokha as the official candidate for the November 3 bye-election.
He therefore said the regional party leaders and workers should work hard together to retain the seat.
Maintaining that Opposition NPF has also fielded its nominee while an Independent candidate is also contesting, NDPP president Konyak said “people (electorate) should be willing to be part of the ruling Government by electing Yhokha as their representative”.
He also urged the electorate not to believe in rumors and propagandas spread against the Government by the opposition parties.
Further, Konyak appreciated NDPP Kohima Region president Avio Tetso for remaining firm on the party principle despite being denied the party ticket and joining the election campaigns in support of Yhokha.
He expressed hope that even former MLA Medokul Sophie, who had also sought the Party ticket but denied, would also strengthen the hands of the official candidate.
NDPP working president, Alemtemshi Jamir conveyed best wishes to Yhokha saying being the party candidate is not just an honour but also a major responsibility.
He asked the people to understand that NDPP is in the ruling and still has another 2-and-half years to complete its tenure while it would come back to power even after the 2023 elections.
He therefore requested the electorate to show understanding and cooperate for the Party candidate’s win as NDPP is based on principles.
As the official candidate of NDPP for the bye-election, Medo Yhokha thanked the Party leaders and Chief Minister Neiphiu Rio for granting him the ticket
Asserting to work hard to increase the NDPP member in the State Assembly, Yhokha also sought blessing of the leaders and the cooperation of his fellow ticket seekers Tetso and Sophie to support and guide him for the overall success of the Party.
NDPP Kohima Region Working President Keduolhoulie Houzha chaired the programme.
Later, NDPP held the election rally for Yhokha at Kigwema Panchayat Hall, wherein its secretary general Abu Metha and ruling MLAs ~ Advisors Zhaleo Rio, Phukayi Sumi, Zale Neikhs and Mhathung Kithan wooed the electorate.
(Page News Service)