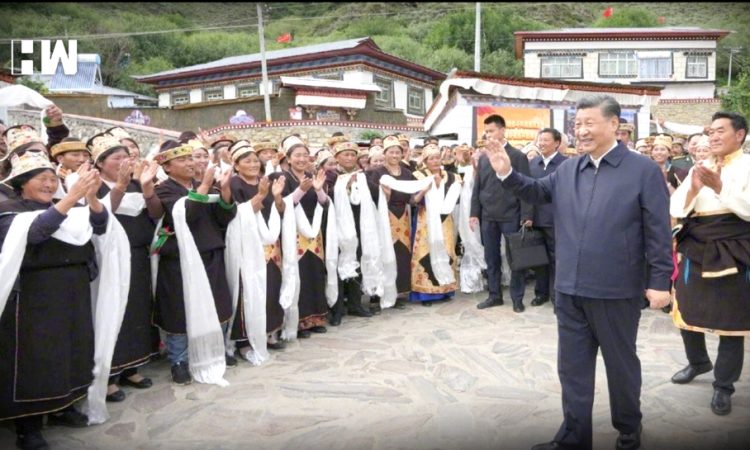 Beijing, July 23: Chinese President Xi Jinping has made a rare visit to Nyingchi, a strategically located border town close to Arunachal Pradesh, during his first visit to the politically sensitive region of Tibet where he underlined the need for “lasting stability” and “high-quality development” for the plateau region.

Xi was in Tibet from Wednesday, but his important visit was kept under wraps by China’s official media till the end of the trip on Friday due to the sensitivities of the trip.
On Wednesday Xi flew directly to Nyingchi not far from the Indian border after visiting several places in the city. Later he travelled to Tibet’s capital Lhasa by the recently commissioned high-speed bullet train.
According to state-run Xinhua news agency, Xi visited the Tibet Autonomous Region in connection with the 70th anniversary of Tibet’s “peaceful liberation the first time in the history of the Party and the country.”
During his visit, Xi stressed fully implementing the guidelines of the ruling Communist Party of China for “governing Tibet in a new era and writing a new chapter of lasting stability and high-quality development for the plateau region”, the report said.
China is accused of suppressing cultural and religious freedom in the remote and mainly Buddhist Himalayan region. China has rejected the accusations.
In footage released by state broadcaster CCTV, Xi, 68, was seen greeting a crowd wearing ethnic costumes and waving the Chinese flag as he disembarked from his plane at the Mainling Airport in Nyingchi.
Chinese leaders periodically visit Tibet. But Xi, who also heads the ruling Communist Party of China (CPC) and the powerful Central Military Commission — the overall high command of the Chinese military — is perhaps the first top leader in recent years to visit Tibet’s border town. He visited Tibet as Vice President in 2011 to commemorate the 60th anniversary of the peaceful liberation of Tibet”.
The last sitting Chinese President to officially visit Tibet was Jiang Zemin in 1990.
During his visit to Nyingchi, Xi, visited the Nyang River Bridge to inspect the ecological preservation in the basin of the Brahmaputra river, which is called Yarlung Zangbo in the Tibetan language.
China this year has approved plans to build a huge dam over the Brahmaputra river during the current 14th Five-Year Plan, which raised concerns in the riparian states of India and Bangladesh.
Nyingchi, known as the Switzerland of Tibet, is a prefecture-level city in Tibet that is adjacent to the Arunachal Pradesh border.
China claims Arunachal Pradesh as part of South Tibet, which is firmly rejected by India.
The India-China border dispute covers the 3,488-km Line of Actual Control (LAC).
Xi’s visit to Tibet took place amidst the current India-China military tensions in eastern Ladakh.
India and China have been locked in a military standoff at multiple friction points in eastern Ladakh since early May last year.
The two sides completed the withdrawal of troops and weapons from the North and South banks of Pangong Lake in February following a series of military and diplomatic talks.
The two sides are now engaged in talks to extend the disengagement process to the remaining friction points.
Nyingchi was in news in June when China fully operationalised its first bullet train in Tibet, which besides improving the connectivity in the remote Himalayan region also bolsters the Chinese military’s ability to move troops and weaponry to the Indian borders at a much faster pace.
The train connects Tibet’s provincial capital Lhasa with Nyingchi. It has a designed speed of 160 km per hour and operates on a single-line electrified railway covering 435.5-km.
The Lhasa-Nyingchi railway is Tibet’s first electrified railway.
After visiting a city planning hall, a village and a park in Nyingchi, Xi went to Nyingchi railway station and took the train to Lhasa. He inspected the construction along the railway during the ride, the Xinhua report said.
Also on Thursday, Xi went on an inspection tour of Lhasa.
He visited Drepung Monastery, Barkhor Street and the Potala Palace Square in Lhasa to learn about the work on ethnic and religious affairs, the conservation of the ancient city, as well as the inheritance and protection of the Tibetan culture and chatted with residents there, it said.
Potala Palace is the seat of power of successive Dalai Lamas in Tibet who besides being the spiritual heads of the Tibetan Buddhism also exercised power over the Himalayan region.
An official white paper on Tibet released by China in May this year, however, claimed that Tibet has been an integral part of it from ancient times and blamed the British imperialists for cultivating the Tibet Independence” concept.
The present Dalai Lama has been on a self-exile at Dharamsala in India ever since he fled Tibet in 1959 following the takeover of the Himalayan region by the Chinese military.
Beijing accuses him of being a “splittist” attempting to separate Tibet from China.
Since becoming President in 2013, Xi has pursued a firm policy of stepping up security control of Tibet. Beijing has been cracking down on Buddhist monks and followers of the Dalai Lama who despite his exile remained widely admired spiritual leader and worshipped by Tibetans.
Xi also pushed the Tibetan government and the military to strengthen border security by improving the infrastructure of the border villages including building new dwellings for residents.
Xi’s policies on Tibet includes the ‘sinicization’ of Tibetan Buddhism, bringing it in tune with the policies of the Communist Party.
Recent reports by foreign journalists visiting Tibet on a guided tour organised by the Chinese government reported Buddhist monks pledging loyalty to the CPC and Xi.
One monk at Lhasa’s historic Jokhang temple even named Xi as his spiritual leader.
Meanwhile, Chinese analysts said Xi’s visit shows Beijing’s emphasis on boosting the economic growth and stability of Tibet as well as improving local residents’ livelihoods in the next round of development.

“China has listed the development of border areas in the next five-year plan, and reducing the gap between western and eastern areas is also an important goal to be achieved marching toward the second centenary goal,” Lou Chunhao, deputy director of the Institute of South Asian Studies at the China Institutes of Contemporary International Relations, told the Global Times. (PTI)