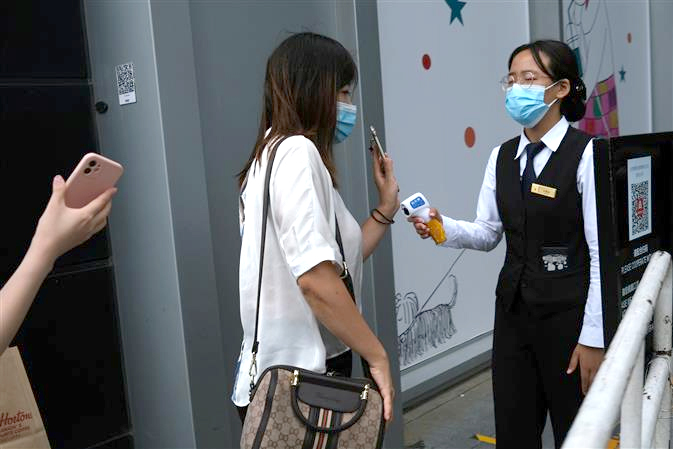 A woman shows her health codes to a security guard at an entrance to an office and commercial compound, following new cases of the coronavirus disease, in Beijing, China.

Beijing, August 3: Authorities in central China’s Wuhan, where the coronavirus first emerged in 2019 and spiralled into a pandemic, on Tuesday began testing of its over 11 million people following the resurgence of cases, a year after it contained the deadly virus, even as a sense of unease prevailed in the country as several provinces reported fresh infections.

Wuhan, which became famous all over the world for its first coronavirus lockdown early last year, broke the zero-infection record since June 2020, as seven new COVID-19 cases were reported.
Authorities began a citywide COVID-19 testing on Tuesday, the official media here reported.
The city has upgraded its epidemic response measures in the face of the recent coronavirus infections, locking down the area where COVID-19 infections have been reported while upgrading its risk levels, state-run Global Times reported.
The city metro has adopted stricter anti-epidemic rules, and all schools have been closed.
Just as Wuhan braced for the second COVID-19 resurgence, especially the Delta variant, several provinces and cities including Beijing are rushing to test millions of people.
The National Health Commission (NHC), in its daily report on Tuesday, said that 61 new locally-transmitted COVID-19 cases have been reported from different provinces, including Jiangsu, Hunan, Hubei, Henan, Yunnan besides Beijing, Shanghai and Fujian.
This is in addition to a host of imported cases of Chinese nationals returning home from different countries.
The municipal authorities of Zhangjiajie, a tourist destination in China’s south Hunan province where the new clusters of cases were reported, and spread to 15 Chinese provinces, banned people from leaving the city.
China has so far reported 93,193 COVID-19 cases, including 1,157 patients still receiving treatment, and 4,636 deaths.
The new infections raised concern over the Chinese vaccines, especially against the Delta variant, as China has administered 1.60 billion doses of the locally-made vaccines so far.
China’s top epidemiologist Zhong Nanshan claimed that the Chinese vaccines were effective against the Delta variant.
The Chinese COVID-19 vaccines can protect people against the Delta variant, Zhong said, referencing studies of some 100 patients who were infected with the variant in southern Guangzhou city in May.
The preliminary studies found that the Chinese vaccines are 100% protective against severe cases, and 76.9%, 67.2% and 63.2% against moderate cases, mild cases and asymptomatic infections respectively, Global Times quoted him as saying.
Zhong said that to achieve herd immunity through vaccination, China — which has a population of nearly 1.4 billion — needs to inoculate 83.3 per cent of its population.
Meanwhile, reports from Wuhan said that people were getting ready for the second COVID-19 outbreak.
A Wuhan resident surnamed Xiao told the Global Times that her residential community has set up a site for nucleic acid tests.
A resident of Zhuankou neighbourhood, who was the first to test positive in the latest spike, transmitted the virus to six other close contacts, prompting the officials to declare a lockdown.
Another seven communities near the infected patient’s workplace, a construction site in Wuhan’s Jingkai district, have also been put under closed-off management. All residents living within the communities will receive nucleic acid testing, the local health commission said.
All schools and tutorial institutions have been asked to suspend offline classes and strengthen campus health monitoring, speeding up the vaccination for teachers and students, the report said.
“Wuhan people are always on high alert of such things The subways in Wuhan are all empty now, as if people have disappeared suddenly,” a local resident said.
The city’s metro has reinforced stricter COVID-19 rules, making it mandatory to wear masks, measuring body temperature and checking health codes. Several stations near the Zhuankou neighbourhood are temporarily closed.
Some of my neighbours have been piling up food since last night, but I haven’t,” another resident said.
Major supermarkets in the city are now stockpiling their shelves to ensure there is full supply and prices are kept stable, the report said.
“Some would laugh and think that Wuhan people are overreacting, hiding away immediately after the epidemic strikes,” Dong, a local resident, said.
“But Wuhan shouldn’t bear such scolding. We are the ones that were once the most desperate, and the deep wounds have left us with a scar,” he added.