Sign in
Home Infotainment China’s love for Bollywood is growing

China’s love for Bollywood is growing 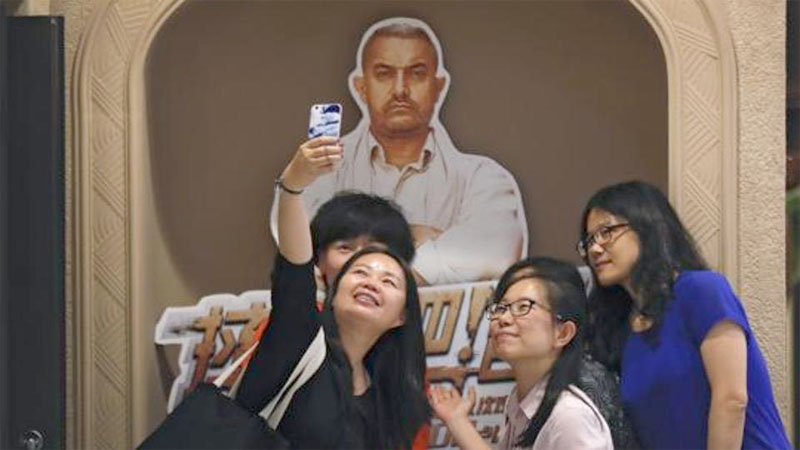 On a recent flight from Guangzhou to Urumqi in China’s northwest, the entertainment on overhead screens was Farhan Akhtar’s Rock On 2. There were hardly any South Asians on the plane, but many watched the film in its original Hindi soundtrack with Mandarin subtitles in rapt attention.
Whenever people across China encounter an Indian, the conversation usually veers to Bollywood– “Oh, I love Indian films” – and Aamir Khan, affectionately called “Mi Shu” or “Uncle Mi” and probably India’s biggest cultural export.
And top Chinese video streaming sites such as Youku, iQiyi and Tencent Video have sections dedicated to Bollywood.
China is in the throes of a love affair with Bollywood, one that has taken Indian filmmakers by surprise, leaving them scrambling to find new ways to capitalise on what is now the world’s biggest box office. According to Variety, theatrical revenues in China during the first quarter of 2018 were $3.17 billion, compared to $2.85 billion for North America.
“I enjoy watching Indian movies, especially the ones with Aamir and Salman Khan. I love the colourful costumes and dances,” says Ning Jing, a student planning to do her master’s in English in Australia, before breaking into an approximation of her favourite Bollywood tune.
Film industry insiders in China trace this love affair to the runaway success in 2010-11 of pirated versions of 3 Idiots, which wasn’t initially released in Chinese theatres. They credit Aamir Khan’s personal interest in the Chinese market – the star has visited thrice to promote his films – for Indian cinema’s increased profile.
In the past, Chinese were familiar with Indian classics such as Awara, screened on state-run television in the 1970s. In subsequent decades, there was a drought that finally ended with the massive success of films such as Toilet: Ek Prem Katha ($14.2 million), Hindi Medium ($32.7 million) and Bajrangi Bhaijaan (which grossed $45.5 million despite being released in China almost three years after its Indian debut).
Dangal ($193 million) and Secret Superstar ($119 million) outperformed Marvel’s Black Panther ($108 million) at the box-office even though the US has more slots than India in China’s quota system that allows in only 34 foreign films annually.
Some attribute this success to the stories of these movies, replete with themes that resonate in China – the education system, women’s rights, relations within families and domestic violence.
Liu Xin, a young Beijing-based professional, says: “Indian movies reflect profound issues and they show how Indians are bravely taking on such issues. In Dangal, we see how a father teaches his daughters to fight against discrimination against women.
“In Bajrangi Bhaijaan, we see how a man helps a girl from a different religion. But sometimes, I can’t help but feel that some of the songs and dances are irrelevant.”
Allen Liu, CEO of E Stars Films that has distributed hit Indian films, says, “India and China are countries with a long Oriental history and culture. The mode of thinking in the East, emotional expressions and story-telling are alike. These two countries are developing so fast. So there are deep connections between Chinese audiences and Indian movies.”
Another executive engaged in the distribution of Indian films in China, who didn’t want to be named, says filmmakers will have to be careful about growing their presence in the country.
“Right now, things are good and people will try to get more product into the Chinese market. But India makes a lot of lousy movies. It’s the collective responsibility of the Indian film industry to maintain quality,” the executive says.
“The three films made under a joint production agreement signed in 2014 – Kung Fu Yoga, Buddies In India and Xuanzang – have done well but were nothing spectacular. Maybe the future is more exchanges of talent –Indian stars appearing in Chinese films and Chinese professionals, say fight choreographers and stunt coordinators, who are among the best, working on Indian movies.”