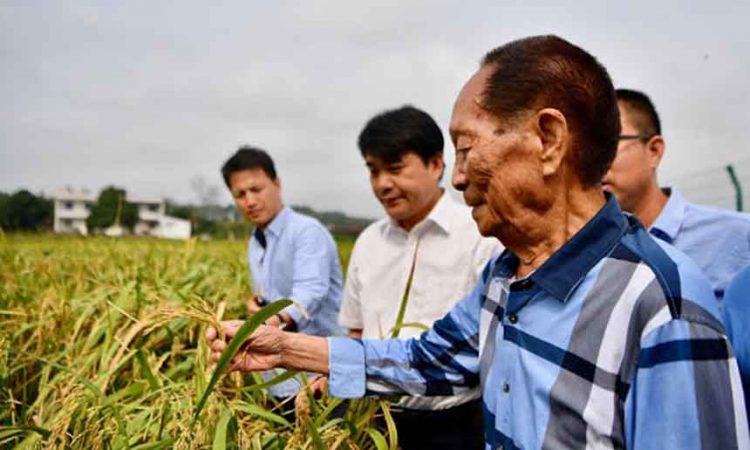 Beijing, May 22: Chinese scientist Yuan Longping, renowned for developing a hybrid rice strain that vastly improved the grain output in the country, passed on Saturday at the age of 91.
The top rice scientist passed away in a hospital in Changsha, capital of Hunan Province, due to multi-organ failure, state-run Xinhua news agency reported.

“A few words will suffice to remark on Yuan’s achievements: he helped the world fend off hunger,” Hu Peisong, director-general of China National Rice Research Institute, said.
Born in Beijing in 1930, Yuan succeeded in cultivating high-yield hybrid rice strain in 1973, which was later grown on a large scale in China and other countries to substantially raise output.
Over the next four decades, he continued to research and upgrade hybrid rice, which has now reached its third generation. Until early this year, he had been conducting research at a seed breeding base in Hainan Province.
“I saw heart-breaking scenes of people starving to death on the road before 1949,” Yuan had said, recalling an era when getting enough to eat was a serious problem in China.
“This was the main reason for me to stick to the hybrid rice research,” he had said.
In China, where rice is the staple for the majority of the 1.4 billion population, the annual planting area of hybrid rice has exceeded 16 million hectares or 57 per cent of the total planting area of rice, helping feed an extra 80 million people a year.
Its growth area overseas has reached 8 million hectares, according to the China National Hybrid Rice R&D Centre where Yuan worked.
His more recent achievements included developing varieties of saline-alkali tolerant rice with his team. In January, his team said they planned to use the rice to transform 6.7 million hectares of saline-alkali land in China over the next eight to 10 years.

Yuan’s lifelong dedication to reducing hunger has made him a national hero and household name in China, the Xinhua report said. (PTI)