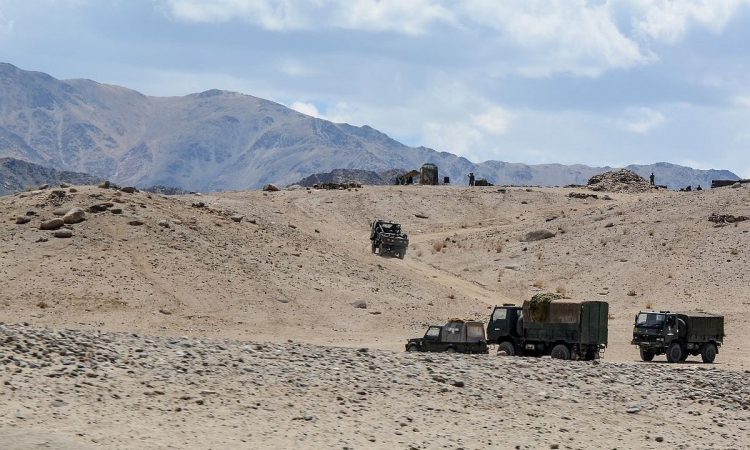 Nirendra Dev
New Delhi, July 6: In tune with the Government of India’s firm stance that status quo ante must be restored in all areas of eastern Ladakh, the Chinese Army – PLA – has reportedly moved back from patrolling point 14.
Though taken as initial and baby steps and first signs of de-escalation of tension in eastern Ladakh, however, sources say things may be too early to suggest any ‘end’ or scaling down of the recent tension between two Asian powers.
“Indian army at our end is monitoring the situation with caution….as while they have moved back; the Chinese heavy armoured vehicles were still present in-depth areas in Galwan river area,” a source said.
Prime Minister Narendra Modi had visited forward areas near Ladakh on July 3 giving a booster to the armed forces. His visit had given a clear message to China.
The latest development vis-a-vis withdrawal of Chinese forces also coincides with reports that the US has deployed two aircraft carriers in the South China Sea.
First signs of Chinese withdrawal came from Galwan and Pangong Tso areas.
The Chinese side has significantly enhanced its presence, particularly in areas between Finger 4 and Finger 8.
Sources say, NSA Ajit Doval and Chinese Foreign Minister, State Councillor and Special Representative on the Sino-Indian Boundary Issue Wang Yi spoke to each other over phone on Sunday and pushed the process of withdrawal of Chinese forces from the LAC.
An MEA statement said: “The two Special Representatives (Doval and Wang Yi) agreed that both sides should take guidance from the consensus of the leaders (PM Modi and President Xi Jinping) that maintenance of peace and tranquility in the India-China border areas was essential for the further development of bilateral relations and that two sides should not allow differences to become disputes”.
“Therefore, they agreed that it was necessary to ensure at the earliest complete disengagement of the troops along the LAC and de-escalation from India-China border areas for full restoration of peace and tranquility. In this regard they further agreed that both sides should complete the ongoing disengagement process along the LAC expeditiously,” the statement said.
A statement from Chinese foreign ministry on the retreat said: “Our bilateral relations (with India) have withstood tests and made hard-won progress. The right and wrong of what recently happened at the Galwan Valley in the western sector of the China-India boundary is very clear. China will continue firmly safeguarding our territorial sovereignty as well as peace and tranquility in the border areas”.
It further said – “As Wang Yi stressed, for both China and India, achieving development and revitalization is the top priority where we share long-term strategic interests. Both sides should adhere to the strategic assessment that instead of posing threats, the two countries provide each other with development opportunities”.
The Chinese statement also said: “Both sides should pay great attention to the current complex situation facing China-India bilateral relations, and work together to overcome and turn it around as soon as possible.”
On June 30, the Indian and Chinese armies held the third round of Lt General-level talks during which both sides agreed on an “expeditious, phased and step wise” de-escalation as a “priority” to end the standoff.
The first round of the Lt General talks were held on June 6 during which both sides finalised an agreement to disengage gradually from all the standoff points beginning with Galwan Valley
The Chinese Army has moved back tents, vehicles and troops by about 2 km from locations where
disengagement was agreed upon.
Sources said India has sent out a decisive message that national security is paramount.
Sources further said India has been insisting on ‘restoration’ of status quo ante in all areas of eastern Ladakh to restore peace and tranquillity and the issue of ‘disengagement’ had figured at the Corps Commander level talks.
The Chinese Army has moved back from the Patrolling point 14 — the location had emerged as a key hotspot in the ongoing dispute after Chinese troops had moved ahead of the Line of Actual Control (LAC) in the Galwan region.
Indian army lost 20 soldiers in the conflict on June 15.
Sources said a ‘buffer zone’ has been created (or will be created) between the Indian and Chinese troops.
There will be substantial withdrawal of Indian troops also from the border line, sources said.
Indian forces have lately enhanced its deployment along the LAC and matched presence with bunkers and even a few temporary structures.
The ‘retreat’ by PLA if fructifies without any enhanced tension or conflict yet again, it would be seen as a major diplomatic and strategic win for the Modi government after the fresh clash wherein 20 Indian soldiers attained martyrdom and there were over 40 casualties in the Chinese side.
However, it is altogether a different chapter that the Chinese government has not officially admitted about the deaths of its soldiers.
The US move to deploy two aircraft carriers in the South China Sea has its own significance.
The two Special Representatives – Doval and Wang Yi – agreed that the diplomatic and military officials of the two sides should continue their discussions.
It was also agreed that the two Special Representatives will continue their conversations to ensure full and enduring restoration of peace and tranquillity in the India-China border areas in accordance with the bilateral agreements and protocols.