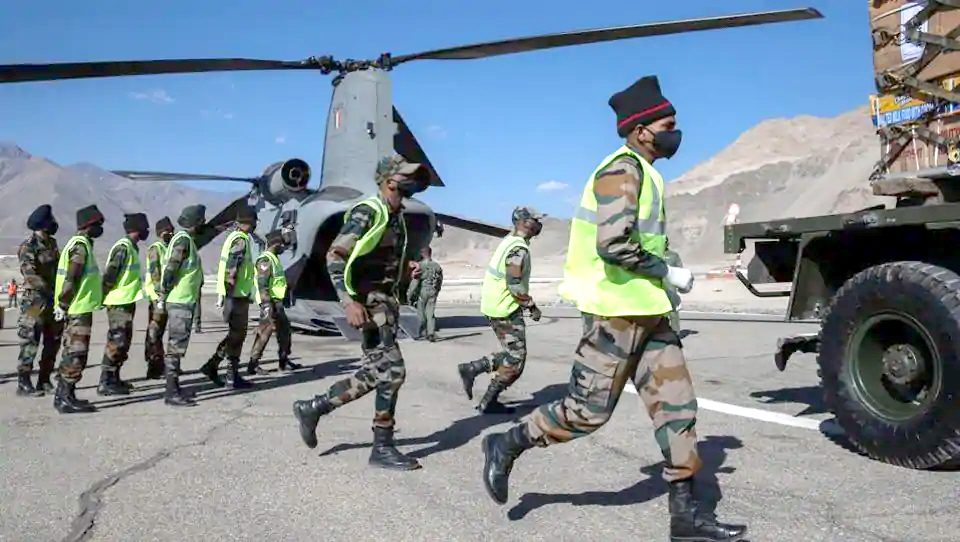 Soldiers run to load an Indian Air Force's Chinook helicopter with supplies at a forward airbase in Leh, Ladakh. (Reuters)

Beijing, September 29: China on Tuesday said it does not recognise the “illegally” constituted Ladakh union territory, adding it was opposed to India building military infrastructure in the border areas.
The Chinese foreign ministry said neither India nor China should engage in activities in the border region that could complicate the situation, brushing aside its own infrastructure-building by saying it was on their side of the Line of Actual Control (LAC).
Beijing also denied reports that it had built new military bases near LAC, saying they were driven by “ulterior motives”.
Responding to a question on India building a high-altitude road network in Ladakh, foreign ministry spokesperson Wang Wenbin said: “China has not recognised Ladakh union territory illegally set up by the Indian side. We are opposed to conducting infrastructure development for military purposes in the border area.”
India’s strengthening of infrastructure in the region comes amid the worst border tension with China in decades in eastern Ladakh, where border troops from the two countries are locked in a face-off since May.
“Based on the two sides’ consensus, no side should engage in the border areas in any activities that might complicate the situation to avoid undermining two sides’ efforts to ease the situation,” Wang added.
China had responded strongly in August, 2019, after New Delhi had stripped Jammu & Kashmir of its special status and bifurcated the state as two separate union territories of J&K and Ladakh.
“China has always opposed India’s inclusion of Chinese territory in India’s administrative jurisdiction in the western part of the Sino-Indian border. This position is firm, consistent and has never changed,” the foreign ministry had said in a statement at the time.
“In recent days, the Indian side has continued to undermine China’s territorial sovereignty by unilaterally amending its domestic laws. This practice is unacceptable and will not produce any effect,” the 2019 statement had said.
When Wang was asked on Tuesday to comment on China’s advanced infrastructure in the region, he initially denied that Beijing was building new military facilities in the region.
“First, some institutions once released the so-called information on new military bases or facilities China has built on its side. Such reports are completely false. They are driven by ulterior motives,” Wang said.
Then he went on to add that Beijing follows all border agreements signed with India.
“Second, China consistently and strictly abides by the agreements signed with the Indian side. We are committed to maintaining peace and stability along the border with India; at the same time, we firmly safeguard our sovereignty, territorial integrity and security.
“For a long time, (the) Chinese side have been conducting activities on the Chinese side of the LAC and they have always complied with relevant agreements.”
The spokesperson added: “We hope the Indian side to work for the same purpose, together with China to achieve the cooling of temperature on the ground and to prevent adding complex factors to the two sides’ concerted efforts to ease the situation.”
Wang was also asked to comment on the quadrilateral, or Quad, meeting of officials from India, Australia, and the US in Japan next week.
External affairs minister S Jaishankar will hold talks with his counterparts from the US, Japan and Australia in Tokyo on October 6 for the Quad meeting. They will discuss their common regional concerns, such as China’s increasingly assertive actions, in the first face-to-face ministerial meetings Japan will host since the coronavirus pandemic began, the Associated Press news agency reported.
Wang warned that no “exclusive clique” should be formed, indicating that Beijing was closely following the development and progress of the Quad.
“Peace, development and global cooperation is the overriding trend of today’s world. Multilateral and plurilateral cooperation should all be open, inclusive and transparent. No one should seek an exclusive clique,” he said.
“Efforts should be made to enhance regional countries mutual understanding and trust, instead of targeting a third party or harming third party’s interests.”
“We hope the relevant county will proceed from the interests of regional countries and do more things conducive to regional peace, stability and development instead of the contrary.” (Courtesy: HT)