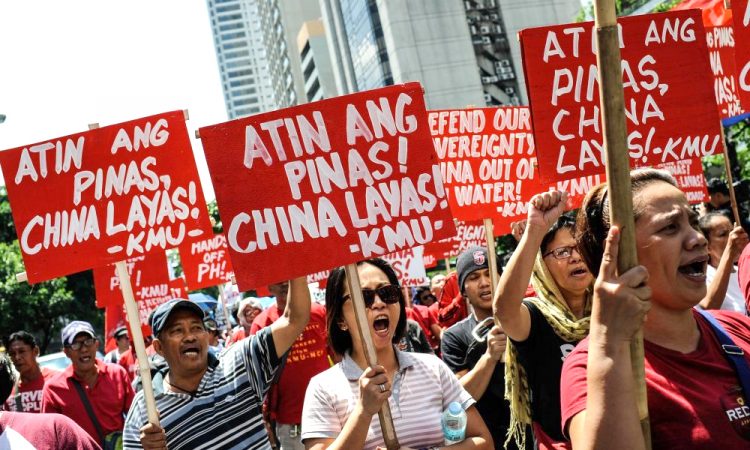 Anti-China protesters mount a rally against China's territorial claims in the Spratlys group of islands in the South China Sea in front of the Chinese Consulate on July 12, 2016 in Makati, Philippines. (Dondi Tawatao/Getty Images)

Beijing, July 12: A defiant China on Monday dismissed the 2016 verdict of the international tribunal on the South China Sea, rejecting its claims over the area as a piece of waste paper and brushed aside US’ fresh backing for the judgement as a political farce to smear Beijing.

The Chinese Foreign Ministry spokesman Zhao Lijian’s remarks came as the People’s Liberation Army (PLA) claimed to have expelled US Navy destroyer USS Benfold which sailed through the South China Sea (SCS), coinciding with the fifth anniversary of the verdict to assert freedom of navigation.
Without authorisation from the Chinese government, the US guided-missile destroyer illegally trespassed into China’s territorial waters and the PLA Southern Theatre Command organised maritime and aerial forces to track and monitor it and warned it away, Senior Colonel Tian Junli, spokesperson of the command, said in a statement.
The US has been periodically conducting such naval and aerial missions through the SCS to challenge China’s claims.
On the fifth anniversary of the international tribunal on the SCS, which had delivered a stunning blow to China’s expansive sovereignty claims over the all-important sea trade route, the Biden administration upheld the previous Trump-era backing to the tribunal verdict.
In a stern warning to China, US Secretary of State Antony Blinken on Sunday said that any attack on the Philippines by Beijing would draw Washington’s response under a mutual defence treaty with the Philippines.
Reacting to Blinken’s statement, Zhao told a media briefing here that the ruling is illegal, null and void and a waste paper.
China will not accept or participate in this tribunal, will not accept or acknowledge this ruling, he said, reiterating that Beijing will continue to exercise its control over the area in the SCS.
The sovereignty and rights of China on the SCS will not be affected by the ruling and China will not accept any assertion or act based on this ruling, Zhao said.
He termed the tribunal as a “political farce”, saying the US was the culprit and manipulator of this farce to smear China.
This time the US uses the fifth anniversary of the ruling to hype the SCS issue. This political attempt is clear, the Chinese Foreign Ministry spokesman said.
On Blinken’s threat to invoke a bilateral defence treaty with the Philippines if Beijing attacks Manila, Zhao accused the US of abusing the bilateral military agreements with Cold War mentality to use force on China which exposes their strong power logic and hegemonic attempts .
On July 12, 2016, the tribunal struck the worst blow to China’s claims over almost all of the SCS, saying its much-touted nine-dash line has no legal basis.
The Tribunal concluded that there was no legal basis for China to claim historic rights to resources within the sea areas falling within the nine-dash line’, the five-judge tribunal appointed by the Permanent Court of Arbitration (PCA) based in The Hague adjudicating on the petition filed by the Philippines had said.
Striking down the core of China’s claims over the 90 per cent of the SCS based on historic rights, the Tribunal concluded that, to the extent China had historic rights to resources in the waters of the SCS, such rights were extinguished to the extent they were incompatible with the exclusive economic zones provided for in the Convention (UN Convention on the Law of Seas — UNCLOS) .
The Tribunal also noted that there was no evidence that China had historically exercised exclusive control over the waters or their resources, as claimed by Beijing.
For decades, China — which boycotted the tribunal questioning its legality — has been asserting that its emperors discovered the islands hundreds of years ago and have been exercising control over the area throughout history.
But its claims came into conflict with the Philippines, Vietnam, Malaysia, Brunei and Taiwan as they hardly have Exclusive Economic Zones (EEZ) provided by UNCLOS, which Beijing declined to recognise.
Five years on, Beijing not only remained defiant but also consolidated its claims over the area, building artificial islands backed by military installations fitted with missiles and an airport.
China has also managed to silence the Philippines, which won the case with offers of billions of dollars of investments, with its President Rodrigo Duterte maintaining a steady silence amidst a decisive build up by China in the region.
Endorsing the stand of his predecessor Mike Pompeo, who was the US Secretary of State under the presidency of Donald Trump, Blinken said: nowhere is the rules-based maritime order under greater threat than in the South China Sea .
He charged China of continuing “to coerce and intimidate Southeast Asian coastal states, threatening freedom of navigation in this critical global throughway .
We also reaffirm that an armed attack on Philippine armed forces, public vessels, or aircraft in the South China Sea would invoke US mutual defence commitments, Blinken said.
It was a shift from the Obama administration’s policy according to which maritime disputes between China and its neighbours be resolved peacefully through UN-backed arbitration.
In his lengthy response, Chinese Foreign Ministry spokesman Zhao said that Blinken’s statement disregards the historical merits and objective facts on the SCS issue, deliberately stokes disputes on sovereignty and maritime rights and interests, sows discord among regional countries and undermines regional peace and stability.
He said countries outside the region should respect efforts made by the regional countries in the SCS.
China will unswervingly safeguard its sovereignty and security Zhao said, highlighting China’s talks with regional countries to resolve disputes.
He also rejected the US allegations of China’s threat to the freedom of navigation.
With the joint efforts by China and regional countries for a period of time, the SCS maintained its smoothness and security and no vessels were obstructed, security threatened. The statement by the US that the freedom of navigation (is) threatened cannot hold water, Zhao said.
He also accused the US of stepping up air and naval reconnaissance missions over the SCS.

Since the beginning, this year the US conducted nearly 2,000 close reconnaissance missions in China’s waters and airspace and more than 20 times of large-scale maritime drills, he added. (PTI)