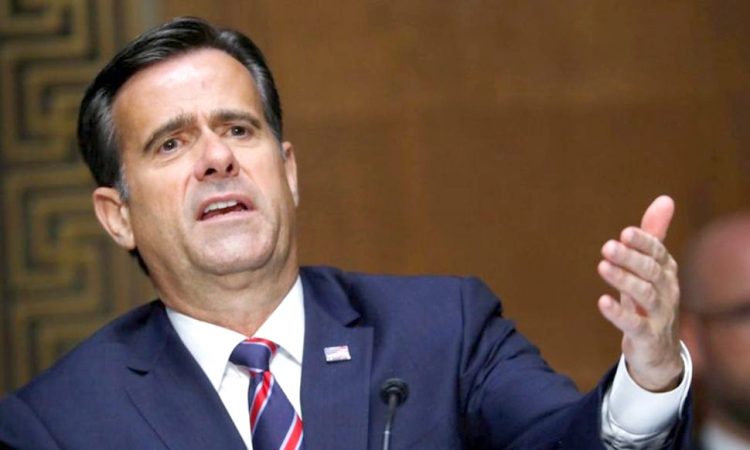 Washington, December 4: China is the “greatest threat” to democracy and freedom since World War II and Beijing was preparing for confrontation with the US and intended to dominate the world “economically, militarily and technologically”, according to America’s top intelligence official.
Writing in the Wall Street Journal, Director of National Intelligence John Ratcliffe said China was growing its power by stealing US secrets and then replacing US firms in the market.
The Trump administration has taken a hard line on China, imposing tariffs on Chinese goods and accusing Beijing of intellectual property theft.
“The intelligence is clear: Beijing intends to dominate the U.S. and the rest of the planet economically, militarily and technologically. Many of China’s major public initiatives and prominent companies offer only a layer of camouflage to the activities of the Chinese Communist Party,” according to Ratcliffe.
The Trump administration’s most senior intelligence official’s stark warning was just the latest from senior administration officials about China’s intentions, with some warning of possible military action in Asia and others pointing to unprecedented efforts to influence the incoming Biden administration.
The op-ed comes as the Trump administration has recently taken several punitive measures against Beijing, sharply limiting visas for members of the ruling Communist Party of China and unveiling new sanctions on Chinese companies.
The Trump administration also ordered China to close their consulate in Houston earlier this year due to allegations that Chinese diplomats at the mission were intimidating US citizens and carrying out espionage efforts.
Secretary of State Mike Pompeo earlier this year defined China’s Communist Party as the “central threat of our times.”
“This generation will be judged by its response to China’s effort to reshape the world in its own image and replace America as the dominant superpower. The intelligence is clear. Our response must be as well,” Ratcliffe wrote in the op-ed piece.
“Beijing is preparing for an open-ended period of confrontation with the U.S. Washington should also be prepared. Leaders must work across partisan divides to understand the threat, speak about it openly, and take action to address it,” he added.
In Beijing, Chinese foreign ministry spokesperson Hua Chunying dismissed Ratcliffe’s article as yet another move to spread false information, political viruses and lies” in hopes of damaging China’s reputation and China-US relations.
“It offered nothing new but repeated the lies and rumours aimed at smearing China and playing up the China threat by any means,” Hua said at a daily briefing on Friday.
“It’s another hodgepodge of lies being produced by the relevant departments of the US government for some time,” she said.
Ratcliffe also accused Chinese intelligence services of introducing vulnerabilities into technology offered by top Chinese tech firms such as Huawei and said allies using Chinese technology would not have US intelligence shared with them.
He said US intelligence showed that China had carried out “human testing” on troops with the aim of developing soldiers with “biologically enhanced capabilities”.
He said China had engaged in a “massive influence campaign” targeting US members of Congress and their staff by encouraging unions at big firms to tell local politicians to take a softer line on China or face losing union members’ votes.
Beijing was targeting members of the US Congress with “six times the frequency of Russia and 12 times the frequency of Iran”, Ratcliffe said.
Other countries faced the same challenge from China as the US, he said.
“China believes that a global order without it at the top is a historical aberration,” he said. “It aims to change that and reverse the spread of liberty around the world.” (PTI)