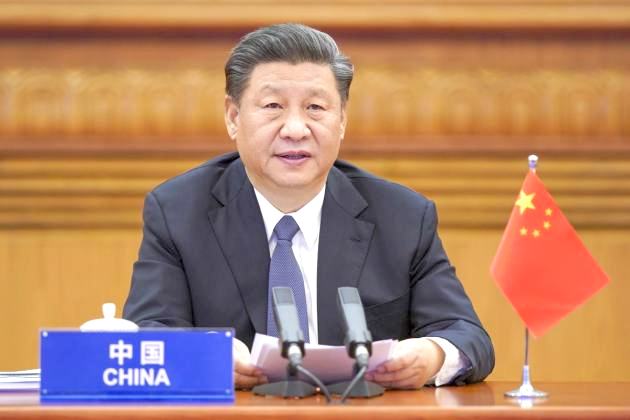 New Delhi/Davos, January 25: Committing to bridge differences by dialogue and resolve disputes through negotiations with other countries, Chinese President Xi Jinping on Monday warned against ‘beggar-thy-neighbour’ policies and said the strong should not bully the weak by “showing off strong muscles or waving a big fist”.

He also cautioned that any type of confrontation, be it in the form of “cold war, hot war, trade war or tech war”, would eventually hurt all countries’ interests and undermine everyone’s well-being.
“We should respect and accommodate differences, avoid meddling in other countries’ internal affairs, and resolve disagreements through consultation and dialogue,” he said in a special address at the World Economic Forum’s week-long online Davos Agenda Summit, which will also be addressed by Prime Minister Narendra Modi on Thursday.
“We have been shown time and again that to beggar thy neighbour, to go it alone, and to slip into arrogant isolation will always fail,” President Xi said.
‘The Beggar thy neighbour’ policies typically mean economic measures adopted by a country to address its own problems, but they worsen the situation for other countries.
While he did not name any country, China’s relationship with a few countries, mainly the US and India, has deteriorated badly in the recent past. It remains to be seen what might change in US-China relations under the presidency of Joe Biden, who took charge as the US president less than a week ago.
China has also faced a lot of flak from some quarters for its initial handling of COVID-19, which was first reported in late 2019 in the Chinese city of Wuhan.
President Xi said China will continue to take an active part in international cooperation on COVID-19, as containing the virus remains the most pressing task for the international community.
“Global public health governance needs to be enhanced. No global problem can be solved by any one country alone. We need to give full play to the role of the World Health Organization in building a global community of health for all,” he said.
He also said reforms of the World Trade Organization must be advanced.
President Xi advocated for addressing international affairs through consultation.
“To build small circles or start a new Cold War, to reject, threaten or intimidate others, to willfully impose decoupling, supply disruption or sanctions, and to create isolation or estrangement will only push the world into division and even confrontation,” he said.
He called for the entire world to join hands and letting multilateralism light the way towards “a community with a shared future for mankind”.
Stressing that China will continue to promote a new type of international relations, he said, “Zero-sum game or winner-takes-all is not the guiding philosophy of the Chinese people.”
“As a staunch follower of an independent foreign policy of peace, China is working hard to bridge differences through dialogue and resolve disputes through negotiation and to pursue friendly and cooperative relations with other countries based on mutual respect, equality and mutual benefit,” President Xi said.
He also said China will further deepen South-South cooperation and contribute to the endeavour of developing countries to eradicate poverty, ease debt burden and achieve more growth.
“China will get more actively engaged in global economic governance and push for an economic globalisation that is more open, inclusive, balanced, and beneficial to all,” he added.
He said it serves no one’s interest to use the pandemic as an excuse to reverse globalisation and go for seclusion and decoupling.
“As a long-standing supporter of economic globalisation, China is committed to following through on its fundamental policy of opening-up. China will continue to promote trade and investment liberalisation and facilitation, help keep the global industrial and supply chains smooth and stable, and advance high-quality Belt and Road cooperation,” he said. (PTI)