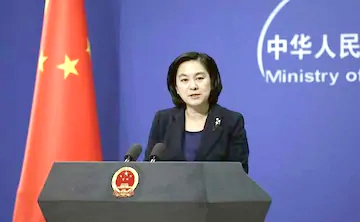 Beijing, January 20: China on Wednesday dismissed Washington’s declaration that Beijing was committing genocide against Uighurs and other minorities as “outrageous lies” and “poison”.

Foreign ministry spokeswoman Hua Chunying blamed the declaration of genocide on outgoing Secretary of State Mike Pompeo, accusing him of fabricating “sensational false propositions” throughout his term in office.
Pompeo said Tuesday Beijing’s sweeping incarceration of mostly Muslim minorities in the far western Xinjiang region amounted to genocide and crimes against humanity.
“We are witnessing the systematic attempt to destroy Uighurs by the Chinese party-state,” Pompeo said, in final broadsides at Beijing after a combative near three-year tenure as America’s top diplomat.
Hua on Wednesday said genocide had “never happened in the past, is not happening now and will never happen in China”.
Rights groups say at least one million Uighurs and other Turkic-speaking Muslims are incarcerated in camps in Xinjiang.
Witnesses and activists say that China is seeking to forcibly integrate the Uighurs into the majority Han culture by eradicating Islamic customs, including by forcing Muslims to eat pork and drink alcohol — both forbidden by their faith.
Independent access to the sensitive area is highly restricted. (AFP)

Important to incentivise Taliban so that they fulfil promises, says Pak PM