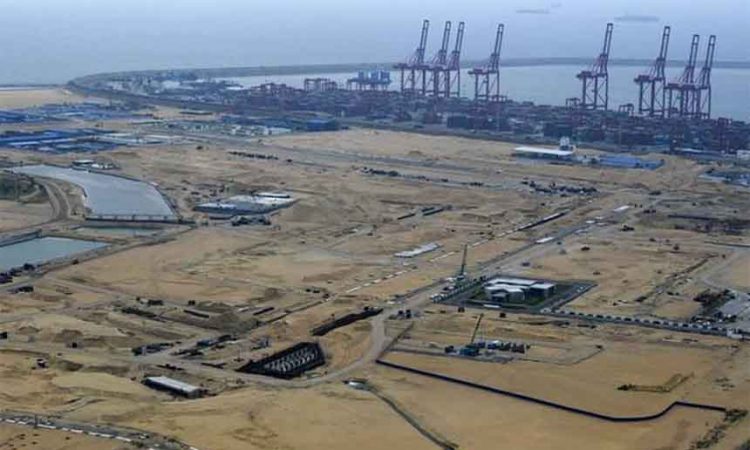 Colombo, April 17: The China-backed Port City in Colombo, which has been exempted from a series of local laws, is no threat to the country’s sovereignty and would only function as a single window facilitation of business , a senior minister said on Saturday.

Multiple petitions have been filed in the Supreme Court this week by Opposition parties, civil society groups and labour unions against a proposed controversial legislation on the Colombo Port City, alleging that the USD 1.4 billion project violated the country’s sovereignty, the Constitution and labour rights.
The bill titled the Colombo Port City Economic Commission was gazetted on March 23 and the ruling Rajapaksa administration tabled it in Parliament last week. The bill aims to provide for a special economic zone to establish a commission to grant registrations, licenses, authorisations and other approvals to operate business in such economic zones.
The Opposition parties have mounted against the proposed bill and some of government allies have also raised concerns over it. There have been many petitions filed against it in the Supreme Court, questioning its constitutionality.
A 5-member bench of the apex court will hear the petitions next week.
Defending the project, touted by the government as an investment hub for foreign capital, Minister of Capital Markets Ajith Cabraal said Sri Lanka had dropped in the ease of doing business index in the past few years. In South Asia, Sri Lanka is the fourth. Do you really want to go through the hassle of getting approvals? This will be a one stop shop, he said.
The petitioners have asked the Supreme Court to rule that the bill must be passed by a two-thirds majority in Parliament and by a referendum if it is to become law.
The petitions said that the Port City Commission to be established will be empowered under the Act to the detriment of the territorial integrity and sovereignty of Sri Lanka.
Cabraal said the government would change the laws if required by the Supreme Court.
Responding to accusations that it would end up being a centre for money laundering, Cabraal said Colombo Port City has not been exempted from money laundering laws.
It had been exempted from Sri Lanka’s contract law for faster resolution of commercial disputes. All other local laws will continue to apply, he said.
The Chinese company, China Harbour Engineering Corporation, which reclaimed the sea to build the city was keen that non-Chinese foreign investors also arrive.
“They want investors from all countries to come, Cabraal said.
He said the directorate of the Colombo Port City Commission would be appointed by President Gotabaya Rajapaksa and not by the Chinese.
They would serve at the pleasure of the President and could be removed by the President, Cabraal said.

The Colombo Port City project, expected to play a key role in China’s ambitious ‘Maritime Silk Road’ project in India’s backyard, is said to be the single largest private sector development ever in the island.
Sri Lanka, in recent years carried out various development projects with an estimated USD eight billion loans.
The huge Chinese loans sparked concerns globally after Sri Lanka handed over the Hambantota port to China in 2017 as debt swap amounting to USD 1.2 billion for a 99 years’ lease. (PTI)