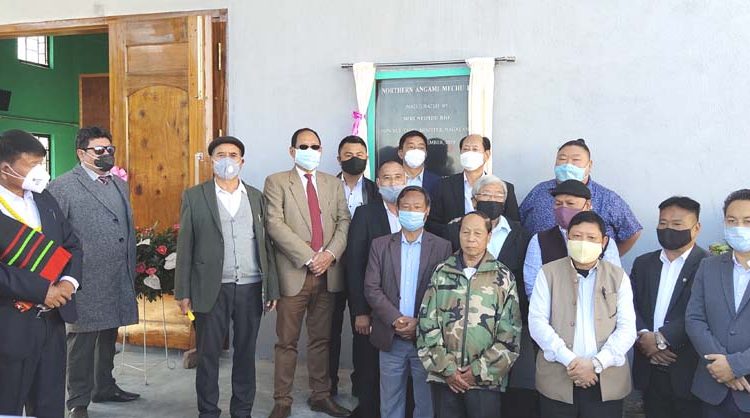 The five projects are inauguration of Northern Angami Mechü Ki (Community Hall), flagging off the Mobile Skill Morung and Multi Skilled training under Skills Acquisition and Knowledge Awareness for Livelihood Promotion (SANKALP) by Rio, inauguration of Sub-divisional Industries Center by Advisor Industries & Commerce, Labour & Employment, Skill Development & Entrepreneurship Imnatiba, recognition of Chiephobozou Town Council by Advisor for Urban Development and Municipal Affairs Dr Neikiesalie Kire, and Sub-Divisional Office of Soil & Water Conservation Department by Minister for V Kashiho Sangtam.
In his speech at Northern Angami Community Hall, Rio expressed hope that the Community Hall would be a House of blessing to strengthen the unity and oneness of the North Angami villages.
Maintaining that the State capital being in the Angami territory has been a blessing, he said Kohima town has been witnessing rapid expansion and is touching all the regions.
He said with the formal recognition of Chiephobozou Town Council, people of the area should willfully pay house tax so that they will have the right to demand for service.
Maintaining that the Northern Angami has a young and fertile land, the Chief Minister stressing on economic self-sufficiency asked the people to focus on organic farming of agriculture and horticulture produce through modern agricultural technologies.
He also asserted that the State government has initiated various developmental activities, including the Chiethu and National Highway projects as well as economic uplift through skill development and entrepreneurship.
In this, he urged upon the landowners and villages to extend full cooperation to the State government to carry forward developmental activities without disturbance.
The Naga movement started by Naga National Council (NNC) was not a failure, Rio said adding, it may not have been 100 percent to the expectation of the people but was a success, because the Government of India recognized the Naga history, tradition and culture as ‘unique’.
It also accepted that the ‘Naga issue is not a law and order problem but a political problem and therefore political talks are being held to resolve the issue’, he said.
He also said that the 16-Point Agreement had brought about statehood to Nagaland but it needs to be upgraded for which talks are in progress to increase the number of seats of the State in Parliament, Assembly seats, having an Upper House and Pan-Naga Hoho.
On the issue of integration of Nagas, he said the Central government has said that it cannot be imposed but would be done through democratic process.
Further, the Chief Minister also informed that the state government would go ahead with implementation of the delimitation exercise so that justice would be delivered to the electorates for equal representation in the State Assembly.
Meanwhile, the Chief Minister lauded the different departments for initiating the projects in the constituency for the welfare of the people.
Lone Lok Sabha MP, Tokheho Yepthomi in his speech was all praises for Rio saying that in 57 years of statehood Nagaland has had 9 Chief Ministers, all of whom worked well for Naga people but Rio is an exceptional CM. He has faced lots of critical moments but yet strived through it all, said Yepthomi.
He lauded the constituency people for election Rio as their representative for 7 consecutive times.
Minister for Higher & Technical Education and Tribal Affairs Temjen Imna Along said the building is a sign of sincere efforts of the elected leaders of their commitment towards the people.
He thanked Northern Angami-II constituency for sending Rio, who is an experienced, versatile and humble leader committed to serve the people.

Along asserted that the PDA alliance is strong on all fronts and will continue to work for the welfare of the people and also facilitate the Naga political issue.
Maintaining that even the Government of India trusts Rio to prepare the ground for a political solution to the decades old Naga political issue, he said “we are looking to a bright and prosperous future without compromising the identity and uniqueness of the Naga people, which can only be achieved under Rio’s leadership”.
Appreciating the gifts extended by the villagers in the form of organic vegetables and fruits to the dignitaries, Along called upon the villagers to be self-sufficient by promoting the organic produce.