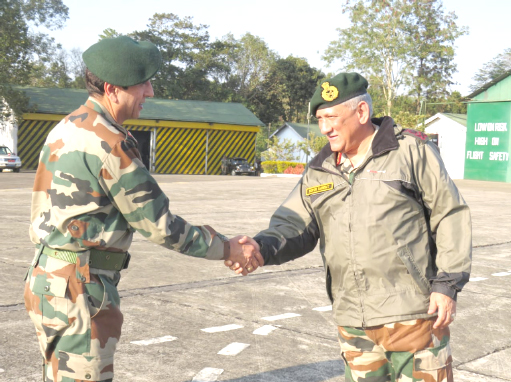 Dimapur, February 2: Chief of the Army Staff, General Bipin Rawat arrived on a 2-day visit at Rangapahar Military Station today to review operational preparedness of Army Formations in the region. The Army Chief was received by Lieutenant General MM Naravane, General Officer Commanding-in-Chief Eastern Command. On his arrival, he was briefed by Lieutenant General Rajeev Sirohi, General Officer Commanding Spear Corps.
The Spear Corps, besides undertaking extensive Counter Insurgency operations in North Eastern states is also responsible for operations along the Line of Actual Control (LAC) in Arunachal Pradesh.
The Army Chief expressed satisfaction with the operational preparedness along the LAC and appreciated the conduct of people friendly Counter Insurgency operations by the Spear Corps. He complimented the troops for ensuring peace and tranquility in the region by their dedicated hard work in difficult terrain and operational conditions.
He interacted with the officers and troops of Spear Corps and asked them to work tirelessly and in a professional manner to accomplish their task. Later, during the visit the Army Chief is scheduled to visit Kohima and Itanagar. (Page News Service)

Don’t allow the spark of youth to be extinguished: Rosemary Dzüvichü

PDA has failed to do justice in development activities: Azheto Zhimomi