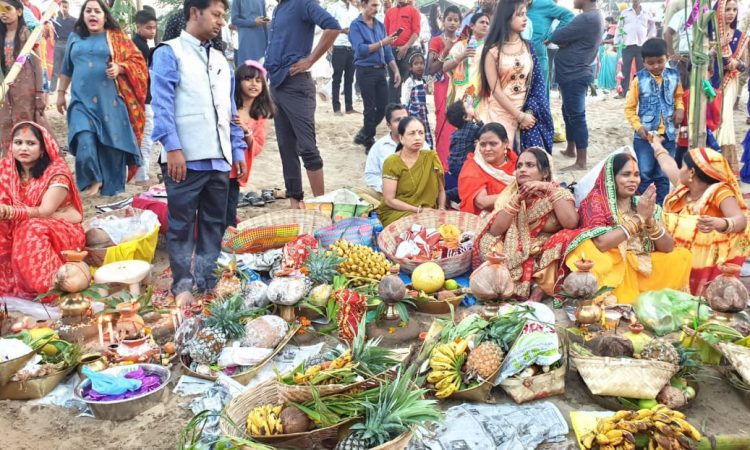 DIMAPUR, November 2: The premier festival of north India, Chhhath Puja was celebrated with religious fervor in Dimapur, which saw the participation of thousands of people from Bihar, Jharkhand, eastern Uttar Pradesh and other parts of north India. Bengali, Nepalis and people from other Hindu community also celebrated the festival and observed fast.
The devotees thronged the banks of Dhansiri River and elsewhere water sources and paid obeisance to the setting Sun on Saturday evening.
Chhath festival is celebrated as a thanksgiving to the Sun God for giving the bounties of life on earth and for fulfillment of wishes of believers. It is a festival of reverence to the solar deity, the only festival in the world where devotees offer salutations to the setting sun and then again ends with offering prayers to the rising Sun the following morning.
On Saturday, thousands of devotees reached the river bank clad in beautiful clothes, carrying basket full of fruits, sweets and preparations made of whole wheat and prayed to the Sun God till sunset.
Nagaland Bhojpuri Samaj (NBS) had made elaborate arrangements at the banks of Dhansiri River near Urra village for the Chhath devotees. The members of the NBS had cleared the river banks for the last four days and made Ghats where the devotees would sit and pray and pay obeisance to the sun god.
The NBS also made it sure that no untoward incident took place and sought the help of SDRF which had stationed its team at the venue. The SDRF team with a boat moved around the river and cautioned people not to venture in the river water. Medical facilities and adequate security was also provided to the devotees. The NBS also ensured that the Chhath festival is celebrated without the use of fire crackers and on Saturday, they banned the use of the same at the venue.
Meanwhile, on Saturday, after paying obeisance to the setting sun, the devotees returned to their respective home to make preparation for the next day. Some devotees performed another ritual in their respective homes Saturday evening. Women prepared a canopy of sugar-cane and lit earthen lamps underneath and sang hymns in praise of Sun God and Chhathi Devi, maintaining strict fast.
Women fast continuously for 3 days and break their fast on the 3rd day after offering prayers to the rising sun.
The festival will end early Sunday morning when devotees would go back to the river banks and welcome the sun with folded hands. They offer ‘Arghya’ and chant mantras and hymns from the Rig Veda and commence the puja. The devotees break the fast after the Sun rises.
Chhath is the festival of truth, non-violence, forgiveness and compassion. Chhath is the only time when the setting sun as apposed to its rising is celebrated for its glory as the cycle of birth starts with death. (Page News Service)