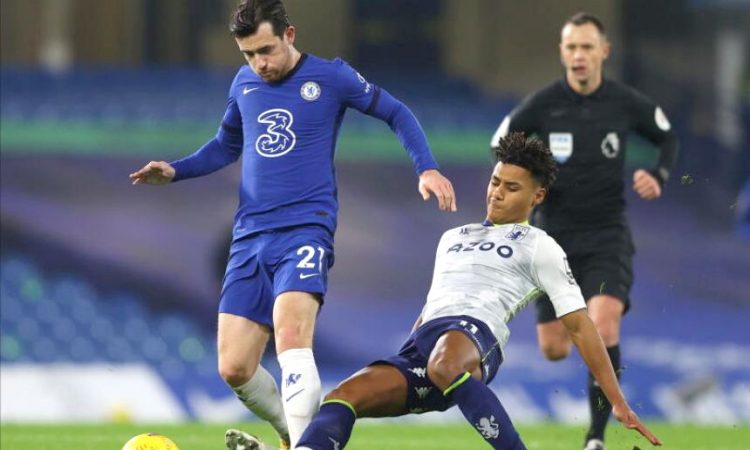 Ben Chilwell (left) of Chelsea in action against Ollie Watkins of Aston Villa on Dec 28, 2020.

LONDON, December 30: Chelsea, overhauled by coach Frank Lampard after a weekend loss to Arsenal, drew 1-1 at home to Aston Villa on Monday as Oliver Giroud’s first-half header was cancelled out shortly after the break by Anwar El Ghazi.
Lampard made six changes to the team that began Saturday’s 3-1 defeat to their London neighbours and his gamble on Giroud paid off when the France striker stooped to head in a cross by Ben Chilwell in the 34th minute.
It was Giroud’s third goal in four league starts this season, a contrast to a poor run for Timo Werner who has failed to score in the league since Nov. 7. The German, signed from RB Leipzig in the summer, appeared only as a substitute on Monday.
Villa drew level in the 50th minute when El Ghazi sidefooted a volley at the far post through the legs of Chelsea goalkeeper Edouard Mendy after a cross by Matty Cash.
Chelsea protested in vain that their defender Andreas Christensen had been fouled in the build-up by Jack Grealish.
The result means Villa and Chelsea sit in fifth and sixth place in the table respectively ahead of Tuesday’s matches.
Everton want answers after Manchester City game postponed due to COVID
Everton are seeking “full disclosure” regarding the COVID-19 outbreak at Manchester City which resulted in their Premier League game being postponed on Monday.
Just hours before the game was due to kick off at Goodison Park, City said they had returned a number of positive tests in addition to the four on Dec. 25 that included striker Gabriel Jesus and defender Kyle Walker.
The Premier League decided to postpone the game, which had been set to be played in front of 2,000 fans.
“Whilst Everton will always have public safety uppermost, we will be requesting full disclosure of all the information that Manchester City provided to the Premier League so the club can be clear on why this decision was taken,” Everton said in a statement on their website.
Premier League rules state that a game cannot be postponed unless a team has fewer than 14 players available.
City are scheduled to visit Chelsea on Jan. 3 and meet local rivals Manchester United in the League Cup semi-final on Jan. 6.
Monday’s game was the second to be moved this season after an outbreak at Newcastle United prompted the league to call off their match at Aston Villa earlier this month.
Arsenal have said defender Gabriel Magalhaes, who was self-isolating after coming into contact with an individual who tested positive for COVID-19, has also returned a positive test.
EPL: Leicester move up to second after 1-1 draw at Palace

Leicester City moved up to second in the Premier League after a 1-1 draw at Crystal Palace when Harvey Barnes cancelled a Wilfried Zaha goal at Selhurst Park on Monday.
Leicester will remain second overnight with Everton, level on points with them, not playing later on Monday after their home match against Manchester City was postponed following more positive COVID-19 cases at City.
Leicester dominated the bulk of the game but failed to take their chances and missed a first half penalty while striker Jamie Vardy only came on as a second half substitute.
“We’re disappointed not to get three points and we weren’t as clinical as we have been, but it’s onto the next game,” Barnes told Amazon Prime.
“It has been a very busy schedule with some great results so we’re happy with where we are in the table.”

Leicester could have taken an early lead after Luke Thomas was fouled in the box by James Tomkins but Kelechi Iheanacho’s weak effort from the spot after a stuttering run-up was swatted away by goalkeeper Vicente Guaita.
“Guaita is a good keeper, he’s been brilliant ever since he came here and he saved me today. Hopefully I can repay him one day,” a relieved Tomkins said.
Palace made it 1-0 just before the hour mark when Andros Townsend floated a cross to the far post for Zaha to volley home from an acute angle.
However, Barnes equalised when he scored his second goal in as many games, driving a low effort from the edge of the box past the outstretched arm of Guaita in the 83rd minute.
Palace’s winless run in the league has now extended to five games but Zaha was glad to take a point.
“We’ll take a point today, the last few games have been hard on us,” Zaha said after scoring his eighth league goal this season.
“The way we worked today I’m definitely happy and we’ll take that going into the new year.” (Reuters)