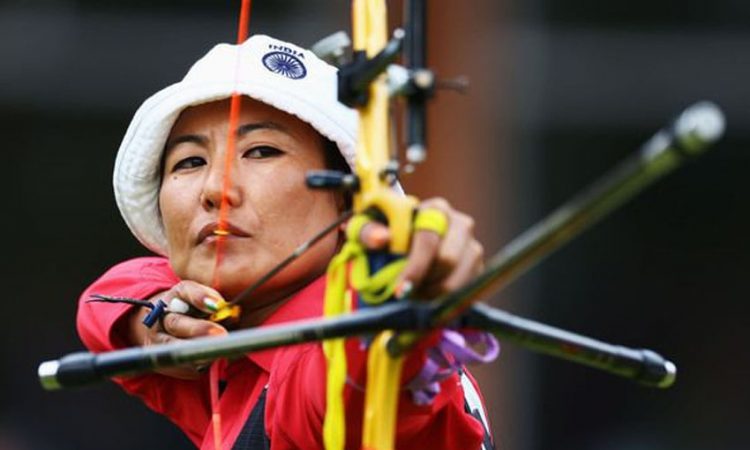 Temjenrenba Anichar
DIMAPUR, JULY 25: Sometime in the autumn of 2012, students of an all-women college at Dimapur had sprung a surprise: inside the college compound, they all broke into a spontaneous rupture of loud applause and piercing whistles. It lasted for nearly a minute.
The teachers, even more surprisingly, didn’t seem to mind one bit the boisterous conduct of the girls clad in pink and white salwar kameez. That too, in front of guests and journalists they had invited for the occasion.

It was the year of London Olympics ~ an edition of the Games that has now come to be associated with some kind of numbing heartache for Indian archery. The cheering and whistles of the college students that day was directed at one of the members of that archery team.
And, almost 10 years on, she still remembers it ~ at least, the part worth remembering.
“Bishe kushi paishe”, the object of that adoration, Chekrovolu Swuro, told Nagaland Page recently when reminded of that autumn morning among college girls.
“I was not expecting any of that, even the invitation from the college. When I first got the call (from the college), I was confused a little because I didn’t know what to say to them. But I decided to go anyway and say a word or two to the girls. Now I cannot even remember what I said that day”, she said, in amusement.
But that reaction from the girls, when she was called to take her seat on the stage, was unforgettable to the then 30-year-old archer who had just become only the second athlete from Nagaland to earn the Olympian tag. And, the first and only woman from the State. Some legacy.
“It was quite humbling”, added Chekrovolu, also known for her reserved and introverted nature.

Perennial soundtrack
Since her teenage days, the unmistakable soundtrack of her life has been the gentle twang of letting loose the bowstring, accompanied by the distant pop of arrows hitting the target. Per Olympic standard, the arrows are shot from a distance of 70 metres, at a target whose centre is roughly the size of a CD.
How did she start? It’s a story Chekrovolu has told many times over.
One of her elder sisters, Vesuzolu Swuro, was already a national-level archer when the teenaged Chekrovolu would hear of her sister’s exploits finding space in the sports pages of the local newspaper.
“I also wanted to have my name written in the newspapers”, she said, like she had said many times before.
In 1994, the elder sister, who was in Nagaland Police, told her to come to the NAPTC, Chumukedima, to pursue her archery dream. She left Dzulha village with a friend.
“But after reaching the NAPTC ground, my friend returned saying that she can’t practice archery”, said Chekrovolu. One day at the ground, she was crying because her hand hurt from the practice.
“A part of my hand had turned dark, and it was hurting. But my sister scolded me, saying I should be able to bear such minor pains if I were to achieve anything in life. So, I stopped crying and that’s how it started”, she shared.

Her first participation in competition target shooting was at the 1994 National Games, in sub-junior category. The first medals she won were at the 1996 NE Games held at Gangtok, Sikkim. “I won all 4 gold medals”, she shared.
More arrows in the quiver
However, it wasn’t until she joined the Tata Archery Academy (TAA) at Jamshedpur in 1999 that Chekrovolu started adding more arrows to her quiver. “I still feel that if I had stayed in Nagaland, I would not have achieved whatever I have been able to accomplish today”, she said.
In 1999, her elder sister told her to come to Kolkata where she was staying then. “Someone from Guwahati came to pick me up at Dimapur Railway Station. Then I took a train ride alone to Kolkata, where my sister picked me up at the station. I was so happy, thinking I’d be staying with her. She took me to her hostel, gave me food and in the evening, sat me on a train. So I asked her where she was sending me”, said Chekrovolu.
“Jamshedpur, Tatanagar” came the reply.
“I was told to get off the train after four hours. She told me that there will be a huge signboard with Tatanagar written on it. There a tall man from my sister’s batch picked me up and took me to the Academy hostel on his bike. I could not speak a word because I didn’t know Hindi or English. I was only 15”, she shared.

Despite getting selected to the Academy within three days of her arrival, the language barrier meant that Chekrovolu did not speak to anybody for 2 months. “Slowly, I learnt to communicate. My Coaches were very caring. I was the first from Tata Archery Academy to bring an international medal”, she said.
Back then the Chief Coach was Sanjeev Singh and Dharmendra Tiwary was the Basics Coach. Now, both are recipients of Dronacharya Award. And their pupil from Nagaland, an Arjuna Award winner.
While at the Academy, she initially represented Bihar. But after it was accorded statehood, Chekrovolu played for Jharkhand at the national-level.
Her international debut was at the Asian Archery Circuit Meet in 1999, held at Bangkok, Thailand. She took the silver, after missing gold by a single point.
In 2003, at the World Archery Championship at New York, both the Indian men and women team qualified for the Olympics, a first time in its history. She recalled this as one of her most memorable moments.
“That feeling of having done something for the country”, she recalled.

“But maybe because I did not practice enough, I did not get through in the selection trials for the Olympics. Also in 2007, we qualified for the 2008 Olympics but I did not get through the selection. After that I gave up on Olympics. But in 2011, I went to the selection trials for the 2012 Olympics thinking I will give support to my brother. By God’s grace I came out on top and qualified”, said the 39-year-old-archer.
‘Thy will be done’
A day before the 2011 Olympics selection trials at Kolkata, her father, Vepoyi Swuro, had suffered a stroke. “My elder sister, my younger brother and I were praying at a corner of the ground. We prayed that if it is His will to take him, we cannot help it but we asked Him to give us a few more days. We were crying. My elder sister took a flight from Kolkata the next day but my brother and I stayed back since the trials were the next day”, she shared.
The Olympics took its natural backseat to family misfortune. Even to this day, she doesn’t remember how the trials went. “I just pulled the string and released it. I went through the motions. It was all God’s grace that I qualified”, said the archer.
After the trials, the Coaches gave her 3 days’ leave to visit the ailing father. Seven years later, the father passed away, aged 101.
“It was my father who pushed me towards archery. My mother did not want me to pursue sport but my father decided that I should be with my elder sister in order to learn archery”, she added.

The Olympian, now mother to a 5-year-old son, repeated something she had said in one of her earlier interviews. “Those of us who come from struggling families have the hunger to achieve, no matter what. But these days, everyone wants the easy choice. Of course, there are some who work really hard but the majority search for the easy option.”
She should know. She is the youngest girl among 10 children. “There are only 10 of us”, as she put.
Current routine
Though not retired officially, the only living Olympian from Nagaland has stopped attending National Camps. Again, family takes precedence ~ “I have a 5-year-old son now. The other day, he asked for his bow; so we made him one from bamboo”.
She, however, practices daily at the NAPTC training ground. Every morning and evening, except on Sundays, about a dozen of archers line up at the ground to either do shooting practice or physical exercises.
“There are three sessions in a day. We do physical exercise from 5:30 a.m. to 8 a.m.; shooting practice from 8:30 a.m. to 11 a.m.; and then another shooting session from 2:30 p.m. to 5 or 5:30 p.m.”, she said.
The practice sessions are for the All India Police Meet. “It was supposed to be held in July this year but because of the pandemic, it was postponed. By God’s grace, we don’t return empty-handed from the Police Meets”, she added.
Even as the shadows begin to lengthen on a path-breaking career, the archer has no designs to unstring the bow yet.
“If everything goes according to plan, I am not leaving archery till I am 60 years old”, said Chekrovolu, “even if I don’t hit the target. There is something about holding a bow and releasing the arrow.”

There was a lamentation about the drought of Olympians from Nagaland since her trip to London in 2012. But that is another story for another day.
This is a celebration of an Olympian, of the kind we will never see again. The first Naga woman Olympian.