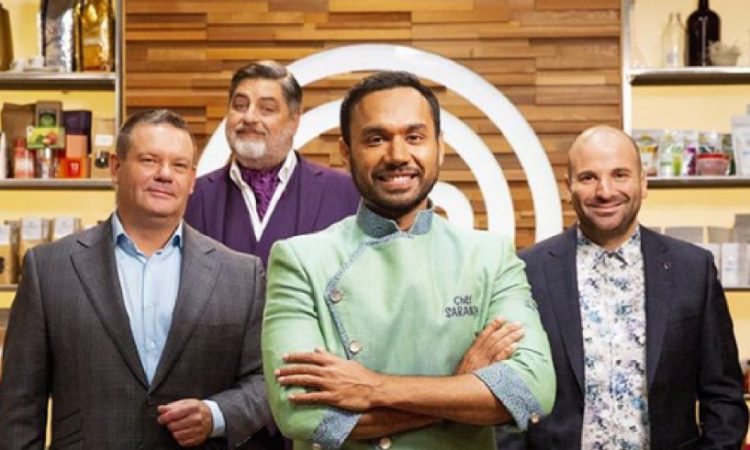 For all those who have been glued to their Television sets to watch MasterChef Australia season after season, here comes a good news!
An elimination challenge in one of the world’s most influential cookery shows has now got an Indian chef as a judge.
Interestingly, the one dish that has taken the chef all the way to the influential TV show is Butter Chicken. Yes, that’s right!
Chef Saransh Goila took his popular Butter Chicken recipe to the contestants of MasterChef Australia as part of an elimination challenge.
A known face amongst the Indian audience and the mastermind behind Goila Butter Chicken that runs out of three places in Mumbai, Chef Saransh talked about the how it was to cook the special dish for the show and judge the dish’s version prepared by the contestants.
As quoted by GQ, the young chef said, “The guys behind the show tried out my recipe four times before finalising it. I was there a week prior to the episode making and re-making the dish for them. We didn’t go fancy while plating the butter chicken, so it was still presented in a way that is eaten with hand. Everyone was surprised to know that it’s not simply a dish put together using tomatoes, cream and butter, and that my version uses a lot more techniques and ingredients.”
“The contestants got two-and-a-half-hours to replicate the dish. One contestant was grilling her chicken but forgot about it, and the grill actually caught fire. It had to be taken outside the set. They also had to think on their feet and figure things like how the onions had to be pickled and the dough fermented,” he added.
So is the pressure as real as one gets to watch on TV?
“Yes it is! The contestants also had to make roomali roti. Out here, you feel anybody can make it. But there, it was a major pressure point,” said the chef.
And what is it about Goila Butter Chicken that makes it so special? What are the secret ingredients?
“I happened to make this accidentally, in a way to actually give something that tastes like butter chicken but does not have chicken, for my vegetarian parents. I introduce smoke directly into the gravy, don’t use any sugar, add kasuri methi, and tweak the Tomato:Dairy ratio, so that the flavours are intense and complex without the dish being overly rich and unhealthy. The paneer in the substitute version then becomes secondary, and the gravy comes first,” Saransh said.
He also said that his friends in Mumbai first ate the yummy chicken when he moved to Mumbai, and they loved it so much that they started a Twitter hashtag: #GoilaButterChicken. This then became his signature dish which he then started serving through his outlets and pop-ups.
Saransh Goila was seen as a judge on MasterChef Australia episode 41, along with other judges Matt Preston, George Colombaris and Gary Mehigan.
The above episode of MasterChef Australia will be screened in India in September.
Till then, you can visit Saransh’s outposts in Versova and Bandra, and at Flea Bazaar Café in Lower Parel, Mumbai and have finger licking good Goila Butter Chicken!