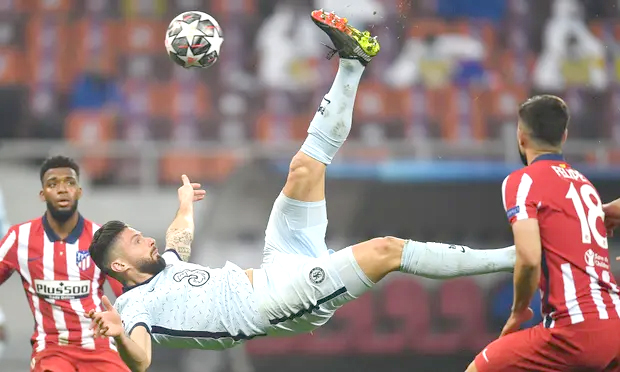 Giroud’s acrobatic strike was initially ruled out for offside but stood after VAR showed Mario Hermoso had got the final touch, delivering a huge blow to Atletico’s hopes of reaching the quarter-finals.
“I didn’t know what to think about the goal, I just focused on hitting the ball,” said Giroud. “I love an overhead kick and I was just pleased to see the ball hit the back of the net. I had no clue about being offside or not.”
Diego Simeone’s side had put on a typically disciplined defensive performance until that point but Giroud’s moment of genius means they will have to score in London on March 17 if they are to avoid an early exit.
It also continues a worrying dip for Atletico, whose lead in La Liga is also under threat after one win in four matches.
“If you’d said to me in September we’d lose this first leg 1-0 and be top of the league, I’d have signed for that for sure,” said Simeone.
“The results aren’t going for us so we have to work, work, work and work.”
Chelsea, meanwhile, passed their biggest test since Tuchel was appointed at the end of January, backing up a strong run against lesser lights in the Premier League with a polished display against one of Europe’s elite.
“We knew their strengths and dealt with them,” said Giroud. “We need to stay focused now and finish the job.”
Giroud’s goal in the 68th minute was only the third Atletico have conceded in 14 home legs of the Champions League knockout stages under Simeone, even if this fixture was at home only in name.
Restrictions imposed by the Spanish government meant the game had to be played in Bucharest instead of Madrid, despite the return match remaining at Stamford Bridge in three weeks’ time.
Tuchel admitted the switch gave his side an advantage but Simeone refused to complain on Monday, insisting he felt fortunate to play during the pandemic, “however and wherever that might be”.
Their defeat makes it three home losses out of three for Spain’s teams in the Champions League last 16 so far, after Barcelona were thrashed by Paris Saint-Germain and Sevilla were beaten by Borussia Dortmund last week.
Callum Hudson-Odoi started for Chelsea, despite Tuchel criticising the 20-year-old’s attitude against Southampton on Saturday.
Atletico started with Suarez, Joao Felix and Angel Correa but an attacking line-up took up a typically defensive shape, a six-man wall quickly forming in front of Chelsea in the opening stages.
The first half was tight, each side able only to create openings but failing to find the pass to make a chance.
Edouard Mendy’s heavy touch in the opening minutes almost gave the chasing Saul Niguez a tap-in while Timo Werner’s angled shot was saved by Jan Oblak and Suarez miskicked at the near post.
Chelsea looked most dangerous down the flanks, where Marcos Alonso and Hudson-Odoi pushed Atletico back. Atletico had space on the break but lacked the precision to capitalise.
Felix sprung into life early in the second half, feeding Thomas Lemar and then meeting the Frenchman’s cross with an acrobatic volley that flew over.
The game looked destined to finish goalless only for Atletico to briefly lose shape, allowing the instinctive Giroud to take advantage.
Alonso had raced away from Marcos Llorente down the left and his cross was diverted backwards to Giroud, who brilliantly bicycle-kicked into the corner, but looked offside, only for the replay to show it was Atletico’s Hermoso who had given him the assist.
The goal stood and Chelsea’s players celebrated, seemingly as surprised as anyone and delighted with a precious advantage.
Champions League: Jamal Musiala shines as Bayern Munich rout Lazio

Holders Bayern Munich brushed off their recent poor domestic form to throw down a Champions League marker with an emphatic 4-1 win at Lazio in Tuesday’s first leg of the last-16 stage.
Robert Lewandowski gave Bayern an early lead before 17-year-old Jamal Musiala scored his first Champions League goal on only his fourth appearance in Europe.
Musiala, who turns 18 on Friday, is now the youngest English goal-scorer in Champions League history.
A Leroy Sane strike gave Bayern a three-goal half-time cushion at the Stadio Olimpico before Francesco Acerbi scored an own goal just after the break.
Joaquin Correa pulled a goal back early in the second half to give the scoreline some respectability for Lazio.

“We were aggressive from the start and went full throttle,” Bayern midfielder Leon Goretzka told Sky on his first appearance after testing positive for Covid-19.
“I am happy to have played in such an awesome game after a difficult few weeks.
“That was important after we had often been caught napping (in recent games). Things worked well, that was a first good step.”
Simone Inzaghi’s Lazio need a near miracle in the return game in Munich on March 17 to reach the quarter-finals.
“We wanted to show we were switched on from the first minute, we took our chances and played well,” said Bayern winger Sane.
“We used the ball well and put pressure on them at the back.”
Bayern coach Hansi Flick pulled a surprise by starting Musiala in place of Thomas Mueller, who was sidelined after testing positive for Covid-19.
Benjamin Pavard was also out with coronavirus, while midfielders Corentin Tolisso and Serge Gnabry were both missing with thigh injuries.
Despite dropping five points in the Bundesliga last week and bringing a depleted squad to Rome, Bayern needed less than nine minutes before Lewandowski pounced on a mistake in the Lazio defence.
The Poland star snapped up a weak back-pass by Mateo Musacchio — who was subbed off soon after — to dribble around Lazio’s veteran goalkeeper Pepe Reina and fire into an empty net.
It was Lewandowski’s 72nd Champions League goal, taking him solo third on the all-time list ahead of Real Madrid great Raul.
England Under-21 midfielder Musiala, who has reportedly opted to play for Germany’s senior side, then showed maturity beyond his years to calmy drill past Reina to make it 2-0 on 24 minutes.
The lead was extended just before half-time when Kingsley Coman’s shot was parried and Sane tapped in the rebound.
There were two goals in the space of three minutes just after the break, with Acerbi turning the ball into his own net as Bayern counter-attacked from a Lazio corner.
Lazio were in danger of matching their heaviest home defeat in Europe having lost 4-0 to Chelsea in the 2003/04 group stage.
But Bayern’s defence has often crumbled in recent weeks and Lazio forward Joaquin Correa took advantage of poor marking to fire past Manuel Neuer in the 49th minute.
Bayern are now unbeaten in their last 18 Champions League games, with only a 1-1 group stage draw at Atletico Madrid last December denying them a perfect record of wins. (AFP)