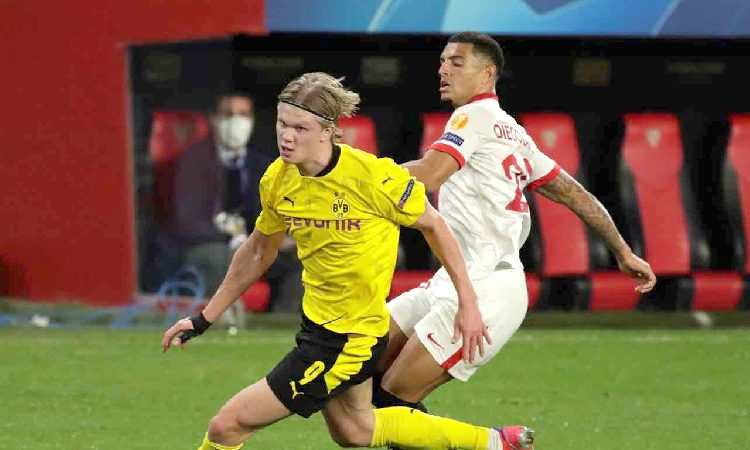 SEVILLE, February 18: Erling Braut Haaland produced another deadly display of finishing with a first-half brace as Borussia Dortmund came from behind to beat Sevilla 3-2 in Spain in the first leg of their Champions League last-16 tie on Wednesday.

Suso’s deflected strike gave last season’s Europa League winners an early lead behind closed doors at the Ramon Sanchez Pizjuan stadium, but Mahmoud Dahoud soon equalised before Haaland took over.
The Norwegian phenomenon put Dortmund in front in the 27th minute and then scored again two minutes before half-time, the goals taking him to 25 in 24 appearances this season in all competitions, and 18 in just 13 Champions League appearances since the start of last season.
Substitute Luuk de Jong’s late reply gave Sevilla cause for hope heading into the return leg on March 9, but Dortmund remain favourites to progress to the quarter-finals.
Haaland, who also set up Dahoud’s equaliser, produced a performance, in the first half at least, which showcased his remarkable strength, hold-up play and pace as well as his brilliant finishing.
It was too much for a Sevilla side who had come into this tie with high hopes, having only been beaten by La Liga leaders Atletico Madrid, away, in their previous 19 outings.
Julen Lopetegui’s team had won their previous nine matches on the bounce and had kept seven straight clean sheets before the arrival of Dortmund and Haaland.
Sevilla have won the Europa League or its predecessor, the UEFA Cup, an incredible six times since 2005, but only once have they got past the last 16 of the Champions League, when they beat Manchester United in 2018 before losing to Bayern Munich in the quarter-finals.
The quality of Haaland was the difference here as Dortmund, having sunk to sixth in the Bundesliga on a poor run of form, came to life on their return to the Champions League.
Yet the evening started well for Sevilla, with Suso opening the scoring in the seventh minute, his shot deflecting in off Mats Hummels.
Dortmund drew level in the 19th minute as Haaland showed terrific strength to hold the ball up on the right before coming infield and feeding Dahoud, who worked his way into position to fire a superb shot high into net from just outside the area.
It was the first goal Sevilla had conceded in more than 12 hours of football.
Eight minutes later they conceded again.
Haaland dropped deep, collecting possession near the halfway line, and then turned and charged towards goal, playing a pass to Jadon Sancho on the edge of the box and then continuing on to place the return ball past goalkeeper Yassine Bounou.
He struck again two minutes before half-time, slotting home first-time after Marco Reus had stolen the ball from the feet of Alejandro ‘Papu’ Gomez before bearing down on goal.
However, Sevilla did dominate the second half as Dortmund sat back, and the hosts got a potentially crucial second goal six minutes from the end.
Oscar Rodriguez’s high, hanging free-kick was turned into the net by De Jong, giving them something to cling to.
Porto edge Cristiano Ronaldo’s lacklustre Juventus in Champions League

Cristiano Ronaldo’s first game for Juventus in his native Portugal ended in 2-1 defeat as FC Porto out-played the Italians for much of Wednesday’s Champions League last-16, first leg tie.
Iranian striker Mehdi Taremi put the hosts ahead after just a minute at Estadio do Dragao following a Rodrigo Bentacur defending error.
And Mali striker Moussa Marega added a second straight right after the break.
But Federico Chiesa pulled a goal back with eight minutes to go to keep Juventus afloat with the second leg in Turin on March 9.
It was a lacklustre performance from the Italian giants, chasing their third Champions League title and first in 25 years.
Record Champions League goal scorer Ronaldo, 36, drew a blank against a side captained by his Portuguese international and former Real Madrid teammate Pepe, as the visitors struggled to recover from their early blunder.
Wojciech Szczesny had sent the ball out to Bentancur, who passed back to the Polish goalkeeper despite Taremi being just on front of goal.
The Iranian quickly pounced to prod past Szczesny for his first Champions League goal.
Porto pressed forward with Juventus almost conceding a second on 23 minutes as Szczesny cleared straight to Sergio Oliveira whose shot was deflected away from goal.
To add to Andrea Pirlo’s woes captain Giorgio Chiellini limped off 10 minutes later with defender Merih Demiral coming off the bench.
Pirlo had juggled Juve’s defence with Leonardo Bonucci out injured with Alex Sandro returning, playing alongside veteran Chiellini, Matthijs de Ligt and Danilo.
Juve had to wait until four minutes before the break for their first shot on goal with an Adrien Rabiot overhead kick cleared by Porto ‘keeper Agustin Marchesin, but the offside flag had already been raised.
The Italians suffered another terrible start to the second half with Marega picking up a Wilson Manafa cross to finish low past Szczesny.
Ronaldo had to wait until five minutes after the break to have a shot on goal. Weston McKennie nodded the ball into the path of the Portuguese star, whose weak effort was blocked.
Porto pushed for a third with Szczesny pushing out a Sergio Oliviera effort and clearing away from Jesus Corona.
However, Chiesa pulled Juventus back into the tie following a Rabiot run down the right with a pull back for the Italian to finish off into the corner of the net.
It was the first goal conceded by Porto in the competition at home this season with the former two-time winners holding on for their first win over Juventus in five meetings. (AFP)