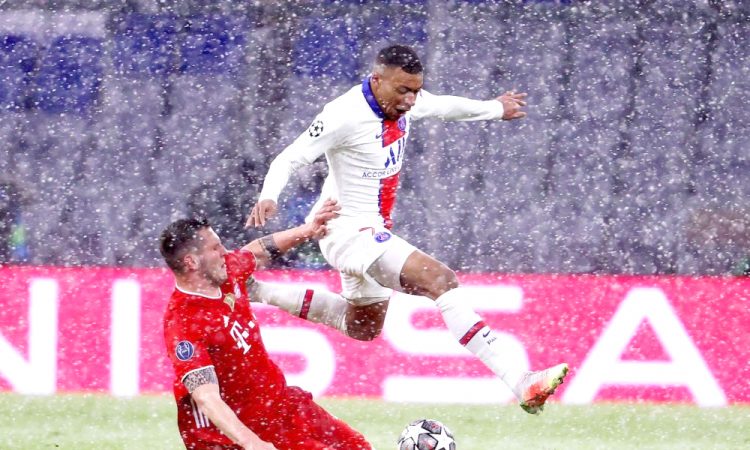 MUNICH, April 8: Kylian Mbappe insisted Paris Saint-Germain still have it all to do after he scored twice in a thrilling 3-2 win at holders Bayern Munich in Wednesday’s Champions League quarter-final first leg, in a repeat of last year’s final.

Bayern had their 19-match unbeaten run ended in the Champions League with their first European defeat since March 2019 as head coach Hansi Flick suffered his first loss in Europe.
PSG raced into a 2-0 lead after just 28 minutes behind closed doors at the Allianz Arena as Neymar created goals for Mbappe and Marquinhos.
Bayern, whose top scorer Robert Lewandowski is sidelined by a knee injury, drew level with headed goals by Eric Maxim Choupo-Moting and Thomas Mueller.
However, Mbappe showed his class with a superb second goal to give the visitors an advantage for the return leg in Paris.
“We used all our chances and had a bit of luck, but nothing has been decided,” Mbappe told Sky, with the return leg to come in Paris on Tuesday.
PSG goalkeeper Keylor Navas played a key role with a string of saves as Bayern peppered his goal with 31 shots compared to the French club’s six.
“We have to score a lot more goals,” said Mueller. “If it had ended 5-3 or 6-3 for us, no one could have complained based on the chances.”
“We scored the goals at the right times,” said PSG forward Julian Draxler.
“We had a lot of hard work to do because the way they play is dangerous – with or without Lewandowski.”
This was a record 19th appearance in the Champions League quarter-finals for Bayern, but there was little for the Bavarian giants to celebrate at the final whistle.
Covid-19 cast its shadow over both teams with Bayern winger Serge Gnabry, plus PSG pair Alessandro Florenzi and Marco Verratti quarantined after testing positive.
Heavy snow fell in the first half in Munich as the visitors put the heat on the holders.
The opening goal came after Neymar sprinted through a gaping hole in the defence and laid the ball off for Mbappe, whose shot flew into the net through Manuel Neuer’s legs.
PSG’s Germany forward Draxler had a goal disallowed with Mbappe offside in the build-up as the visitors kept up the pressure.
Bayern midfielder Leon Goretzka powered a header into the feet of Navas just before the hosts fell two goals behind.
A clearance kick only got as far as Neymar, whose ball over the top found Marquinhos unmarked in the area to stroke his shot past Neuer, shortly before the PSG captain limped off injured.
Flick responded by bringing on Alphonso Davies to provide pace on the flanks and moved David Alaba into defensive midfield.
The hosts pulled a goal back when Mueller’s cross was headed past Navas by Choupo-Moting to make it 2-1 at half-time.
Neymar and Mbappe had efforts saved off the line, while Leroy Sane went close at the other end for Bayern as both teams had their chances after the break.
Bayern then equalised when Mueller nodded in a superb Joshua Kimmich free-kick on the hour.
However, the wintry night in Munich belonged to Mbappe, who showed his class by turning Bayern defender Jerome Boateng inside and out before driving his shot past Neuer with 22 minutes left.
Bayern went down fighting as Alaba and Mueller both fired agonisingly wide in the dying stages.
Chelsea punish wasteful Porto to put one foot in Champions League semis

A classy goal from Mason Mount on Wednesday helped Chelsea to a 2-0 first-leg win over Porto, whose wasteful finishing could have scuppered their hopes of springing another Champions League upset in the quarter-finals.
Mount’s slick turn and shot in the first half would have been painful enough for Porto, who were the better side for large spells of this first leg in Seville but repeatedly lacked the precision to take advantage.
Instead, their misery was compounded by Ben Chilwell capitalising on a mistake at the back to score a late second that gave Chelsea another away goal and leaves them on the brink of the semi-finals.
They were away goals only in name given both these teams were playing in the unfamiliar Ramon Sanchez Pizjuan, where they will meet again next week, just with the home and away roles reversed.
Porto were in the home dug-out, wore their home kit, had a large club banner in the empty stand behind one goal and their anthem was the one that played out before kick-off.
And Chelsea played the part too, delivering a classic away performance of soaking up the pressure and hitting their opponents on the counter-attack, their quality in the final third proving decisive.
Real Madrid could lie in wait for the victors, after they beat Liverpool 3-1 on Tuesday.
Chelsea’s win also goes some way to easing the shock of Saturday’s 5-2 loss at home to West Brom in the Premier League, which ended Thomas Tuchel’s 14-match unbeaten start as coach.
Tuchel decided Thiago Silva’s 29 minutes before being sent off in that game were not enough to hone his sharpness, meaning Andreas Christensen was picked in the back three.
And Antonio Rudiger also returned, despite his training ground scuffle with Kepa Arrizabalaga on Sunday, which Tuchel described as a “serious situation”.
Porto were regarded as the plum draw in the last eight, despite seeing off Cristiano Ronaldo and Juventus in the last 16, their task made harder this time by the suspensions of Mehdi Taremi and top scorer Sergio Oliveira.
But they were the aggressors from the outset, with Chelsea surrendering the ball and the chances.
Porto had six shots to Chelsea’s one before half-time, with Mateus Uribe grazing the top of the net with an early volley and the excellent Otavio almost catching Edouard Mendy out with a corner before Zaidu Sanusi smashed over the rebound.
Chelsea, though, showed them what ruthlessness looked like when Jorginho fired a pass into Mount on the edge of the area inside the right channel. Mount took it on his back foot and twisted away from the sliding Zaidu, before firing a cool finish into the far corner.
Porto kept coming in the second half and kept missing too. Moussa Marega snuck in but his shot was saved by the feet of Mendy before Jesus Corona feathered Luis Diaz through but he took too long. Diaz curled wide after a good run by Wilson Manafa.

Chelsea absorbed them and then hit them with a sucker-punch, Mateo Kovacic’s ball over the top miscontrolled by Corona, allowing Chilwell to steam clear, round the goalkeeper and finish. (AFP)