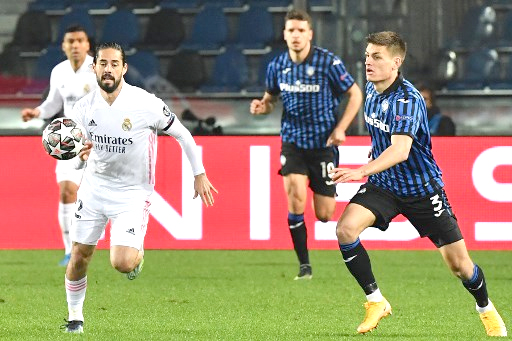 Real’s task appeared to have been made much easier after Atalanta’s Remo Freuler was sent off in the 17th minute for denying Mendy a goal-scoring opportunity.
Against the 10 men, however, Zinedine Zidane’s side, who were missing several high-profile players through injury, struggled to break down the hosts, and Real had only one shot on target in the rest of the first half.
Atalanta continued to defend doggedly after the interval, but Mendy’s superb strike in the 86th minute gave the record 13-times European champions a slender lead to take into the second leg.
Gian Piero Gasperini’s Atalanta shocked everyone by getting to the quarter-finals last year in their first season in Europe’s premier competition, especially given they played all their home games at the San Siro in Milan while their own stadium was being re-developed.
Now back at their ground, Atalanta’s first Champions League knockout match in Bergamo got off to a bad start when the referee showed no hesitation in sending Freuler off for bringing down Mendy when he was through on goal.
Without their top goalscorer Karim Benzema and forwards Eden Hazard and Rodrygo through injury, however, Real lacked potency up front.
Half chances for Luka Modric and Vinicius Jr. were all they could come up with as the game entered the latter stages.
It was going to take something special to breach the well-organised home side and full back Mendy provided it with a 25-metre strike, his first Champions League goal.
Manchester City beat Borussia Moenchengladbach 2-0 in last 16 first leg

Premier League leaders Manchester City closed in on the Champions League quarter-finals after cruising past Borussia Moenchengladbach with a comfortable 2-0 win in Wednesday’s Champions League last 16, first leg tie in Budapest.
A first half header from Bernardo Silva and a Gabriel Jesus strike in the second extended a winning streak by Pep Guardiola’s high-flying side to 19 games in all competitions.
With six changes from the side which started Sunday’s win over Arsenal City camped inside the Gladbach half for most of the game, moved to Hungary due to Germany’s Covid-19 travel restrictions.
Although clear favourites City took time to break down a stubborn German defence however, often foiled by the interceptions of Algeria left-back Ramy Bensebaini.
Debutants in the Champions League knockout stages, a nervy Gladbach had been urged by coach Marco Rose to be brave against Guardiola’s side.
Although France’s Alassane Plea was almost through on goal on 20 minutes after a rare counterattack, deep-lying Gladbach succumbed to the mounting pressure in the 29th minute.
A sublime inch-perfect cross by Portuguese defender Joao Cancelo curled over the defence from the left to reach his compatriot Silva who flicked a close-range header past Yann Sommer.

The 26-year-old Cancelo, impressive throughout, nearly doubled the lead five minutes from the break but his shot from just outside the box pinged over the bar.
Early in the second half Jesus should have converted after latching on to a poorly judged backpass by Bensebaini but saw his shot blocked by Swiss defender Nico Elvedi.
Apart from a lunging backheel from Plea that flashed just wide of Ederson’s far post on the hour mark, City comfortably contained the Germans, and went two up in the 65th minute.
Another majestic cross-field pass by Cancelo again found Silva who this time headed back across the goalmouth for Jesus to fire home and seal City’s 19th successive victory.
The loss in the Puskas Arena leaves Gladbach, who managed just one shot on target throughout the game, needing a near miracle in the return leg scheduled for March 16 in Manchester. (Reuters/AFP)