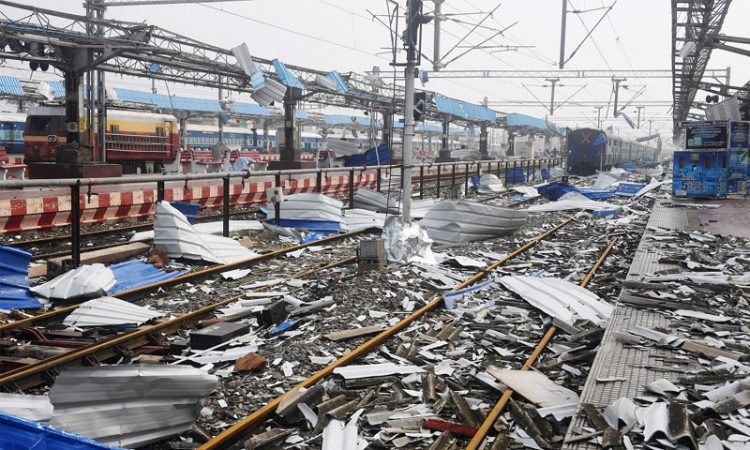 Debris litters the train tracks at the damaged railway station in Puri in the eastern state of Odisha on May 4, 2019, after Cyclone Fani swept through the area.

New Delhi, May 4: Cabinet Secretary PK Sinha on Saturday reviewed the rescue and relief measures in the Cyclone Fani affected areas of Odisha, West Bengal and Andhra Pradesh with the states and Central ministries and agencies.
Odisha has informed the Centre that there was extensive damage to telecommunications and power infrastructure in Puri, Bhubaneswar and other areas. However, advance precautionary measures and large scale evacuation helped keep the loss of human lives to minimal.
West Bengal has reported a mild impact of the cyclone while Andhra Pradesh has stated there were heavy rainfall and some damage to crops and roads in Srikakulam district.
The Cabinet Secretary has directed the Ministry of Power and Department of Telecommunications to immediately assist Odisha government by providing electrical poles, gang workmen and diesel generator sets of varying capacities for quick restoration of power supply.
The transmission line supplying power to Bhubaneswar is expected to be restored on late Saturday. The Department of Telecommunications indicated that mobile services would be restored partially late Saturday.
The Railways suffered major damages to its infrastructure, but have cleared the main lines and would start part of operations using diesel operated locomotives. Flights to Bhubaneswar would resume anytime soon.
No damage to ports and refinery installations was reported.
The National Disaster Relief Force (NDRF) has moved 16 additional teams for rescue and relief work in Odisha and has removed fallen trees and other obstacles on most of the roads
Centre reviews relief measures in  Odisha, West Bengal, Andhra Pradesh.
The Health Ministry has decided to postpone the NEET exam in Odisha scheduled for 5 May, based on the advice of the state government. The Ministry is moving teams of public health experts to assist the state government in preventing the outbreak of an epidemic.
Reviewing the relief efforts, the Cabinet Secretary directed that officers of Central ministries/agencies should remain in close touch with Odisha government and provide all required assistance expeditiously.
Enough supplies of food, medicines, drinking water and other essential supplies have been kept in readiness to be airlifted as per the requirements projected by the states. Railways and Civil Aviation Ministries have made arrangements for free transportation of relief material to the cyclone-affected areas.
The Chief Secretaries and Principal Secretaries of Andhra Pradesh, Odisha and West Bengal participated in the National Crisis Management Committee (NCMC) meeting through video conference on Saturday. Senior officers from the PMO and several Ministries including Home Affairs and Defence took part in the deliberations. (Courtesy:TS)