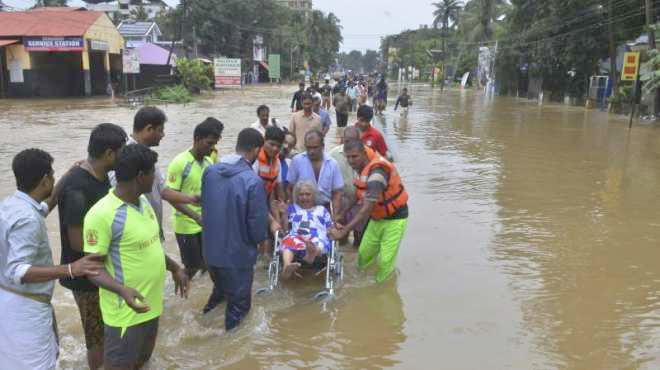 New Delhi, August 21: The Centre on Tuesday released Rs 600 crore to flood-hit Kerala and decided to waive customs duty and GST on the relief materials being imported for the affected people in the state.
The announcement came following a meeting of the National Crisis Management Committee (NCMC), which met for the sixth consecutive day.
The central assistance of Rs 500 crore as announced by Prime Minister Narendra Modi and Rs 100 crore announced by Union Home Minister Rajnath Singh for flood affected Kerala has been released to the government of Kerala on Tuesday, an official spokesperson said.
The central government has also decided to waive Customs Duty and the IGST on the relief materials being imported to aid the people in the flood-affected areas in Kerala.
The IGST refers to the Integrated Goods and Services Tax which is a part of GST under the concept of one nation one tax. It is charged on the goods and services supplied from one state to another.
The Department of Food and Public Distribution has made additional allocation of 89,540 Metric Tonne (MT) of rice as per the state government’s request.
The Department of Consumer Affairs, in addition to 100 MT of pulses supplied earlier, is sending additional quantities of green gram and Tur dal.
Public sector oil marketing companies have contributed Rs 25 crore to the Chief Minister’s Relief Fund in Kerala. The Ministry of Petroleum and Natural Gas has opened special points in the flood affected areas of the state for LPG distribution.
Permission has also been granted, in coordination with the state government, for non-certified vehicles to carry LPG cylinders. The petroleum ministry has also made available 3.2 lakh LPG cylinders and 2.2 lakh regulators.
The Railways have so far supplied 24 lakh litres of drinking water in addition to 2.7 lakh water bottles. Another 14 lakh litres water is currently available at Ernakulam. Railways has also made arrangements for supply of bed sheets and blankets.
Trains on all sections have resumed. It is also transporting relief materials from various states to Kerala free of cost.
An Action Plan has been prepared for restoration of power supply in all the affected areas. Nearly 94% of telecom towers have been made functional. Power supply to telephone exchanges is being restored on priority.
The Health Ministry will supply three crore chlorine tablets in addition to one crore tablets supplied earlier. At least 30 tonnes of bleaching powder and 1.76 lakh sanitary pads have also been sent. Additional quantities will also be sent in the next few days. No major outbreak of disease has been reported so far.
As per the the state government’s requirement, essential spices, salt, tea and coffee are also being supplied by the Ministry of Food Processing Industries.
As the rescue operations wind down, state administration has started de-requisitioning the teams of defence forces and NDRF.
The NCMC meeting was chaired by Cabinet Secretary P K Sinha and was attended by Secretaries of central ministries including Home, Health, Telecom, Consumer Affairs, Food and Public Distribution, Power, Petroleum and Natural Gas, Commerce and Textiles and Senior Officers of Defence Forces, MHA and National Disaster Management Authority (NDMA).
The Kerala government today sought a Rs 2,600-crore special package from the Centre as it reels from the deluge that left 223 dead in a fortnight and forced over 10 lakh people out of their homes. (PTI)