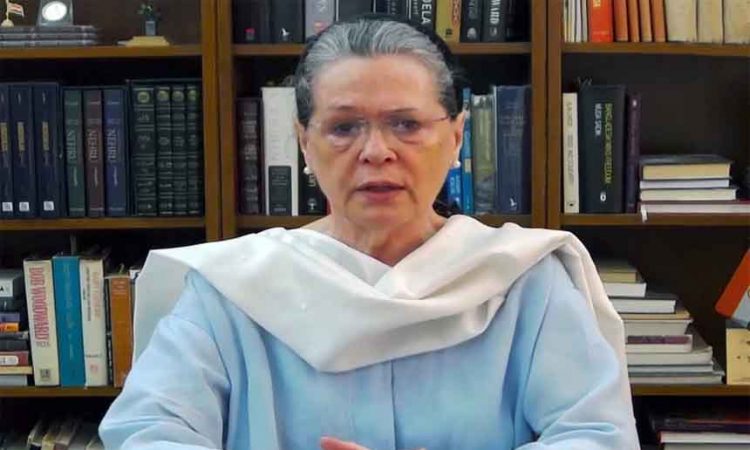 New Delhi, May 21: Congress president Sonia Gandhi on Friday accused the BJP-led government at the Centre of indulging in anti-people activities, playing with the future of farmers and acting against their interests by bringing new agriculture laws.

She praised the Congress government in Chhattisgarh, saying that it was trying to bring about a change in the lives of common people, particularly farmers, by empowering them financially.
Gandhi said this in a written message read out by Chief Minister Bhupesh Baghel at a function held at his official residence here to disburse cash benefits to farmers and cattle-rearers under two schemes of the state government on the occasion of former prime minister Rajiv Gandhi’s death anniversary.
In her message, she hailed the Bhupesh Baghel-led government saying that these schemes are a tribute in a true sense to Rajiv Gandhi.
“In the current situation, when the BJP government at the Centre is involved in anti-people activities, playing with the future of cultivators, taking every steps against interests of farmers by bringing laws (referring to new farms laws) and exploiting them, I am satisfied that Congress government in Chhattisgarh has been seriously fulfilling its poll promises,” Gandhi said in the message.
The government led by Mr Baghel has been continuously making efforts to bring happiness and change in lives of common people, particularly “annadata” (food providers), by economically empowering them, she said.
“Rajiv Gandhi ji always kept the interest of common people in his thoughts and resolution. He wanted to see farmers, workers, poor and backward people economically strong and happy. The step by Chhattisgarh government (to provide cash benefit to farmer and cattle rearers) on his death anniversary is a tribute in a true sense to him,” she added.
Virtually speaking on the occasion, AICC’s Chhattisgarh in-charge P L Punia slammed the Centre saying that while the Central Vista project is the priority of the union government, the Chhattisgarh government’s priority is its farmers and cattle-rearers.
Due to the coronavirus crisis, the state government has halted several of its major projects, including the new state assembly building, Governor house and CM house buildings, but overcoming the challenges, it provided cash benefits to farmers, which reflects its concern for them, he said.
On the occasion, Mr Baghel transferred a sum of Rs 1,500 crore into bank accounts of about 22 lakh farmers as the first instalment of agricultural input subsidy under the Rajiv Gandhi Kisan Nyay Yojna (RGKNY) for the kharif crop season 2020-21 for paddy cultivation.

Besides, Rs 7.17 crore were also transferred into the accounts of cattle-rearers as payment against the dung procurement between March 15 and May 15 under the Godhan Nyay Yojana.
The RGKNY scheme was launched on May 21 last year with an aim to encourage crop production in the state. Under this scheme, the state government had given Rs 5,628 crore at the rate of Rs 10,000 per acre to about 19 lakh farmers in kharif season 2019-20 in four installments for paddy cultivation.
In kharif season 2020-21, farmers will be provided an input subsidy of Rs 9,000 per acre for paddy cultivation. 9PTI)