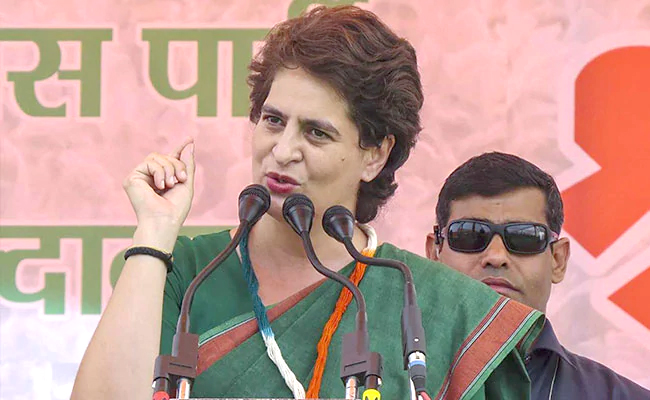 Addressing a “kisan panchayat” in Uttar Pradesh’s Bijnore, the Congress leader said farmers were ridiculed in Parliament and dubbed as traitors by ministers.
“The farmer who is standing on your door, his son is standing at the border of the country. The farmer whom you are insulting, his son is safeguarding the country’s border,” she said, referring to the protest against the farm laws at the Delhi borders.
“They were given a new name ”aandolanjivi” and ”parijivi”. All of you know the meaning of ”parijivi”. Your ministers called the farmers traitors,” she said.
She also criticised Haryana minister JP Dalal, who had stoked a controversy on Saturday, saying the farmers who died during the course of the agitation would have passed away even if they had stayed back home.
Stressing that “martyrdom” is a significant thing, she said, “No one has the right to raise a finger on a person who has attained martyrdom while protesting for his rights, be it the prime minister or any other minister.”
Attacking the prime minister, the Congress leader alleged that the central laws are not for farmers but for his capitalist friends.
“The country is not blind and every citizen is watching as to what is happening in the country for the past seven years. His capitalist friends are running the entire media, his capitalist friends run his elections,” she said.
“All big industries set up in the past 75 years have been sold and plans are afoot to sell the unsold ones. What will such a government do for you,” she asked.
Further lashing out at PM Modi, she said, “The prime minister can go to the US, hold a gathering for Trump, visit China and Pakistan, and there is no country which he has not visited. And you could not go two-three kilometres from your house and meet the farmers who are asking you to talk to them.”
“There are two types of leaders. There are some leaders who have a lot of arrogance and they forget as to who gave them power. In the history of the country, whenever a leader has become arrogant, the people of the country have taught him a lesson, and he feels ashamed,” she said.
“Then he understands what his religion is. His religion is not to divide people but to work for their development. Top priority should be given to the public and you (leader) should be behind them,” she said. (PTI)