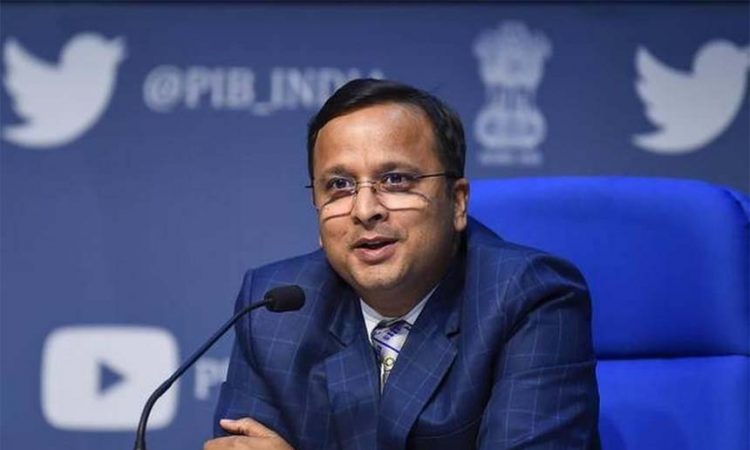 New Delhi, July 27: Districts with more than 10% COVID-19 positivity rate have increased to 54 from 46 over the last week, while the rate of decline of average daily cases has also slowed down, the government said on Tuesday, noting that these are a “cause of concern”.
Highlighting the surge in COVID-19 cases reported from some countries, officials said that though there is a consistent decline in the average daily new cases in India, the pandemic is far from over and the country has to remain alert.

Addressing a press conference, Joint Secretary Lav Agarwal said that in the week ending July 26, districts with more than 10 percent positivity rate increased to 54 from 46 in the previous week (July 14-20), which is a cause of concern.
These 54 districts are across 12 states and UTs, including Kerala (10), Manipur (10), Nagaland (7), Mizoram (6), Meghalaya (6), Arunanchal Pradesh (5) and Rajasthan (4).
Twenty-two districts in seven states — Kerala (7), Manipur (5), Meghalaya (3), Arunachal Pradesh (3), Maharashtra (2), Assam (1), Tripura (1) have reported an increasing trend in daily COVID-19 cases for the last four weeks and this is also a cause of concern, Agarwal said.
“There are eight districts, which were witnessing a decline in positivity rate, but are now seeing a rise in COVID-19 cases, he said, adding that “we cannot take the situation for granted”.
“The average daily new cases declined from 3,87,029 cases between May 5-11 to 38,090 cases between July 21- 27. In the past few weeks, there has been a slowdown/reduction in the rate of decline, which remains an area of concern,” Agarwal, said.
NITI Aayog Member (Health) Dr V K Paul said in some districts, where a decline was being seen, there is an increase in cases now.

“It may be a chance, an aberration but it is also a cause of concern that we need to be careful. The (second) wave has not finished and we may be tired but the virus is not tired. It is an alert for us,” he said.
“In eight districts positivity was coming down and in additional districts, positivity has increased, this indicates that things cannot be taken for granted, virus behaviour cannot be taken for granted.
“Vulnerable population is still there and though there is an increase in the population receiving the vaccination, it is not a full guarantee,” Paul said.
There has been a decline in new cases and they are found in limited geographies and are localised and but it is important that proper containment efforts, restrictions, social distancing and COVID-appropriate behaviour are followed in those areas to control the spread of infection,” Agarwal said.
Concerns about viral replication:
Talking about the surge in cases in Kerala and Northeastern states of Manipur, Sikkim, Mizoram and Nagaland, Paul said the positivity rate has gone beyond 10% in these areas.
“If we go by reproduction number then it goes beyond one in these areas,” he said.
Reproduction or reproduction number is a measure that highlights the number of people a coronavirus positive person infects, thereby reflecting the severity of the spread. A number of 1 or below 1 indicates a slowly spreading virus while any number above 1 indicates a rapid spread.
“It is 1.2 in Kerala, again it shows that virus replication is going on. Somehow it is a cause of satisfaction that mortality is not high but when there is so much virus replication there are problems…variants can emerge, other areas around these areas can get infected and the vulnerable population in any part of our country remains susceptible.

“We are emphasising the need for containment, the need for COVID appropriate behaviour, need to be vigilant, need to avoid unnecessary travel, large crowds in festivities,” he said.
Expressing happiness that new cases have gone below 30,000 for the first time in 132 days, he expressed the hope that it is sustained and “it declines further to a much much lower level” and said it is possible.
“Nonetheless, the first message is that the second wave is not over and some areas continue to remain a concern, some states in the Northeast and in south Kerala, in particular, remains a cause of concern and action,” he said.
Agarwal, however, said there is a progressive decrease in the number of districts reporting high cases. Districts with greater than 100 cases declined from 379 on 25th May 2021 to 121 on 25th June 2021
“We still have 62 districts with more than 100 cases but they are localised,” Agarwal also highlighted that a high surge in cases is being reported in other countries.
“Overall if we look from a global perspective, the pandemic is far from over. An increase in the number of cases across the world is being seen, which remains an area of concern. and we have to work on containment and management activities strictly to control the spread of the virus,” Agarwal underlined.
In this regard, Agarwal cited the US, France, Italy, Malaysia and Thailand where a high surge in cases has been noted in the last few days.
On vaccine availability in August, Paul said, “We have visibility of about 15 crore doses in August”.

Challenge of co-infection of vector-borne diseases in Monsoon:
The officials also highlighted the need for taking extra precautions to prevent co-infection of vector-borne diseases in monsoon season with COVID-19 as it may affect clinical management and patient outcomes
Agarwal said rains increase the risk of vector-borne diseases such as malaria, dengue, chikungunya as well as chances of food and water-borne diseases and other skin infections.
Greater risk of diseases like dengue, malaria, seasonal influenza, leptospirosis, chikungunya, enteric fever, etc. is coexisting in COVID cases.
“This poses challenges in clinical and laboratory diagnosis of COVID-19 and may affect clinical management and patient outcomes. We must ensure we do the right things to prevent co-infection,” Agarwal said.
He said basic preventive measures for COVID-19 and seasonal influenza – such as avoiding large gatherings, maintaining physical distance, hand hygiene & cough etiquette – have to be ensured
Source reduction of mosquito breeding sites should be implemented in all areas at risk of these diseases and ensuring timely vaccination of all doses of COVID-19 vaccine should be our priority.
The use of approved insect repellents and ITN/LLINs is effective against vector-borne diseases including scrub typhus.
Preventive measures against leptospirosis include wearing protective clothing for people at occupational risk and avoiding swimming in contaminated water.

Decision on reopening schools and vaccination of children:
Paul said the decision on reopening schools is largely being taken by the respective states.
“The overall approach by the central government from time to time has been (to suugest) which students can come and in what number they can come, but state governments are taking their own decisions.
“The schools have been closed for a long time and society is concerned about the learning loss but it is walking a tightrope and it is not an easy decision as on one hand there is a risk of infection that has to be weighed out on teaching and learning activities,” Paul said.
“When we open schools it is important that SOPs are followed. The teaching must be conducted in a manner which is COVID appropriate…that remains of paramount importance,” he said.
On vaccination of children, Agarwal said Bharat Biotech’s Covaxin and Zydus Cadilla’s vaccine clinical trials are going on and as soon as the results come which are robust enough, the experts will take a decision on when the vaccination of children can be allowed.
Responding to a question on the Delta Plus variant, Agarwal said, “Our vaccines have a minor change in efficacy for Delta plus variant but they are effective.
“DG ICMR has said that studies are going on Delta plus and data analysis is going on… as we have clarity, we will let you know,” he said. (PTI)