Soon after the signing of the Framework Agreement (FA) with the NSCN (IM), Interlocutor RN Ravi, held a series of consultative meetings with various civil society organizations, student bodies, mothers’ associations, and legislators in Nagaland. He also rushed to Imphal and held a series of consultative meetings with various civil society leaders including members of the Citizens Committee Manipur. He even told them that as part of finding a solution to the Naga issue, some kind of “autonomy” could be granted inside the Indian Constitution under the FA. He, however, did not elaborate on the type of autonomy. It was so significant that he flew to Imphal on two occasions for post-FA “consultative meetings.” Later, he also had two-day-long consultative meetings with stakeholders from Tirap, Changlang and Longding districts of Arunachal Pradesh.
One of his major achievements was bringing Naga National Political Groups (NNPGs) to the negotiating table after the Government of India had successfully signed the “Agreed Position” on November 17, 2017, with them.
In fact, civil society organizations in Nagaland were urging the Government of India to expedite the peace process. The emergence of the Core Committee of Nagaland Tribal Hohos and Civil Organizations (CCNTHCO) on the eve of the Nagaland Assembly Elections 2018 was to urge the Government of India to solve the Naga issue before the elections. They even sought the polls’ deferment so that an early solution to the Naga political issue can be reached.
The 12th Nagaland Legislative Assembly in its last session in December 2017 unanimously passed the resolution urging the Government of India to resolve the Naga political issue before the State Assembly Election 2018.
With all these development happening, Interlocutor Ravi was expected to take the peace process to a higher scale. All were watching his next move as to how he would take all stakeholders on board while finding the solution, which will be “One solution.” He often said, while holding consultative meetings with various civil society organizations in Nagaland, that “There will be no piecemeal solution to the Naga issue.”
But, all were taken aback by his appointment as the Governor of Nagaland. It was like a midnight surgical strike when his appointment as the Governor of Nagaland was announced on July 19, 2019. Interestingly, he would continue to hold duel charges – Governor of Nagaland, and Interlocutor for the Naga talk.
Nobody expected that a serving Interlocutor for the Naga talk would be sent to Nagaland as the Governor at that juncture, because they hoped that he would be pushing the peace process with unprecedented vigor to reach a settlement.
There was a mixed response to his appointment. Some hoped with his vast experience on the Naga issue, he as the Governor of Nagaland would be able to expedite the peace process. But many political pundits said he would have a lot of restrictions while dealing with the Naga issue because of his gubernatorial position in the State.
Surprisingly, within a week of his appointment as the Governor of Nagaland, he told NSCN (IM) leaders that the talk would be concluded within three months as desired by Prime Minister Narendra Modi. But they did not agree to the idea and questioned how it could be when they were yet to finalize on the “symbolic issues of a separate Naga flag and constitution.”
The NSCN (IM) saw it as a ploy to weaken the process already fragile. To them, it was like a two-pronged attack – setting a deadline for the conclusion of the talk before finalizing on the “symbolic issues” and Interlocutor’s becoming the Governor of Nagaland. They even said the talk had been reduced to a mere Governor’s level and demanded to restore the process to its earlier status that the talk should be held at the highest level (PM’s level), in a third country and without any pre-condition.
It may, however, be noted that what his predecessors (past Interlocutors) could not do, Ravi did it, that is, holding a series of consultative meetings with civil society organizations of Arunachal Pradesh and Manipur. You need to create an environment conducive to the peace process. Even demands for integration of Naga contiguous areas and sovereignty are no longer on the agenda of talk for a long time back. Regrettably, the Government of India has failed to see all these developments.
Although Ravi concluded the Naga talk on 31 October 2019, he failed to announce its outcome. Rather the Home Ministry stepped in and announced that the outcome would only be known after consulting with the States of Arunachal Pradesh, Assam, and Manipur. It has been more than a year since the talk had been concluded.
In spite of so many talks for pushing the Government of India to go ahead in signing the final accord, it can’t because it loses track. They are working now to find that lost track.
Today, we fail to know Ravi’s role in the Naga peace process as other players are seen in the process.
Oken Jeet Sandham 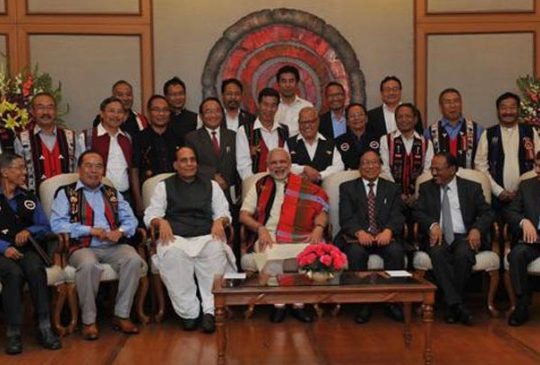 The essence of education