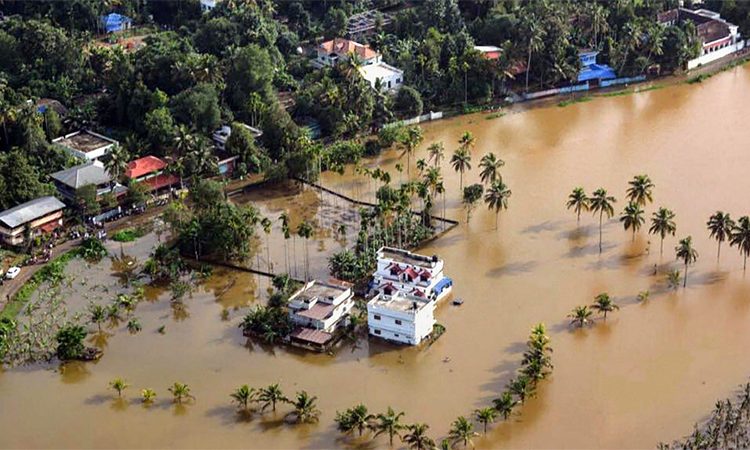 New Delhi, August 20: The Centre informed the Kerala High Court on Monday that there was no legal provision to declare a disaster as a national calamity, amid demands for declaring the floods as a national disaster.
In an affidavit, the Centre said it has treated the flood situation in Kerala as a “Disaster of Serious Nature” and has categorised the same as ‘L3 Level of Disaster’ under the National Disaster Management Guidelines.
“It is submitted that there is no provision in statutes or manuals to declare a disaster as a ‘national calamity’, howsoever big it may be.
“It is only an expression used in general parlance,” the Centre said. The affidavit was filed in a response to a petition filed for declaring the floods as a national disaster.
Besides Congress president Rahul Gandhi, the ruling Left Democratic Front (LDF) in the state and the opposition Congress had wanted the Centre to declare the floods a ‘national disaster’.
“Keeping in view the intensity and magnitude of the floods and landslides in Kerala, this is a calamity of a severe nature for all practical purposes,” a home ministry official said.
When a calamity is declared to be of ‘rare severity’/’severe nature’ support to the state government is provided at the national level. The Centre also considers additional assistance from the National Disaster Response Fund (NDRF).
A Calamity Relief Fund (CRF) is set up, with the corpus shared 3:1 between Centre and state. When resources in the CRF are inadequate, additional assistance is considered from the National Calamity Contingency Fund (NCCF), funded 100% by the Centre. Relief in repayment of loans or for grant of fresh loans to the persons affected on concessional terms, too, are considered once a calamity is declared “severe”.
An inter-ministerial team led by AV Dharma Reddy, joint secretary, ministry of home affairs, had visited Kerala on August 8 to assess the damage caused by the rains and floods.
Another official said that an inter-ministerial team visits a state in view of any natural disaster, it automatically considers is as calamity of severe nature.
Union home minister Rajnath Singh had visited the state on August 12 and declared an immediate assistance of Rs 100 crore to Kerala. Prime Minister Narendra Modi, during his visit to the state on August 16, had announced an aid of Rs 500 crore.
The central government has also decided to give ex-gratia of Rs 2 lakh each to the family of those killed in the floods and Rs 50,000 to the injured.
The compensation will be given from the Prime Minister’s Relief Fund.
With rains ebbing away, Kerala got some respite on Monday but faced the gigantic task of rehabilitating those rendered homeless and preventing outbreak of water-borne diseases, even as the death toll mounted to 216, officials said.
Over 7.24 lakh displaced people have been sheltered in 5,645 relief camps dotting the state, they said.
Lt. Gen. DR Soni, the chief of the Army’s Southern Command, told a press conference in Thiruvananthapuram that rescue operations are still continuing and drones are being used to assist in reaching people trapped in areas not easily accessible.
“The focus is on complete rehabilitation,” he said, adding 1,500 army personnel were engaged in rescue operations.
He said people stranded on rooftops and inaccessible areas were being winched with the help of defence helicopters.
Vice Admiral Girish Luthra, Flag Officer Commanding-in-Chief (FOC-in-C) of the Western Naval Command (WNC), said the situation is improving and the rescue operations are almost complete, with efforts now moving towards relief and rehabilitation.
“As far as the Navy is concerned, we have stepped up our efforts specifically in the last four-five days and today, as you know, the effort is moving more towards providing relief and subsequently towards rehabilitation,” Luthra told reporters.
Army personnel carrying satellite phones have fanned out to difficult to negotiate areas in search of stranded people, he said.
Meanwhile, six more bodies were recovered late on Sunday night a Paroor in Ernakulam district, local MLA VD Satheeshan said, taking the death toll in the current spell of floods since August 8 to 216.
Satheesan said almost all those stranded in Paroor and nearby areas have been rescued and moved to safety.
Efforts were now under way to clear the houses of the debris to make them habitable.
Kerala Water Authority and Kerala State Electricity Board were trying to restore water and power supply in vast areas that are without power and tap water for the last several days.
Commercial flight operations from the naval airport at Kochi commenced today with the first Air India flight from Bengaluru arriving on Monday morning.
Small aircraft are being operated from the naval airport as the Kochi International Airport has shut operations till August 26 following flooding of the runways.
Relief material from different parts of the country has started arriving at the port here to provide some succor to the people of Kerala devastated by unprecedented floods in about a century, officials said. (PTI)