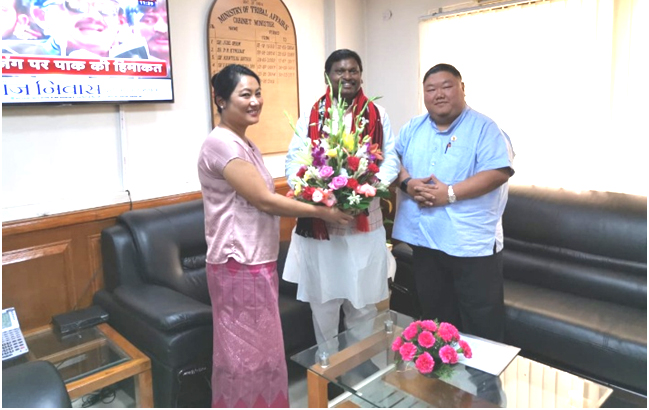 Dimapur, August 26: Union Minister for Tribal Affairs, ArjunMunda has assured all assistance to the newly created Department for Tribal Affairs in Nagaland, including a review of the current year’s projects/schemes along with consideration of additional project proposals for 2019-20 which will be carried out shortly.
The union minister’s assurance came after a State delegation led by Minister for Higher & Technical Education and Tribal Affairs, Temjen Imna Along apprised the union minister that the State’s Department of Tribal Affairs, which was a long-felt need, was created only recently in Nagaland after the approval of the Cabinet on August 2, 2019.
On the issue of various projects such as Minor Forest Produce (MFP) and Minimum Support Price (MSP) and development of value chain for MFP which fall under the Tribal Cooperative Marketing Development Federation (TRIFED) – an initiative of the Ministry of Tribal Affairs, Government of India to develop the socio-economic conditions of tribal in the country – the union minister expressed his happiness over the performance of DUDA and assured that the proposals sent by the Department will be taken up by the ministry.
It may be mentioned that the ministry had declared DUDA as one of the State implementing agencies for these projects from 2018-19. Under these projects, the department is actively involved in elevating the livelihood of farmers and MFP gatherers. 13 SHGs have also been set up and more SHGs are being covered in a phase-wise manner, said a press release issued by Kuolie Mere, PRO (IPR), Nagaland House, New Delhi.
Later in the afternoon, Temjenimna Along called on the chairman of AICTE Dr Anil D Sahasrabudhe accompanied by Kethosituo Sekhose, DRC and department officials of Technical Education, where issues regarding up-gradation of Khelhoshe Polytechnic, Atoizu and Government Polytechnic, Kohima and schemes available with the AICTE for the State were discussed.
The AICTE chairman informed that approval for up-gradation of the two polytechnics will be given by the end of this year and requested the State Government to give commitment for up-gradation of infrastructure and post creation at the earliest.
The AICTE is ready to provide funds for procurement of equipment for these institutes and all assistance necessary for preparation of DPRs, he said.
He also suggested the State Government to avail schemes for ground water harvesting, Internet WAN/LAN/Fiber Optics installations and solar power plants from AICTE for technical institutes of the State. (Page News Service)