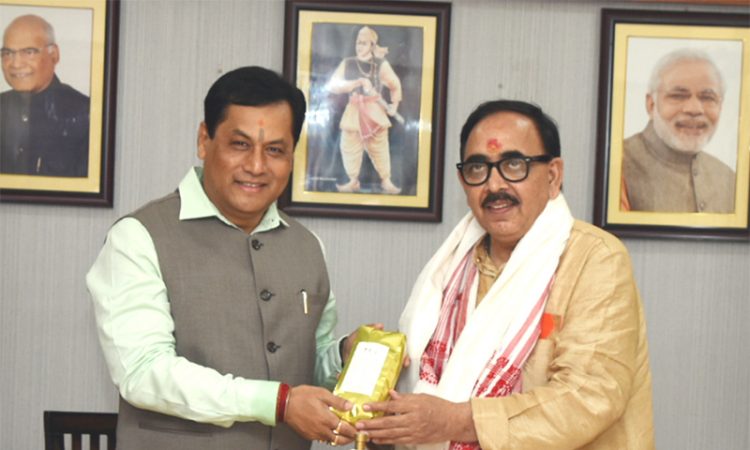 Dimapur, July 28: Union Minister for Skill Development and Entrepreneurship, Mahendra Nath Pandey today met Sarbananda Sonowal, Chief Minister of Assam to discuss how the Centre and State can further Prime Minister’s Skill India Mission in the State and empower the youth with market relevant skills to enhance their productivity and contribute to the economic development of the Northeastern region of the country.
The two ministers discussed and agreed to collaborate to set up the recently announced Skill University in the State aligning it to the national skill standards ensuring common framework and delivery in quality of training.
This meeting was in addition to a closed-door review meeting, organized by Ministry of Skill Development and Entrepreneurship in Guwahati late evening yesterday, on the work done so far in the North Eastern states of the country, on Saturday. The meeting was presided over by Mahendra Nath Pandey, Minister of Skill Development and Entrepreneurship. The meeting was attended by dignitaries from States including Skills Ministers namely – Chandra Mohan Patowary, Minister, Assam; Tumke Bagra, Minister,Arunachal Pradesh; Radhey Shyam, Minister, Manipur and Imnatiba, Minister, Nagaland.
The Minister reviewed all programs and schemes implemented across the eight states of Assam, Meghalaya, Mizoram, Sikkim, Arunachal Pradesh, Manipur, Nagaland, and Tripura.Thevarious schemes and programme, management structures and processes, enhanced infrastructure, and local challenges encountered within these initiatives were discussed at this session. The success of reaching out to 2.5 lakh youth is the biggest accomplishment for the ministry to be able to move towards achieving the aims of Skill India Mission, as envisioned by Prime Minister Narendra Modi.
Speaking on the occasion, Mahendra Nath Pandey, Minister of Skill Development & Entrepreneurship, said, “I feel such institutionalized interactions like this one between Central and State leaders, and policy makers, are crucial to the strategy of bringing in synergies and convergence across all initiatives of skill development in the country, and transform the lives of our youth. This brings with it peace, prosperity and all-round progress, a key goal for the government for the North-Eastern States. We are making continuous efforts to scale up existing efforts to enhance skill development in India, in the context of the country’s transition to a knowledge-based economy through the creation of a professional skilled workforce. It is important that we focus on the ‘Look East and Act East’ policy of government to ensure we achieve the goal of Kaushal Bharat Kushal Bharat of Skill India.”
The program and schemes like Pradhan Mantri Kaushal Vikas Yojana (PMKVY), Pradhan Mantri Kaushal Kendra (PMKK), Jan Shikshan Sansthan, Apprenticeship, Industrial Training Institutes (ITIs) and National Skill Training Institutes (NSTIs) were reviewed basis the consolidated data collected in past 4 years. Apart from talking about the performance metrics of the schemes and initiatives, the agenda of the meeting was also to discuss about various other important factors like building capacity of state skill missions and focus on job creation via tourism.
On strengthening of the ITIs and NSTIs in the Northeast region, it was discussed that there are 73 ITIs with seating capacity of 17,000, of which around 13,000 cater to the engineering or technical trades like electrician, auto-mechanics etc. There is a shortage of facility for training of trainers at these facilities. Ministry of Skill Development and Entrepreneurship decided to set up an NSTI in the region.
Manipur Government assured all support in setting up of the institute to fill in this gap, including provision of land. MSDE has also released Rs 60 lakhs towards upgrading of training equipment in Manipur.
Further, it was also decided that there will be a renewed focus on running local trade based short term courses (agriculture, fisheries etc.) in the NSTIs to reduce migration of labor from the State.
Pandey also visited the Indian Institute of Entrepreneurship (IIE) Guwahati which operates under the aegis of MSDE and has been focusing on creating an entrepreneurial climate through entrepreneurship education. It has been running short term activities/courses and workshops which assist in creating opportunities of employment leading sustainable livelihoods.
The Minister announced that the institute will be braced by a central government grant to support policy research, new content and curriculum development etc. at the campus.
In order to impact the grassroots and rural areas, the Institute would identify potential segments like agri/horticulture, and food processing, floriculture, crafts and handloom and handicrafts, bee-keeping, emerging service sectors like adventure tourism and use the cluster approach to deliver services for economics of scale and sustainability and ensuring the upscaling of enterprises.
The Minister, MSDE also visited the North East Skill Center running under Assam Skill Development Mission and was happy to see facilities being offered at the institute for the youth of the region. (Page News Service)