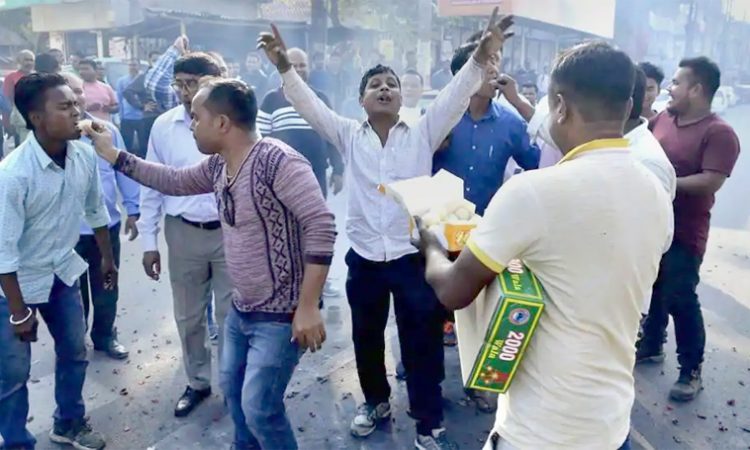 Guwahati, February 13: Thousands of protesters across northeast started celebrations on Wednesday afternoon after the Rajya Sabha was adjourned sine die without tabling the controversial Citizenship (Amendment) Bill, 2016.
Wth both Houses of Parliament being adjourned sine die – with no appointed date for resumption – on Wednesday, the contentious Citizenship (Amendment) Bill, 2016, is likely to lapse. The Budget session was the last Parliament session of the present government as the Lok Sabha polls are due this summer.
The CAB, which seeks to grant citizenship to non-Muslims from Bangladesh, Pakistan and Afghanistan, was passed in Lok Sabha last month and was expected to be tabled in the Rajya Sabha on Wednesday.
Protests against the proposed legislation had roiled the Northeast over fears that it might lead to surge of migration from Bangladesh to the region. Several of BJP’s allies in the region including chief ministers of two BJP-ruled states had expressed reservation on the bill.
As soon as news broke that the Bill was not tabled in Rajya Sabha, members of All Assam Students Union (AASU), who were protesting against the proposed legislation, burst crackers and distributed sweets at the student body’s head office in Guwahati.
Similar celebrations took place at several other locations where protesters took to the streets to celebrate the “historic win”.
“It is a historic day and victory for democracy. Due to the protests, the government didn’t dare to table the legislation. We have got a temporary relief,” said AASU general secretary Lurinjyoti Gogoi.
In Assam where a BJP-led coalition is in power, close to 100 organisations and groups belonging to indigenous communities have been protesting for past few months against the Bill.
“We have won and the people of Assam and NE have won. Indian democracy and its secular credentials have won. We thank all parties and groups who supported the protests against the legislation,” farmers rights activist Akhil Gogoi told journalists in New Delhi.
BJP’s ally in Assam, Asom Gana Parishad, had withdrawn support to the coalition last month in protest against CAB as it felt the legislation would go against provisions of Assam Accord of 1985, which sought identification and deportation of illegal immigrants who entered the state after March 24, 1971.
While the development was welcomed by most groups, organizations of Bengali speakers in Assam, mainly in Barak Valley where there was support for CAB, blamed the BJP.
“The Centre has been fooling Bengali speakers for a long time. They (BJP) knew they didn’t have majority in Rajya Sabha, so why did they not go for a joint session?” questioned Shantanu Mukherjee, coordinator of Bengali United Forum of Assam.
On January 29, ten political parties from the region including several past and present BJP allies had formed a joint front to oppose the CAB and lobby in Delhi against it.
Manipur chief minister N. Biren Singh who is heading a BJP-led coalition tweeted, “On behalf of the people of northeast and in particular Manipur, I would like to profusely thank PM Narendra Modiji, (BJP) President Amit Shahji, and HM Rajnath Singhji for not tabling the CAB and opting for consensus driven approach. We deeply appreciate your affection for NE”.
Manipur had witnessed large scale protests in recent weeks against the CAB with the government clamping curfew in two districts and suspending internet services.
“We appeal to BJP to withdraw it completely for it is a question of our identity and we will not sit quietly if it is pushed again,” said SM Jalal, one of the convenors of Peoples Alliance Manipur, an umbrella group protesting the legislation.
In Tripura, CPM state secretary Gautam Das said, “The result of prolonged protests in northeastern states opposing CAB got reflected in Rajya Sabha today. We congratulate all members of Parliament for this.”
National Peoples Party president and Meghalaya chief minister Conrad Sangma who had convened the meeting of regional parties in Guwahati to oppose the CAB has emerged as the hero of the moment.
“This is a great moment for all citizens of northeast as we all stood united to oppose the CAB. I would like to thank all the people who have been working tirelessly to oppose the bill and all political parties across the country who supported our cause,” Sangma said.
But senior BJP leader and Assam minister Himanta Biswa Sarma, a staunch advocate of the Bill said its non-passage would be detrimental for the state.
“If the bill is not passed, 17 assembly constituencies in Assam would go to the hands of Bangladeshi Muslims. Our party supports the bill. As of now we don’t have majority in Rajya Sabha, when we have it, we will pass the bill,” he told journalists. (Courtesy: HT)

Dimapur, February 13: With both Houses of Parliament being adjourned sine die – with no appointed date for resumption – on Wednesday without tabling the contentious Citizenship (Amendment) Bill, 2016, the North East Students’ Organization (NESO) has termed it as a ‘moral victory’ for the indigenous people of North East.
NESO comprises of the Khasi Students’ Union (KSU), All Assam Students’ Union (AASU), Naga Students’ Federation (NSF), Mizo Zirlai Pawl (MZP), Twipra Students’ Federation (TSF),  All Manipur Students’ Union (AMSU), Garo Students’ Union (GSU) and All Arunachal Pradesh Students’ Union (AAPSU).
Congratulating the entire indigenous people of North East, NESO said, “Through our united and concerted effort the Government of India has not been able to table the Citizenship (Amendment) Bill 2016 on the floor of the Rajya Sabha.”
“…we can achieve in stalling this Bill is only because of the united continuous movement of the people,” it said.
Stating that this also goes on to show that the Government of India will not concede to our demands on a platter but we have to fight and struggle for the protection and survival of the indigenous people of North East, the NESO also gave a strong warning to the Government of India not to adopt, implement policies which is detrimental to the interest of indigenous people of North East.
Meanwhile NESO has thanked all the component organizations who have worked very hard and sacrifice a lot to oppose the draconian Bill, and also thanked the different state governments of the North East who have taken a bold stand on the issue, notably the State Government of Meghalaya led by Conrad Sangma, Government of Mizoram led by Zoramthanga, the different students’ unions, social organizations, women organizations, etc. It also expressed gratitude to Nitish Kumar, Chief Minister of Bihar and his party the JD(U), Shiv Sena, Congress (I), SP, BJD, TMC, DMK, SAD, NPP, AGP,TDP, BPF and other political parties who have extended their support in opposing the Bill.
(Page News Service)