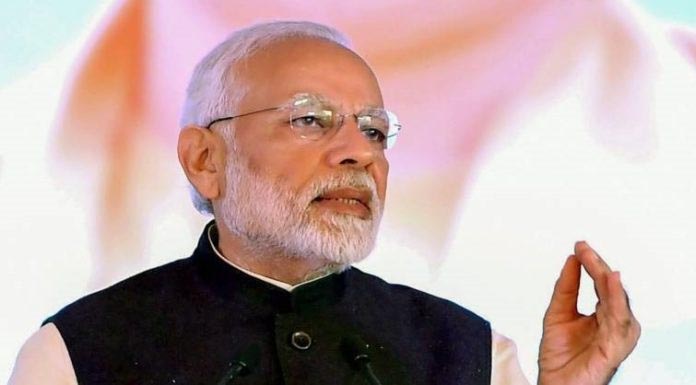 AHMEDABAD, December 22: Prime Minister Narendra Modi on Saturday cautioned the security establishment about “divisive elements” exploiting the caste fault lines for short term gains and pitched for isolating them at the grass-roots level.
He also urged police force to be vigilant in countering the “dark forces of radicalisation, and to engender trust among all communities across the nation”, a statement from his office said.
Addressing the annual DGP, IGP conference at Krvadiya in Gujarat, the prime minister noted that “caste fault lines are being exploited by divisive elements for short term gains”.
He urged police force to continue working for the unity and the integrity of India.
“Let us strengthen forces that promote unity and isolate divisive forces at the grass-roots level,” the statement said quoting PM Modi.
He praised police force for their success in countering terrorism, and limiting it to a small geographic area of the country.
He said the people of the country are, in particular, proud of police force in Jammu and Kashmir for their role in countering terrorists and successfully engaging them.
Addressing the valedictory event, PM Modi said police personnel work hard in adverse circumstances.
Yet, he added, they often do not receive the recognition they deserve. He called upon senior officers to work towards greater recognition of police personnel who work for the benefit of the people.
He said that social media can be used effectively for this purpose.
The prime minister emphasised on the need for capacity-building in police force on the subject of cyber security.
PM Modi also presented the President’s Police Medals for Distinguished Service to Intelligence Bureau officers. He congratulated and appreciated the medal winning officers of IB for their dedication and commitment to service.
The prime minister released a commemorative postage stamp on the National Police Memorial. He said the memorial should become a source of inspiration for all.
He launched the portal of the Cyber Coordination Centre. This is envisaged as an umbrella platform that will help law enforcement agencies coordinate their efforts to solve all cyber crimes and incidents. (PTI)