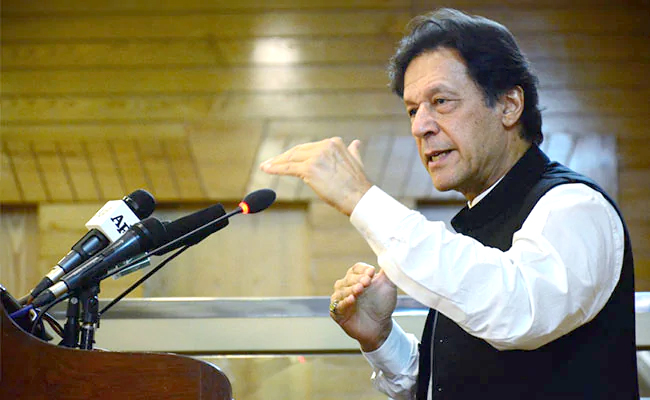 Colombo, February 25: Cash-strapped Pakistan has offered a USD 50 million new credit line to Sri Lanka to boost cooperation in defence and security sectors.
Pakistan Prime Minister Imran Khan announced the new credit line during his two-day visit to the island nation that concluded on Wednesday, according to a joint communique issued by the foreign ministries of the two countries.

“Both sides expressed satisfaction at the existing bilateral cooperation in the field of defence and noted that the elevation of staff-level talks to Defence Dialogue has further provided an opportunity to expand security sector relations. Prime Minister Imran Khan announced a new USD 50 million defence credit line facility,” the communique said.
The two sides stressed the need for stronger partnership for supporting and coordinating with each other in dealing with matters related to security, terrorism, organised crime and drug and narcotic trafficking as well as intelligence-sharing, it said.
Imran Khan met his Sri Lankan counterpart Mahinda Rajapaksa and President Gotabaya Rajapaksa during his visit in which they discussed areas of common interest like tourism, agriculture and trade ties.
“Thank you Prime Minister @PresRajapaksa and the people of Sri Lanka for a warm welcome and gracious hospitality. Sri Lanka is a special friend and strong partner. I agree that the cooperative ties between our two nations are poised to grow and strengthen,” Imran Khan said in a tweet.
Imran Khan also reiterated Pakistan’s support for the socio-economic development of Sri Lanka in line with the vision of a peaceful neighbourhood, Colombo Page reported.
The two countries reached a broad consensus on ways and means to further strengthen cooperation in a comprehensive manner and agreed to hold frequent meetings, promote high-level and delegation-level exchanges, and enhance the process of consultations, cooperation and coordination between their respective institutions, the report said.
Pakistan also announced to provide ? 52 million for the promotion of sports in Sri Lanka, according to the communique.
Pakistan also announced 100 scholarships in the field of medicines (MBBS and BDS) as part of the Pakistan-Sri Lanka Higher Education Cooperation Programme, the Dawn reported.
Cash-strapped Pakistan’s economic problems have worsened due to the coronavirus pandemic and Khan’s government is arranging finances from world bodies, including the International Monetary Fund, to tide over the crisis. (PTI)