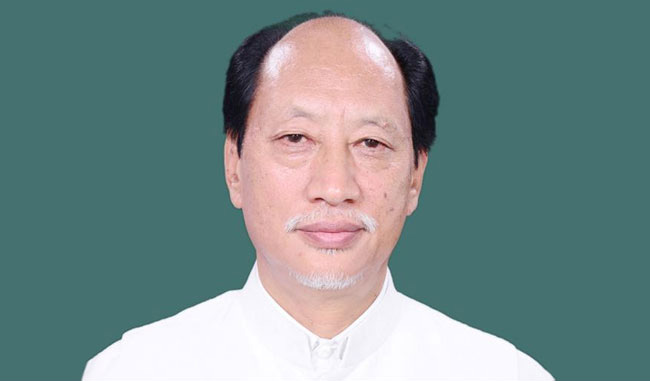 Nirendra Dev
New Delhi, September 13: Nagaland government’s role in the peace negotiations between the Centre and the Naga militants is like a ‘bridge’ between the two sides and the NDPP-led alliance government in the northeastern state is exactly doing the same to usher in an early solution to the issue, Chief Minister Neiphiu Rio has said here.
“Our role is of a facilitator and we are exactly doing the same…..,” Rio told UNI in an interview here.
Camping in Delhi for last few days, Rio, however, clarified that his present trip to the national capital is generally dedicated to meet central leaders for flood related assistance and for developmental works.
“But the parleys are on….Both sides – the government of India and National Socialist Council of Nagaland (Isak Muivah faction) have kept the talks on track,” he said.
Rio returned to Nagaland as the Chief Minister in March this year after quitting his Lok Sabha seat and is now heading an alliance regime which also has BJP as his major partner. He earlier served as the Chief Minister from 2003 to May 2014 and shifted to Delhi as state’s only Lok Sabha MP.
Rio said in his meeting with Union Home Minister Rajnath Singh and Minister for Road and Surface Transport Nitin Gadkari, he has placed various demands concerning the state’s requirement to tide over the crisis caused by the unprecedented floods and landslides.
“Our people are suffering much….the landslides have virtually changed the maps of various hill stations including the state capital Kohima. Several known neighbourhood localities like Naga Bazar are changed today. You may not recognize the new Kohima town,” he said.
Rio said the Kohima-Dimapur main National Highway is out of service for last six weeks and people are now moving on the alternative route via Merema-Zubza section.
Answering questions the Chief Minister said the central leaders have given him a patient hearing and assured that a ‘sympathetic’ decision will be taken soon.
Only for flood related relief and rehabilitation, the Nagaland government is accepting a central funding of Rs 400 crore at least as immediate relief.
In addition, Rio said substantial amount is accepted for roads and also a separate component for urban development and road communication works in urban areas.
“Things are moving in the right direction and the inter-ministerial central team led by a joint secretary in the Ministry of Home Affairs has already visited the state,” he said.
Rio thanked the role of Air Force and other central agencies as also the state government departments like Disaster Management Authority and said numerous sorties were made to airdrop essential supplies to the three remote affected districts of Tuensang, Kiphire and Phek.
Many parts of the state were cut off from the rest of the state for about 15 days and more in July-August, state government source said.
According to an estimate by the state government agencies, nearly 14% of the total population of the state were affected. These include at least 48,000 families in over 500 villages.
The state government is also keen to improve helicopter service for the people. But the Chief
Minister said the Centre is yet to allow extension of ‘flying hours’ in the state.
“Arunachal Pradesh has about 120 flying hours…. we have only 40. We asked them to enhance this timing. The state government cannot exceed the maximum flying hours guaranteed per month. Now we are operating one copter, may be if it is increased to 80-90 hours, we may increase it to two,” Rio said.