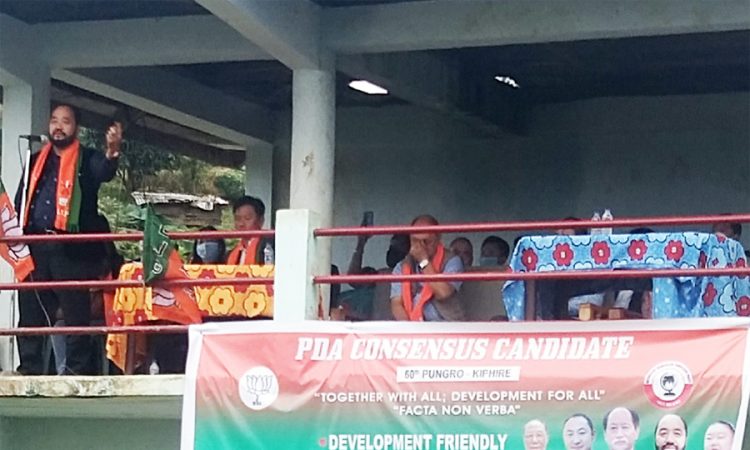 Kohima, October 26: Campaigning for the bye-elections is picking up momentum as political parties organised rallies to woo the voters.
Led by Deputy Chief Minister, Y. Patton, host of BJP leaders are campaigning in Pungro-Kiphire Assembly for their candidate Lirimong Sangtam, who is facing a tough challenge from Congress and independent candidates. The BJP today organised a rally at Pungro where several party key leaders addressed people-among them were Dy CM, Patton, PHED Minister, Jacob Zhimomi, Minister for Transport, Land Resources, Railways and Aviation, Paiwang Konyak, Advisor, Industries and Commerce, Imnatiba, Advisor, Tourism, Art and Culture, H. Khehovi, and Advisor, Fisheries, Evaluation and Economics and Statistics, L. Khumo, among.
The saffron brigade highlighted various welfare programmes being initiated by the BJP led National Democratic Alliance (NDA) government at the centre.
The party president, Temjen Imna Along was not part of today’s entourage, but he is expected to campaign soon in the constituency.
Congress leaders are also expected to kickoff campaign in Pungro-Kiphire bye-election.
In the last state general election this seat was won by Naga People’s Front (NPF), but this time there was no taker for the rooster party.
While in Southern Angami-1 constituency poll fever is high with several top state political leaders campaigning to woo voters. Today NPF organised a rally at Jakhama village, where former CM and Leader of the Opposition, TR Zeliang and former CM and party President, Dr. Shurhozelie Liezietsu addressed the gathering. They castigated the ruling People’s Democratic Alliance (PDA) for alleged failure in all fronts due to bad governance. They also highlighted the rally about the policies and programmes of the NPF party.
The two NPF leaders were accompanied by several top brass of the party.
Later in the evening Chief Minister, Neiphiu Rio along with party functionaries organised a public meeting at Kigwema village for NDPP candidate, Medo Yhokha. This will be his second poll campaign in the constituency. The NPF and an independent candidate are determined to give a tough contest to NDPP. There will be a triangular fight in this constituency.
Bye-election was necessitated after the demise of former Assembly Speaker, Vikho-o Yhoshu.
The two constituencies are bound for bye-election on November 3. (Page News Service)