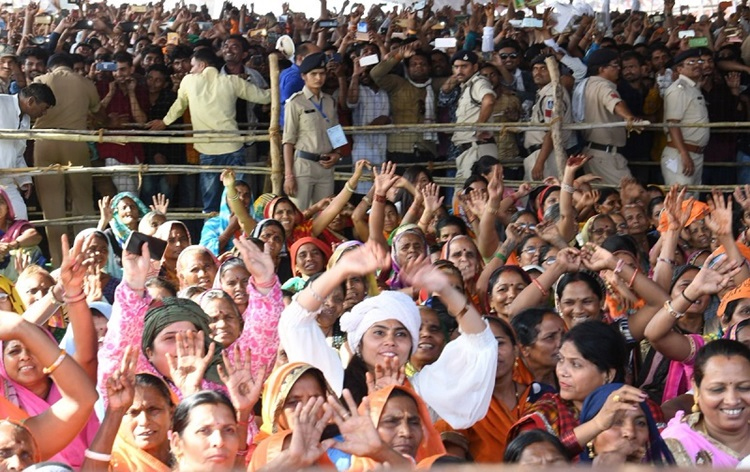 New Delhi, May 17: Campaigning for the last phase of the staggered Lok Sabha elections spread over more than a month drew to a close Friday as top leaders sought to muster a final show of strength in the contest for 59 seats with Prime Minister Narendra Modi among those in the fray.
Polling will be held on Sunday in the seventh phase in all 13 seats in Punjab, as many seats in Uttar Pradesh, nine in West Bengal, eight seats each in Bihar and Madhya Pradesh, four in Himachal Pradesh, three in Jharkhand and the lone seat Chandigarh.
Electioneering also drew to a close for the bypoll in Panaji, necessitated due to the death of former chief minister Manohar Parrikar in March.
In a first, campaigning in West Bengal came to an end 20 hours before the scheduled time on the orders of the Election Commission.
The poll body had Wednesday ordered campaigning in West Bengal constituencies to end at 10 pm on Thursday in the wake of violence between the BJP and the TMC in Kolkata during Amit Shah’s roadshow.
The campaign was marked by attacks and counter-attacks by leaders across the political spectrum and the use of derogatory language and objectionable remarks forced the EC to step in.
Adequate security arrangements have been made to conduct free, fair and peaceful elections, officials said.
BJP chief Amit Shah held a press conference in Delhi highlighting the government’s work.
Though Prime Minister Narendra Modi was by his side and made some opening remarks, he did not take any questions.
Congress chief Rahul Gandhi also addressed a press conference in which he hit at the BJP and the government of the state of affairs in the country.
In Punjab, the high-octane poll campaigning witnessed blistering attacks by the Congress, the SAD-BJP and AAP with 1984 anti-Sikh riots and desecration of religious scriptures remaining the central theme of the political narrative.
The polling will decide the fate of SAD chief Sukhbir Singh Badal, Punjab Congress president Sunil Jakhar and Aam Aadmi Party’s Punjab unit chief Bhagwant Mann and also of two union ministers Harsimrat Kaur Badal and Hardeep Singh Puri.
Bollywood actor Sunny Deol, making his maiden electoral debut from Gurdaspur, and several other political heavyweights including former union ministers and Congress nominees Manish Tewari (Anandpur Sahib) and Preneet Kaur (Patiala) are also in the fray.
The dust and din of campaigning also settled Friday for the lone Chandigark Lok Sabha seat which is witnessing three a cornered contest among BJP, Congress and AAP.
Sitting MP and BJP candidate Kirron Kher is seeking a re-election with her main rivals being former union minister Pawan Kumar Bansal (Cong) and AAP’s Harmohan Dhawan.
In Uttar Pradesh, Prime Minister Modi is seeking re-election from Varanasi. The seventh phase of the polls will also decide the fate of 10 other BJP leaders, including Union Minister Manoj Sinha, who is seeking reelection from Ghazipur, and Bhojpuri actor Ravi Kishan, who is trying to reclaim the saffron party’s stronghold Gorakhpur.
The polls will also decide the fate of eight candidates of Samajwadi Party and five of Bahujan Samaj Party of the SP-BSP alliance, which is being perceived as giving a tough fight to the BJP in the state.
The electioneering saw Priyanka holding two back-to-back roadshows in Kushinagar and Mirzapur during the day and Union minister Smriti Irani riding a scooty in Gorkahpur.
Eight Lok Sabha seats in Bihar and three in Jharkhand will witness elections on Sunday.
The constituencies which go to polls in Bihar on Sunday are Patna Sahib, Pataliputra, Arrah, Buxar, Sasaram, Karakat, Jehanabad and Nalanda. Seven of these were won by the NDA in 2014.
In Jharkhand, a total of 15 candidates are in the fray from Dumka, 14 candidates from Rajmahal and 13 candidates from Godda. In Dumka, eight-time MP and Jharkhand Mukti Morcha (JMM) president Shibu Soren is being challenged by BJP’s Sunil Soren.
The JMM and the Congress are part of the “Mahagathbandhan” (grand alliance) in Jharkhand.
Dewas, Ujjain, Mandsaur, Ratlam, Dhar, Indore, Khargone and Khandwa seats in Madhya Pradesh, all currently held by the BJP, will also go to polls on May 19. Former Union ministers Kantilal Bhuria, Arun Yadav are in the fray from Ratlam and Khandwa, the latter seeing a tough fight between Yadav and ex-MP BJP chief Nandkumar Singh Chauhan.
At the centre of the campaigning has been the Congress-led government’s farm loan waiver scheme, which has been debunked by the opposition BJP in the state.
Even Prime Minister Modi had raised the issue at his rallies and said the Kamal Nath government in MP was sending police and recovery notices to farmers rather than writing off their loans.
Congress chief Gandhi had hit back by claiming the loan waiver had benefited several lakh farmers and even showed papers at rallies to prove that loans of ex-chief minister Shivraj Singh Chouhan’s brother Rohit and nephew Niranjan had been written off.
Campaigning also ended Friday evening for elections to all four Lok Sabha constituencies in Himachal Pradesh. As many as 45 candidates, including five legislators, are in the fray.
Prime Minister Modi had addressed two rallies on May 10 and 13, whereas Shah held three rallies on May 12. Rahul Gandhi campaigned in the state even on the last day of electioneering and addressed a rally in Solan on Friday. (PTI)