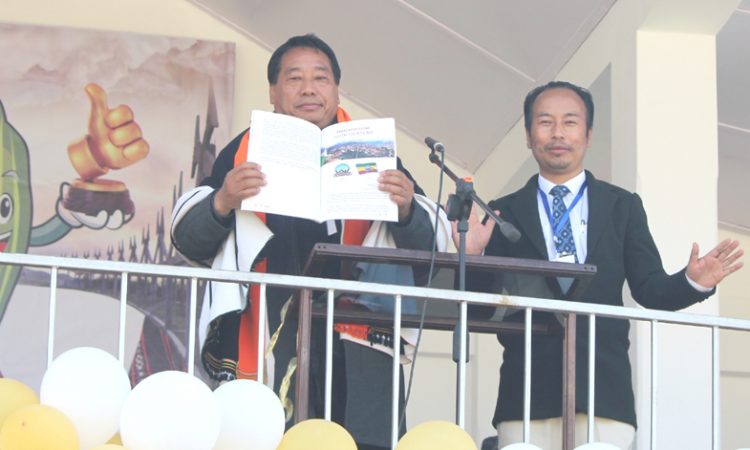 Phüsachodü, February 1: Chokri Area Games and Sports Association (CAGSA) 50th anniversary kick started here at Phüsachodü Village under Phek district on Monday.
Minister of PHED, Printing and Stationery, Government of Manipur, Losii Dikho, gracing the occasion as chief guest impressed upon the players to participate in games and sports with ambition rather than entertainment purpose.

While made a frequent appealed to all players to become the leaders of sports and bring changes in the society.
The minister said that sports can bring change, unity, and economic development, which in turn, brings change in the society, adding that richest persons in the world are sportspersons today, he added.
He was of the opinion that Naga people are energetic and can make it in the sports. Therefore, he urged leaders to identify players’ potential and promote them accordingly.
MLA Dr. Chotisüh Sazo urged the players to focus on doing better in their profession as players. He asked them to have aims to participate not only in the district or state level but at the Olympic (international) level. Maintain good discipline and try to make new friends during this CAGSA meet, he said.
President of Phek District Sports Association (PDSA) , Nezosa Teste-o informed that the PDSA meet will be held at Thenyizu village in the month of March, he also added that Naga style wrestling will be introduced for the sports meet where two wrestlers will represent each area units. He said CAGSA sports meet is a time to uplift and promote youngsters in the greater field, he hoped the participants will make the best use of it.
CAGSA President Vekhayi Rüho in his message to the players advised them not to be disheartened but to participate with their best.
In a press release from CAGSA media team, a total of 950 delegates from 11 villages under Chokri area in Phek district are taking part in the sports meet. The 11 participating villages included Thenyizu, Chetheba, Chesezu, Khulazu Basa, Khulazu Bawe, Thipüzu, Phüsachodü, Rükizu, Kikrüma, Chikri Nasa, and North Kikruma.
The nine-day long tournament will feature 7 track events for both the genders, 6 field events for men and 5 field events for women. The competition also includes football, volleyball, basketball, archery and arm wrestling. The 50th CAGSA meet will conclude on February 9. (Page News Service)