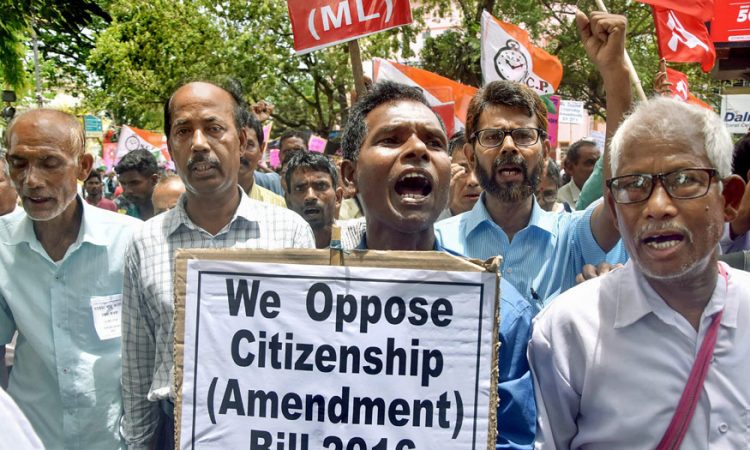 GUWAHATI, JANUARY 22: The controversy over the Citizenship (Amendment) Bill, 2016 has laid bare differences among state units of the Bharatiya Janata Party (BJP) in the Northeast.
With Lok Sabha elections few months away, some units are openly opposing the Bill that seeks to grant citizenship to Hindus, Sikhs, Christians, Parsis, Jains and Buddhists from Bangladesh, Pakistan and Afghanistan while others are voicing support for the legislation.
The Bill was passed in the Lok Sabha in the winter session of Parliament, but was stalled in the Rajya Sabha. Voting on it is expected in the Rajya Sabha during the budget session beginning January 31. There’s fear in the region that passage of the Bill could lead to large scale migration from Bangladesh and affect indigenous populations.
The Bill has sparked major protests across much of the Northeast and spurred the Asom Gana Parishad (AGP) to walk of the BJP-led Government in Assam last month. BJP general secretary Ram Madhav rushed to Guwahati last week in a fire-fighting mission after 5 MLAs of the ruling party in Assam openly voiced their opposition to the Bill as it would violate provisions of the Assam Accord, signed in 1985 after a 6-year agitation against illegal immigrants.
The Meghalaya unit BJP submitted a memorandum to Prime Minister Narendra Modi earlier this month opposing implementation of the Bill in Northeast. The party has 2 MLAs in the state and is a minor partner in the National Peoples’ Party-led Government in the state.
The Meghalaya Cabinet had last month passed a resolution opposing the Bill.
“We are also of the opinion that the Bill should be put on hold till we get some clarification regarding its impact on the region and in Meghalaya,” said David Kharsati, vice-president of BJP, Meghalaya.
The Mizoram unit of the party also is also opposed to the Bill in its present form and wants the state to be kept outside its purview. BJP has 1 MLA in the state where Mizo National Front came to power last month.
“The Bill in its present form could hurt interests of tribal and indigenous populations of Mizoram and the rest of Northeast. We are hopeful, the Centre won’t take any step which could upset our interests,” said Vanlal Hmuaka, general secretary of the BJP unit in Mizoram.
Unlike Mizoram and Meghalaya, the Nagaland unit of BJP is undecided on its stance on the Bill.
“The Bill in its present form may not affect Nagaland due to Article 371 (a) of the constitution. Right now we are studying the Bill and its positives and negatives. As a small tribal state, we want our culture and heritage to be protected,” said BJP state unit chief Temjen Imna Along, who is also a Minister in the Nationalist Democratic Progressive Party (NDPP)-led Government in the state.
According to Article 317 (a) of the Constitution, no Act passed in Parliament will have an impact on Naga religious and customary laws and practices, ownership and transfer of land and its resources.
In Manipur which is under a BJP Government, the local unit of the party wants the state to be exempted from the purview of the Bill.
BJP’s Manipur Pradesh chief spokesperson S Tikendra said that the party’s state unit wants to insert an exemption clause of the state from the purview of the Citizenship Bill.
“We also hope that the President will also give its consent to the Manipur People’s Bill 2018,” BJP’s Manipur Pradesh chief spokesperson S Tikendra said.
The Manipur Assembly passed the Manipur People’s Bill on July 23, 2018 in a move to regulate the entry and exit of non-Manipuris to and from the state.
On the other hand, the Citizenship Bill has got full support of the BJP’s state unit in Tripura, where the party is in power.
“There’s no difference in our party unit regarding the Bill. We all support it. Even the erstwhile royals of the state had provided shelter to those who migrated from Bangladesh. Some people are trying to mislead the public regarding the Bill,” said Tripura BJP unit general secretary Pratima Bhowmick.
On Sunday, Arunachal Pradesh Chief Minister Pema Khandu, who heads the BJP-led Government in the state, also voiced his support for the Bill and blamed people with vested interests of creating confusion regarding its provisions.
“Some people with vested interests are opposing the Bill with misinterpretations and creating confusion that it will have a negative impact on us. That is not true,” Khandu said.
“The Bill will not harm us (Arunachal Pradesh) as we are safe from any kind of infiltrators due to inner line permit (ILP) mechanism,” he added.
Any Indian citizen, who is not from Arunachal Pradesh, needs to get an ILP to enter the state. Similar provisions exist in Mizoram and Nagaland as well.(Courtesy: HT)