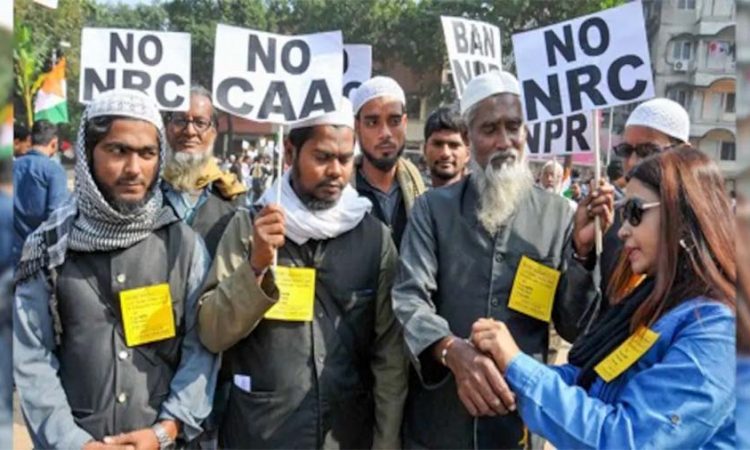 New Delhi, February 2: The Centre on Tuesday told the Parliament that the rules for Citizenship Amendment Act (CAA) may take six more months to be framed, while it is yet to take a decision to conduct a nationwide National Register of Citizens (NRC).
The Ministry of Home Affairs told Lok Sabha it has got an extension of time from Committees on Subordinate Legislation in both houses of Parliament to frame the rules for the law.

While the Lok Sabha committee has granted it time till April 9, 2021, the Rajya Sabha committee has extended the deadline till July 9, 2021.
In reply to a question on when the rules would be framed, MoS Home Nityanand Rai told Lok Sabha in a written reply, “The Citizenship (Amendment) Act, 2019 (CAA) has been notified on 12.12.2019 and has come into force w.e.f. 10.01.2020. The Rules under The Citizenship (Amendment) Act, 2019 (CAA) are under preparation. The Committees on Subordinate Legislation, Lok Sabha and Rajya Sabha have granted extension of time upto 09.04.2021 and 09.07.2021 respectively to frame these rules under the Citizenship (Amendment) Act, 2019 (CAA).”
The controversial legislation, which grants citizenship to illegal immigrants belonging to Hindu, Jain, Sikh, Parsi, Christian and Buddhist communities from Pakistan, Bangladesh and Afghanistan, was passed by Parliament amid vehement criticism from the Opposition that pointed out a communal agenda behind the law as it conspicuously left out Muslims.
The legislation has been interpreted in conjunction with repeated assertion by Home Minister Amit Shah before the legislation was passed that there would be nationwide exercise to prepare the National Register of Indian Citizens (NRC) to identify illegal immigrants. This was interpreted as a project to disenfranchise Muslims. While nationwide protests were seen following the passage of the law, multiple states have announced they would not implement the law.
The MHA has been deliberating the rules for over a year without any headway, say sources. The rules are essential for implementation of the Act. The rules are supposed to specify the kind of documents that would be needed to prove whether the applicant came to India before the cut-off date – fixed by the Act on December 31, 2014–or not.
It has to also decide the nature of documents or evidence that would be required from an applicant to prove that he came from the three countries mentioned in the Act. Notably, most illegal immigrants have entered the country without any travel documents.
Sources, however, said there would be no need to prove whether the applicant had faced religious persecution as a member of the minority community in the mentioned countries. “That would be deemed to be true. No one would have to prove religious persecution,” an MHA official said.
Before the law was passed, Home Minister Amit Shah had been announcing in rallies and press conferences that NRC would follow CAA and this created a narrative that it was for a nationwide NRC that CAA was being brought.
As protests erupted across the country following passage of CAA, the government tried hard to delink the two. While PM Narendra Modi announced in Delhi that there was no talk of NRC within the government, Shah subsequently said NRC was not on the government agenda yet. The government has repeated this multiple times since then.
No decision on NRC
In reply to recommendations of the Parliamentary Standing Committee Report on Ministry of Home Affairs with regard to the issue of fears associated with National Population Register (NPR) and Census, the government has said, “All individual-level information collected in Census are confidential. In Census, only aggregated data are released at various administrative levels. Like the earlier Censuses, wide publicity measures would be taken up for creating proper awareness among public so as to conduct and complete the Census 2021 successfully. Questionnaires for Census along with that of NPR have been tested at Pre-test conducted successfully across the country. It has been clarified at various levels in Government time and again that till now no decision has been taken to create National Register of Indian citizen.”
The committee—headed by Congress MP Anand Sharma–had in February last year observed that there is a lot of dissatisfaction and fear among the people regarding the upcoming NPR and Census. The “Action Taken” report on the same was on Tuesday tabled in Rajya Sabha.
“A 360-degree approach for communicating the right and clear message on the NPR has been planned to be followed. All kinds of media, i.e. social media, AV, Digital, Outdoor, print, and word of mouth publicity tools are part of the planned media strategy. Right kind of messaging will be done to tackle the miscommunication and rumors around NPR and Census 2021. However, in view of the outbreak of the Covid-19 pandemic, Phase I of Census 2021 and updation of NPR and other related field activities have been postponed until further orders,” the government has said in the report.
The committee was also of the view that Aadhaar data should be used in the upcoming Census to reduce the duplicity and wastage of expenditure. To this, the government has replied that NPR and Aadhar are separate exercises with the former collecting more detailed data. “Aadhaar number has been developed as a separate database which is being used only for de-duplication purpose and authentication of beneficiaries of various Government schemes,” the government reply has said.
The Committee in its final observation has, however, noted that Aadhar already has biometric information of the individuals and so the already stored Aadhaar metadata of the individuals may be used in creating a family database for the upcoming Census and updation of NPR.
“The Committee also reiterates its recommendation that all the States/UTs should be fully convinced on various issues pertaining to the upcoming updation of NPR to have a national consensus so that there is absolute clarity and no apprehension among remaining people across the country which will help in conducting these exercises in a smooth manner,” the report has said.

Following controversies around the NRC and the Citizenship Amendment Act, several states had said they would not implement the NPR exercise.
The Committee has also flagged the slow progress of road construction in Left Wing Extremism areas of the country. It has said that out of 9,338 km sanctioned roads under Road Connectivity Project for LWE Affected Areas (RCPLWE) only 1,796 km length of roads have been completed.
“The Committee would like to know the reasons regarding abysmally slow progress in completion of these roads specially with respect to Telangana where 147 km has been completed out of 705 km and Chhattisgarh where 319 km has been completed out of 2479 km. The Committee is of the view that delay in construction of roads in most sensitive LWE areas like Telangana and Chhattisgarh is also a reason for slowing down the inclusion and development processes of these regions and negatively affecting the capability of CAPFs/ State police in tackling the LWE menace,” the report has said. (Courtesy: Indian Express)