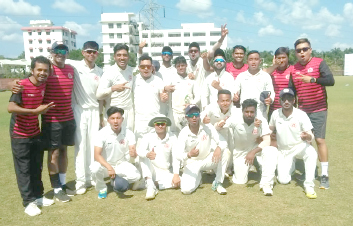 Dimapur, November 4: A day after Nagaland cricket team won its debut Ranji trophy match in Dimapur, the Nagaland U-23 team participating in the C K Naydu (U-23) Men’s trophy beat Sikkim with a record margin of 346 runs and an innings at Bhubaneswar today.
In the four-day match, Sikkim scored 146 and 142 in its 1st and 2nd innings respectively as they failed to defend Nagaland bowlers.
In the first inning, Nagaland’s Nagaho and Nadim shattered Sikkim’s innings claiming 4 wickets each and bowling them out at 146. Md Saptula was the highest scorer at 66 runs, while Yogesh and Afzar contributed 18 and 17 runs respectively.
In the first innings, Nagaland put up a mammoth total of 634 for 5 declared, which saw a double century from Vinayak (214) and two centuries from T Valmik (156) and Arvind (100 n.o.). Samrat and Puchu added 88 and 34 runs respective to their team.
For Sikkim, Akash took 2 wickets while Md Saptula and Md Ronak claimed 1 each.
In their 2nd innings, Sikkim were bundled out at 142 with Yogesh scoring 53 with his bat, while Afzar and Md Rhonak contributed 22 and 10 runs respectively. (Page News Service)