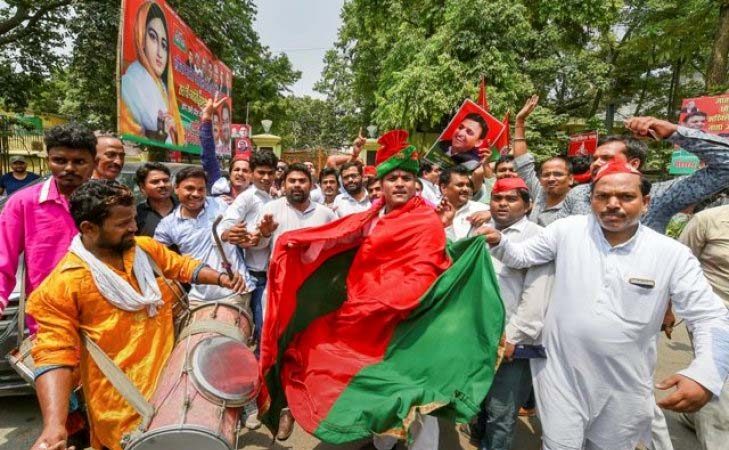 NEW DELHI/LUCKNOW/MUMBAI/PATNA, May 31: In a big setback to the ruling BJP, opposition parties on Thursday won 11 bypolls, limiting the saffron party and its allies to just three. The opposition made impressive gains in the bypolls to 4 Lok Sabha and 10 Assembly seats spread across 11 states — riding high on strengthening non-BJP unity in run-up to the 2019 general elections.
With prestige at stake in every single bypoll, the BJP lost the high-profile Kairana Lok Sabha seat in politically important Uttar Pradesh to a united Opposition after a communally-charged election campaign. The party also lost the Bhandara-Gondiya Lok Sabha seat in Maharashtra.
However, the BJP retained another Lok Sabha seat from Maharashtra, Palghar, where it had faced a challenge from its own ally Shiv Sena. BJP’s Rajendra Gavit won the seat defeating Shiv Sena’s Shrinivas Wanaga by 29574 votes. In Palghar, the opposition could not pose a united fight.
The fourth Lok Sabha seat, Nagaland, for which bypoll was held earlier this week went in favour of the Nationalist Democratic Progressive Party (NDPP), a BJP allly in the northeastern state.
While the Lok Sabha bypoll results appeared equally divided at 2-2 between the BJP-plus-allies and the opposition parties, figures for the 10 assembly bypolls came as a big setback for the ruling party which could manage just one (in Uttarakhand), while Congress bagged three (in Meghalaya, Karnataka and Punjab’s Shahkot) and others got 6 — JMM got two in Jharkhand, while CPM, SP, RJD and Trinamool 1 each in Kerala, UP, Bihar and West Bengal, respectively.
The results appeared more slanted against the BJP after taking into account the parties that had won these seats before bypolls were necessitated. While the BJP alliance retained two Lok Sabha seats — one in Maharashtra and another in Nagaland — it failed to retain two others — UP’s Kairana and Maharashtra’s Bhandara-Gondiya.
Similarly in 10 assembly seats, the BJP and its allies failed to retain seats like Noorpur in UP and Shahkot in Punjab, while the opposition parties such as Congress, CPM, Jharkhand Mukti Morcha and Trinamool retained their respective seats.
The BJP retained Tharali assembly seat in Uttarakhand, but Samajwadi Party snatched Noorpur in neighbouring UP from the saffron party. SP’s Naeemul Hasan cruised ahead of his nearest BJP rival Avni Singh to win this seat.
In Bihar, opposition RJD won Jokihat assembly seat by defeating BJP’s ally JD(U) by a huge margin. The result was being seen as a big jolt to Chief Minister Nitish Kumar who dumped the RJD and Congress last year to join hands with the BJP to form a new coalition government in Bihar.
Rashtriya Lok Dal’s Tabassum Hasan, supported by the Congress, Samajwadi Party and the Bahujan Samaj Party, established an early lead over Mriganka Singh right from the beginning to establish an almost invincible lead by noon.
In Maharashtra, the BJP retained Palghar but was staring at defeat in the Bhandara-Gondiya Lok Sabha constituency, which the BJP had won in the 2014 elections. The NCP’s Madhukar Kukade was leading over the BJP’s Hemant Patle, as per latest trends.
The Congress has won one assembly seat in Maharashtra without any contest after all other parties withdrew their candidates.
Punjab’s ruling Congress candidate Hardev Singh Ladi wrested the Shahkot assembly seat from the Shiromani Akali Dal, defeating the party’s nominee Naib Singh Kohar with a margin of 38,801 votes, an election office spokesperson said.
Chief Minister Amarinder Singh hailed the Congress victory as a “vindication” of the government’s people-centric policies, a rejection of the “negative” politics of SAD and “decimation” of AAP.
Trinamool’s Dulal Das won Maheshtala assembly bypoll in West Bengal, defeating BJP’s Sujit Kumar Ghosh by 62,827 votes.
Kerala’s ruling CPI(M)-led LDF’s Saji Cheriyan also won the Chengannur Assembly bypoll by a huge margin of 20,956 votes over his nearest Congress rival D Vijaykumar, while the BJP candidate came third.
JMM retained both Silli and Gomia assembly seats in Jharkhand. In Gomia, JMM’s Babita Devi defeated AJSU nominee Lambodar Mahto by 13,00 votes while BJP’s nominee Madhavlal Singh stood third on the seat.
In Silli, JMM’s Seema Mahto defeated AJSU chief and former state Deputy Chief Minister Sudesh Mahto by 13,000 votes. (PTI)