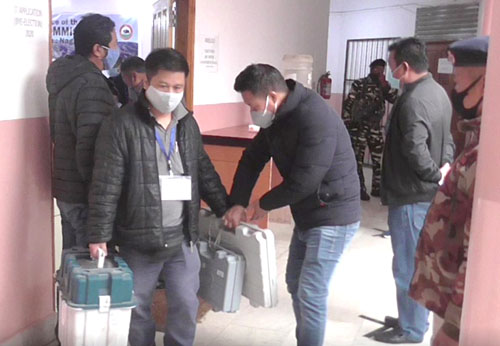 KOHIMA, NOVEMBER 2: Nagaland is all geared to conduct free and fair bye-election to two Assembly segments on Tuesday following all COVID-19 safety norms alongside deployment of adequate security forces, said Chief Electoral Officer (CEO) Abhijit Sinha.
The two seats ~ 14-Southern Angami-I and 60-Pungro-Kiphire Assembly constituencies were vacant following the demise of the sitting MLAs – then Speaker Vikho-o Yhoshü of the ruling Nationalist Democratic Progressive Party and Opposition Naga People’s Front (NPF) MLA T Torechu respectively.
Both of them died in December 2019, however due to the COVID-19 pandemic the bye-elections were delayed beyond 6 months.
Altogether 8 candidates ~ 4 from political parties and 5 Independents are in fray for the two seats.
Three candidates ~ ruling NDPP nominee Medo Yhokha, Opposition NPF Kikovi Kirha and Independent Seyievilie Peter Zashumo are contesting for the 14-Southern Angami-I seat.
For 60-Pungro-Kiphire seat, 5 candidates, namely Khaseo Anar of Congress, Lirimong Sangtam of BJP and 3e Independents – K Shellumthong, T Yangseo Sangtam and Kiusumew Yimchunger are in the fray.
Voting is scheduled from 6 a.m. to 4 p.m. on November 3, he said, adding that an hour has been added to the poll time so as to provide enough time to the electorate as all COVID-19 SOPs will have to be followed.
A total of 99 polling stations have been set up to conduct the bye-polls ~ 22 in the Southern Angami-1 A/C and 77 for 60-Pungro-Kiphire A/C.
According to the electoral data, there are about 13,641 electors, including 53 service voters under the 14-Southern Angami-1 A/C with Polling Station No. 2 in Phesama Lower having highest 1011 electors and Polling Station 13 (Mitelephe) lowest 155 electors.
The 60-Pungro-Kiphire Constituency has 29,601, including 101 service voters with Polling Station No. 6 (Rest House Ward ‘A’ Kiphire Town) having highest 990 voters and Polling State No 64 (Kiuro Village) the least with 45 electors.
Besides the postal ballots, the CEO informed that out of the total electorates, altogether 348 had applied to cast votes from their home, especially voters above 80 years of age, sick and COVID-19 infected have exercised their franchise.
This includes 152 in Kohima and 196 in Kiphire district, he said.
As a preventive measure against the spread of COVID-9, Sinha said every voter will be thermal scanned for the infection on the polling day for which thermal scanners have been provided to all polling parties.
Voter, detected with symptoms of COVID-19, would be asked to exercise their franchise only in the last hour of polling, he said.
Sinha also informed that a token would be given to all the electorate entering the polling station area so as to avoid lengthy queues and waiting for a longer duration.
Protective kits including face masks, gloves, hand sanitizers will be made available in all the polling stations, he said.
Hand gloves would be also given to each elector before signing on the voter’s registration and pressing the button on EVM to cast their votes in the polling booths, he said adding that coming out of the polling booths, the hand gloves must be thrown into dustbins.
Demarcation for social distancing between electorates has been made in every polling station, he said.
The CEO informed that more than 50% of the polling stations in Southern Angami-I and 40% in Pungro-Kiphire have been identified as critical and vulnerable.
As such, he said the entire polling proceedings would be monitored under live webcams.
All 22 polling stations in Kohima and 23 in Kiphire will have webcams besides offline video recordings in all the polling stations for a free and fair election, he asserted.
Sufficient deployment of security personnel has been made with CRPF and CISF guarding the critical and vulnerable polling stations while IRB jawans are placed in sensitive ones and Nagaland Armed Police in normal polling stations, he said.
Meanwhile, the CEO appealed to the electorates to definitely come and exercise their franchise in a free and fair manner but also take all precaution against COVID-19 by following all laid down protocols.
(Page News Service)