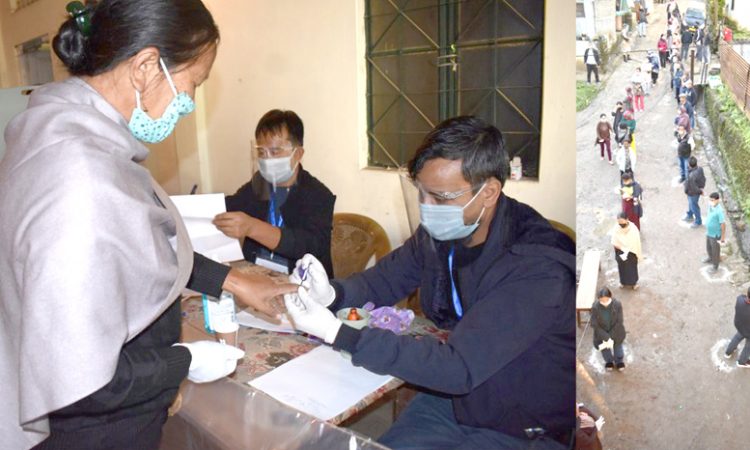 Polling for bye-election to 14 Southern Angami-1 A/C was conducted with strict adherence to COVID-19 protocol on Tuesday. (DPRO Kohima)

KOHIMA, NOVEMBER 3: Amidst tight security and strict adherence to the COVID-19 protocol, approximate 87.1% voters exercised their franchise in the bye-elections to two Assembly seats in Nagaland on Tuesday, said CEO Nagaland Abhijit Sinha.
Briefing media persons at his chamber here, Sinha said a total of 84.41% votes were cast in the 22 polling stations, under 14-Southern Angami-I constituency, under Kohima district, while 60-Pungro-Kiphire segment, which has 77 polling stations saw a turnout of 89.8% electors.
A total of 13,641 people were eligible to cast their votes in 22 polling stations in Southern Angami-1 and 29,601 people in 77 polling booths in Pungro Kiphire, Sinha said.
Webcast and static video recordings were done in all the polling booths to ensure free and fair elections, the CEO said.
While the entire voting process throughout the day was ‘by and large peaceful’ without any major untoward incident, except for complaints and counter-complaints from ruling Nationalist Democratic Progressive Party (NDPP) and Opposition Naga Peoples’ Front (NPF) under Southern Angami-I seat but it didn’t disturb the polling, he said.
However, he said when the Returning Officer (RO) and District Election Officer (DEO) reached the spot things were normal.
Nonetheless, he said that videos circulating in social media show political party leaders and elected members of the ruling party visiting the polling station jurisdiction in Jakhama village, which as per the Model Code of Conduct should not happen as they are not from the constituency.
In Pungro-Kiphire, out of the 77 polling stations voting in Singrep village had to be adjourned due to disturbance of peace following clashes between supporters of two parties. The RO and DEO, Kiphire, have also submitted the report while the date would be fixed for a fresh poll in the said polling station, he said.
Adequate security personnel were deployed and COVID-19 safety measures were put in place for smooth conduct of the bye-elections, Sinha said.
On the experience of conducting elections during the pandemic, he said that all measures were followed within the 100 meter radius of the polling stations and there were not many hurdles except for deploying an extra Polling Officer and training on COVID-19 safety norms.
The bye-elections to Southern Angami-1 and Pungro Kiphire seats were necessitated following the deaths of the then Assembly speaker Vikho-o Yhoshu and T Torechu of the Naga People’s Front respectively in December 2019.
(Page News Service)