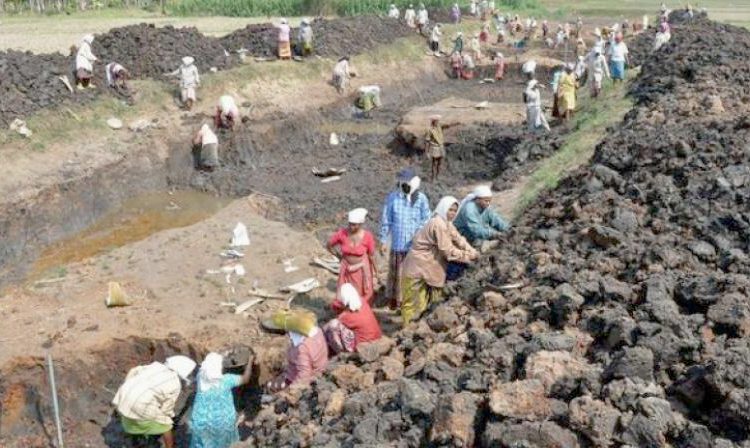 Mumbai, June 17: The Bharatiya Janata Party-led government may have to take recourse of MGNREGA to kick start the rural economy despite the previous criticism of the scheme by Prime Minister Narendra Modi when he was chief minister of Gujarat. Farm crisis resulted in farmers protest during the first term of Modi government.
NREGA may be crucial for Modi government’s efforts to quell farm distress. Modi 1.0 has raised the allocation for NREGA scheme on almost all the five Budgets. As per as per the revised estimates, this year the outlay is less than the previous year’s. However, finance minister Nirmala Sitharaman may have to raise allocation for NREGA to alleviate agrarian crisis, as reported by Financial Express.
The allocation for NREGA had been cut in comparison with the previous year in the interim budget presented in February. Prime Minister Modi has enthusiastically supported NREGA and significantly increased its resource allocation over the last five years. Officially called core of the core schemes or socially most vital schemes, NREGA is one of 6 such schemes of central government.
As per the revised estimates given in interim budget, in 2018-19 the Union government spent over Rs 84,000 crore on these six schemes. Of total spending on these schemes, NREGA’s share alone is nearly three-fourths. Including MGNREGA, Modi government decreased the cumulative budget for the six schemes.
In his interim budget speech the then finance minister Piyush Goyal had informed the Lok Sabha that Rs 60,000 crore have been allocated to MGNREGA scheme. This marked a jump of nearly 9 per cent over the previous year’s allocation.
However, an examination of budget paper would uncover that this allotment of Rs 60,000 crore, which was projected as an increase of 9% was without a doubt a decrease of over Rs 1,000 crore in comparison with the past year allocation.
In spite of the fact that the Modi government had marked Rs 55,000 crore for NREGA in 2018 budget, the factual investment on MGNREGA was over Rs 61,084 crore, about 2% more.
The budget allotment for NREGA for this year is compared with the factual investing for the past year as per the revised estimates given within the interim budget then for rural employment guarantee scheme has come down by about 2 per cent or Rs 1,084 crore, and it has not increased by Rs 5,000 crore or by more than 9% as projected by the government. (Agencies)