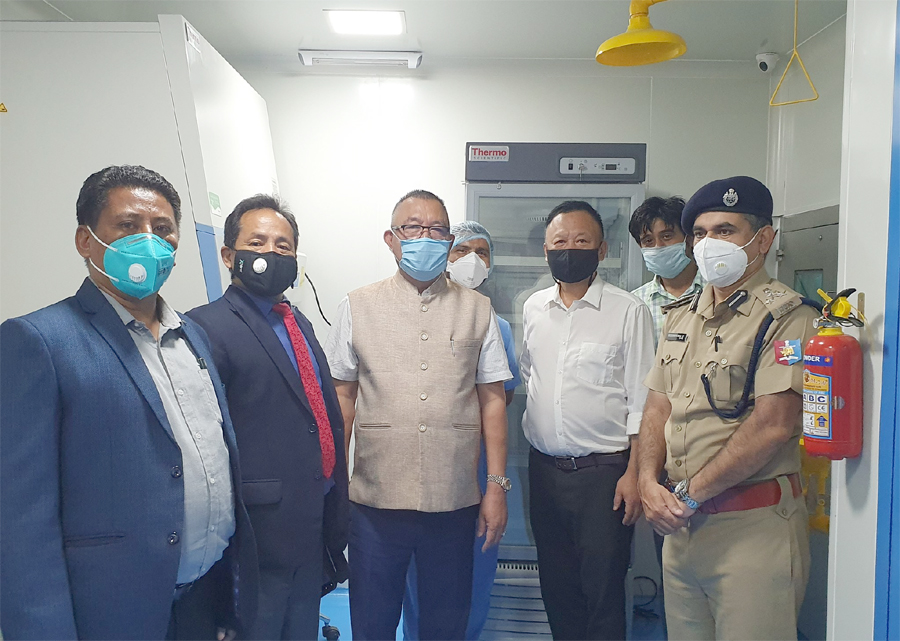 Inaugurating the Lab, Pangnyu said initially there was a lot of communication gap which also led to the Tuensang fiasco, but he is glad that the people of Eastern Nagaland has kept up a good spirit.

Expressing that the success of installing this Lab in a minimum span of time owes mainly to the cooperation extended by the people, civil societies, NGOs and Student bodies, Phom conveyed his gratitude for their support and hardwork.

“Let us realize and regret what we could not do. With the inauguration of this Lab, I appeal that you take guardianship, ownership and undertake developmental activities,” said Phom, further asserting, “This lab is not just for Tuensang but for all the rest of Eastern Naga districts.”

“I believe that through this lab, we can save so many lives, and even our unborn generation will be benefited,” he added.

Phom also expressed gratitude to the state Government for making the objective of establishing a BSL-2 Lab in Tuensang a reality and further appreciated the leaders of Tuensang and the district administration for continually coordinating and working towards achieving this facility.

In a short speech, Haiying maintained that the people of Tuensang have been very cooperative and supportive and expected that the same would be upheld even in the future.

Appreciating the District Task Force, he expressed his appreciation to all those involved in tackling the pandemic.

Toshi Wungtung, in his short speech, also mentioned that this Lab would be a “center for healing and cure.”

“This is an addition to the national productivity asset”, he stated.

He  appreciated the senior scientists and engineers for completing the much needed lab to fight the COVID pandemic in time. He also highlighted on the government’s need of labs in urgency.

Research, analysis and proper infrastructures are very important to diagnose so that right treatment and right medication can be served, he said.

This is a big launch pad which will give big relief to the citizen not only in medical field but also will help a lot in expenditures and timely administration of the diseases with accurate diagnosis which can target the cure and heal specifically, he said.

The prime motto of this hospital should be “cure and heal centre” with right information and right medication so that Tuensang have a civilized health making biggest medical zone inclusive of neighbouring district and even beyond borders, he added.

Kevichusa Medikhru, Mission Director NHM appreciated the technicians for the speedy work and the government in fulfilling the dream of Tuensang by installing the BSL -2 Lab. He also highlighted that the construction of the Lab cost government around 5 crores in purchasing equipments and other civil works. The lab will be functional with two research scientists, two well trained professional lab techs, data entry operator and a lab assistant, he said.

CKS President, Nungsanglemba Chang, on behalf of Eastern Nagas also conveyed his gratitude to the Chief Minister of Nagaland, Neiphiu Rio for his concern for Eastern Naga people.

He mentioned that this Lab would be a center for Eastern Nagas, and encouraged “the people to be sincere in our place and to work hard.”