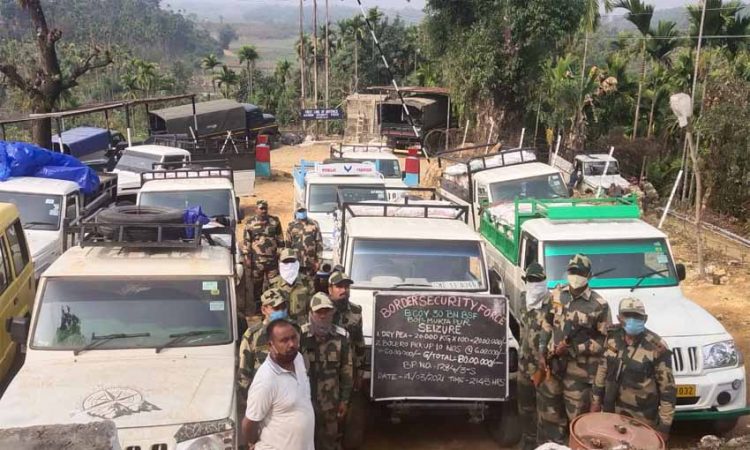 Shillong, March 2: The BSF has seized 20,000 kg of smuggled dry peas worth over Rs 20 lakh from Meghalaya’s West Jaintia Hills district, an official said on Tuesday.
The dry peas were smuggled from Bangladesh, the official said.

Acting on a tip-off, the BSF launched a special operation and intercepted 10 mini-trucks loaded with 20,000 kg of dry peas at an area under Muktapur police station in the district on Monday night, a BSF spokesperson said in a statement.
The seizure, however, did not go without protest as smugglers outnumbered the BSF personnel and the police, he said.
“Aggressive villagers confronted BSF personnel and the pick-up vehicles managed to escape. On pursuit with the escaped vehicles, the villagers started pelting stones and empty bottles on BSF personnel,” the spokesperson said.
To prevent the situation from going out of control, the BSF fired one round of non-lethal weapon in the air, he said.
According to the BSF, smuggling of dry peas from Bangladesh to India is prevalent in the area as in the past two months alone, eight smugglers along with 3.33 lakh kg of dry peas worth Rs 3 crore approximately have been seized, the BSF official said.
BSF Meghalaya Frontier IG Hardeep Singh said in a statement, “The BSF is making all effort by putting in all the resources to curb the smuggling along the India-Bangladesh border and this menace of smuggling is required to be tackled collectively by all concerned government agencies.” (PTI)