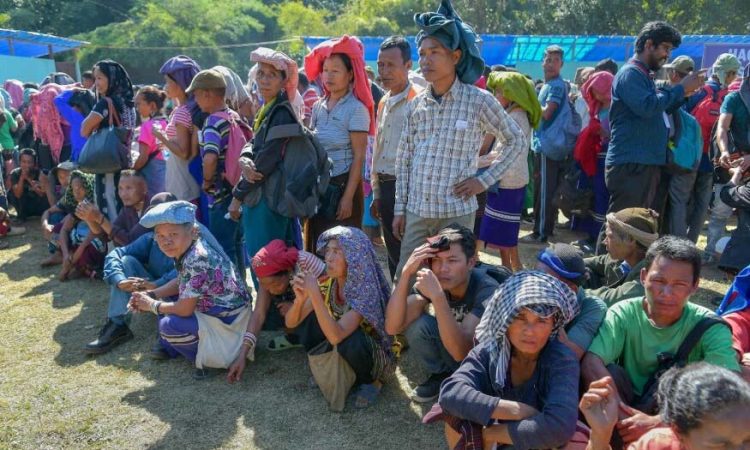 Agartala, November 13: Brus lodged in relief camps of North Tripura district since 1997 have demanded permanent residential and scheduled tribe certificates during the ongoing process of their resettlement in Tripura, an umbrella organisation of the displaced people said.

The Tripura government has already initiated the process for rehabilitating 33,000 displaced Brus from neighbouring Mizoram, an official said.
Thousands of Bru community people have been living in relief camps in two sub-divisions of North Tripura district since 1997. They had fled Mizoram to reach the neighbouring state because of ethnic clashes.
An agreement was signed by representatives of the Brus, the central, Tripura and Mizoram governments in New Delhi on January 16 this year allowing those, who refused to vacate the relief camps and return to Mizoram, to settle permanently in Tripura after living in the state for around 23 years.
Bruno Msha, the general secretary of Mizoram Bru displaced peoples Forum (MBDPF), in a letter to the Tripura Chief Secretary, Manoj Kumar, this week has demanded issuance of ST and permanent residence certificates for the Brus.
The Centre had sanctioned Rs 600 crore as rehabilitation package for 33,000 displaced Brus as a final solution to the vexed problem after signing the quadripartite agreement in January this year.
Under the agreement, Rs 4 lakh will be given to each Bru family in a fixed deposit account, Rs 5,000 per month for two years, a plot of land in Tripura, Rs 1.5 lakh to build houses and ration for two years.
The package also included Eklavya residential schools, permanent resident of Tripura certificate (PRTC) and Scheduled Tribe certificate.
The official said, 15 places have been selected for rehabilitation of the Brus in North Tripura, Dhalai, Unakoti, Sipahijala and Khowai districts on September 19 after a series of discussions with Law Minister Ratan Lal Nath, Chief Secretary Manoj Kumar and revenue officials.
Meanwhile, Joint Movement Committee (JMC) of Kanchanpur sub-division in North Tripura district has decided to launch an indefinite protest against the government’s decision to settle around 6,000 displaced Bru families in the sub-division.
The JMC, comprising Nagarik Surakhsa Mancha and Mizo Convention of the sub-division, had organised a series of protests demanding that the Brus be settled in all the eight districts of Tripura.
Dr Zairemthiama Pachuau, chairman of the committee, told reporters, “We had a meeting with the district magistrate of North Tripura District and we received some kind of assurance that maximum 1,500 families will settle here.
“But now they are trying to settle 6,000 families. If they go ahead with this, the entire sub-division will be affected environmentally, ecologicaly, socially and demographically which is not acceptable.”
The Bru issue started from September, 1997, following demands of a separate autonomous district council by carving out areas of western Mizoram adjoining Bangladesh and Tripura.
The situation was aggravated by the murder of a forest guard in the Dampa Tiger Reserve in western Mizoram by Bru National Liberation Front insurgents on October 21 that year.
The first attempt to repatriate the Brus from Tripura was made in November 2009.
The Centre, along with the governments of Tripura and Mizoram, had been trying to repatriate them to their home state over the past one decade, with little success. (PTI)